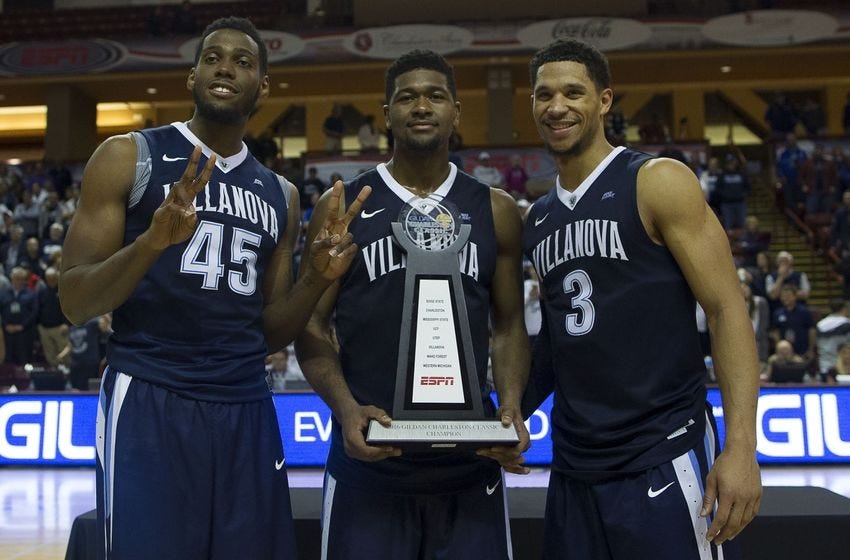 I don’t care if it’s not the same as it was when we were growing up. You still hear Big East Tournament at Madison Square Garden and you still get a little giddy. While the ACC Tournament has always been the staple for me and my favorite (especially when in Greensboro), the Big East is the conference tournament that drew everyone in. With this ‘new’ Big East, the conference tournament may have lost some of its luster, but it’s still been a pretty crazy couple of years at MSG. Here’s how this year’s bracket looks where Villanova is the heavy favorite yet again: 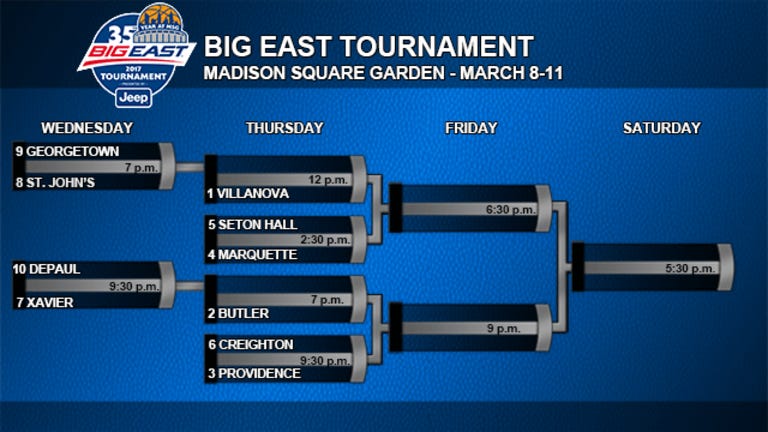 Odds: For those that like some sweat. These are the odds via Oddsshark: 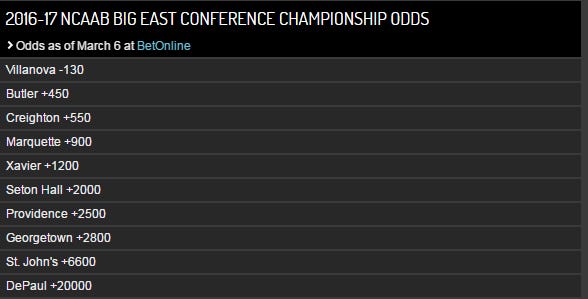 Bubble Teams that Need a Win: There are approximately 45 bubble teams in the Big East, but no one needs a win more than Xavier. If you lose to DePaul you have zero right being in the NCAA Tournament. After them, Providence could use another win, Seton Hall and Marquette.

Value team to take: I’m going to go with Providence here just edging out Seton Hall. The reason simply being the Friars wouldn’t see Villanova to the title game and could have the bracket open up for them in the bottom half. They get a depleted Creighton team followed by a Butler team that showed they can lose to anyone (while beating anyone too). Providence just throws a bunch of dudes between 6’6″-6’8″ out there and dare teams to guard them. It’s incredibly fun to watch.

Players to Watch: I think it’s safe to say everyone knows about Villanova’s players. That’s simply what happens when you are the reigning national champs.  But, what about the guys that the casual fan aren’t too familiar with? Here are five to watch:

Angel Delgado (Seton Hall) – I absolutely love his game and he does not get enough pub across the country like he should. The way we talk about Caleb Swanigan going out and getting double-doubles, we should talk about Delgado because he does the same thing. He leads the country at 13.1 rebounds per game.

Kyron Cartwright (Providence) – When you talk about guys who improved their game, Kyron Cartwright is at the top of the list. He’s fourth in the country with 6.8 assists per game and is able to stay on the floor without getting in foul trouble. In terms of Providence’s uptempo offense, he’s the reason why they can get out and run.

Justin Patton (Creighton) – Similar to how we talked about John Collins of Wake Forest and Robert Williams of Texas A&M, you want to watch Patton for the NBA Draft. He’s a guy that could be a lottery pick. Patton’s slapping up 13 points a game, but is really efficient from the field, shooting 69%.

Shamorie Ponds (St. John’s) – In a year where freshmen across the country are grabbing headlines, Shamorie Ponds has been that freshman in the Big East. He’s fifth in the conference in scoring at 17.6 points per game and can get hot. Playing at MSG as a kid from Brooklyn could lead to a big game.

Kamar Baldwin (Butler) – Another freshman to make the list, Baldwin has been a staple for Butler, especially late in games. He’s averaging over 10 a game and is shooting 38.5% from the 3-point line. Don’t be surprised to see Butler draw up a play for him if they are in a close game.

1. Villanova getting back on the right track

I’ve talked about this in a blog a couple weeks ago. Villanova’s shooting has absolutely fallen off as the season has gone on. It’s a combination of fatigue and teams taking away Josh Hart, which is letting Jalen Brunson attack the paint. Well they’ve had some time to rest now and should have Darryl Reynolds back (as close to healthy as possible) for the Big East Tournament. If they can get hot at MSG, it gives them confidence as they will likely head back to MSG for the Sweet 16 and Elite Eight.

The Big East had a pretty solid last weekend of the regular season as the bubble teams all got wins, with the biggest being Seton Hall on the road at Butler. Similar to the B1G a lot of these teams are expected to be seeded somewhere between 6-11, so what can they do to position themselves? Can a Marquette or Providence make a run and get to title game and jump up a seed line or two? Can Xavier avoid the First Four?

3. Can Marquette get a quality win without the asterisk

I think it’s safe to say Marquette is in the NCAA Tournament. However, that won’t stop people from poking at the resume where four of the wins (Xavier twice and Creighton twice) came after Sumner and Watson tore their ACL. They do have the home win over Villanova and a neutral court win over Vanderbilt to start the season. A neutral court win over Seton Hall? Well, it becomes even harder to poke fun at their resume as that’s another quality win.

Semifinals: No. 1 Villanova over No. 5 Seton Hall, No. 3 Providence over No. 2 Butler

Finals: No. 3 Providence over No. 1 Villanova

Why Providence?: Villanova will be in the title game, that’s not a question. But, they are worried about another national title than a Big East title. Simply, Providence can get hot and will get hot at MSG to win another Big East Tournament. Ed Cooley is a great coach and the fact Providence just throws these guys who are all 6’6″-6’8″ out there, it becomes a matchup nightmare for most teams. Add in the fact they are deep, they are made for this sort of event. They have 10 guys who play over 9 minutes a game. That will go a long way here. Not to mention the balance, where they don’t rely on just one guy to get hot.