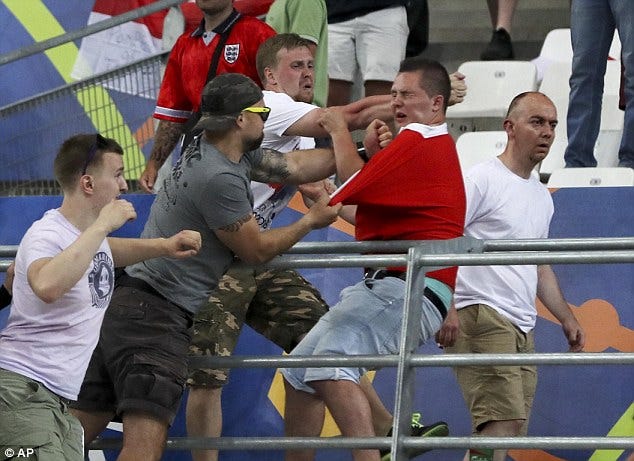 ESPN – A radical idea of turning football hooliganism into a sport has been proposed by Russian politician Igor Lebedev.

With less than 18 months to go until Russia hosts the World Cup, Lebedev has drafted rules for a “draka” — the Russian word for fight — featuring 20 unarmed combatants on each side.

The MP for the Liberal Democrat Party, who gained notoriety last year when he seemed to encourage Russian hooligans at Euro 2016, further stated that the event could attract as many spectators as a football match.

Yes. Yes. Yes. A thousand million times yes. Very rarely do I ever agree with something that comes out of Russia. But “Draka” is one of the best ideas I’ve heard in 2017 so far. Because think about it. You’re never going to stop hooliganism in futbol. You’re never going to stop drunk fans from fighting each other at any sporting event. From the World Cup to any NFL game to any little league game in the summer where the alcoholic dads who think their son is the next Bryce Harper get a little too sauced up. When there are sports being played and alcohol being consumed, you’re going to find yourself a brawl or two in the crowd. This shit has been going on since the days of gladiators and jousting tournaments. What makes anybody ever think that you can just eradicate it out of human nature? So instead of trying to get rid of hooliganism, this fucking GENIUS in Russia has decided to make a sport out of it. A way in which you no longer have to condemn fan violence and you can actually make money off of it. You strap all these psychopaths up with GoPros and then just broadcast the unedited footage. Here’s what you can expect from Draka.

Tell me that’s not something you would watch religiously. Tell me that a 20v20 fight with a bunch of savages trying to murder each other wouldn’t be appointment television. I’m not too thrilled with the “unarmed” aspect of Draka so far. Hopefully that just means no guns or knives. Because a huge part of hooliganism is being creative in your destruction. Using whatever is at your disposal to inflict damage on the other group. Whether that is with chairs, glass bottles, your shoe, whatever. Fist on fist combat is great and everything but I’m trying to see some serious carnage here. At least keep the non-lethal weaponry involved.

So this sport starts in Russia. Within a few years, it makes its way over to the United States. Everybody loves to talk shit on Philly fans for being a bunch of uncivilized neanderthals. Everybody loves to talk shit on Philly and talk shit on what a bunch of unruly assholes our fans are. Well guess what, dickbags? How the turntables when we now get to fight for sport in the parking lots. You show up to a tailgate on Broad Street, you’re getting curb stomped professionally from now on. It’s no longer just Tony from South Philly sucker punching you in the back of the knees because he’s all liquored up and you just said “Die Eagles Die”. But it’s because he’s a professional athlete now who plays Draka and gets paid to beat you to death in a parking lot. I don’t know how we’d stack up against some of the scumbags from California but I do know that if Draka becomes a legitimate sport and makes its way to the United States, Philly will be in the championship year after year.