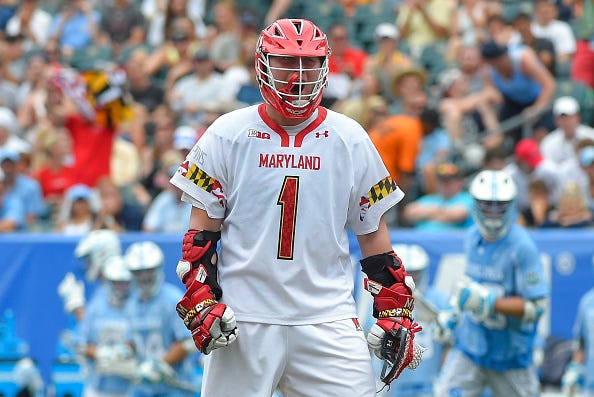 We’re still more than 2 full months away from Memorial Day Weekend but you won’t see many better weekends in college lacrosse this year than March 4th and 5th. Here’s just a little taste of what we’ll be seeing this weekend.

That’s 5 top 20 matchups. 10 of the best 20 teams in the country will be playing each other this weekend and 3 of them are top 10 matchups. Do yourself a favor right now and cancel any plans you’ve made for Saturday and Sunday afternoon. This is a lax weekend and nothing else matters. We also have an appetizer to this weekend’s schedule with Hopkins taking on Princeton this afternoon. Joel Tinney vs Michael Sowers. Shit is about to pop off. But before we talk about what to look forward to in the games this weekend, let’s take a look at the current USILA rankings and see who has made some moves over the past week. 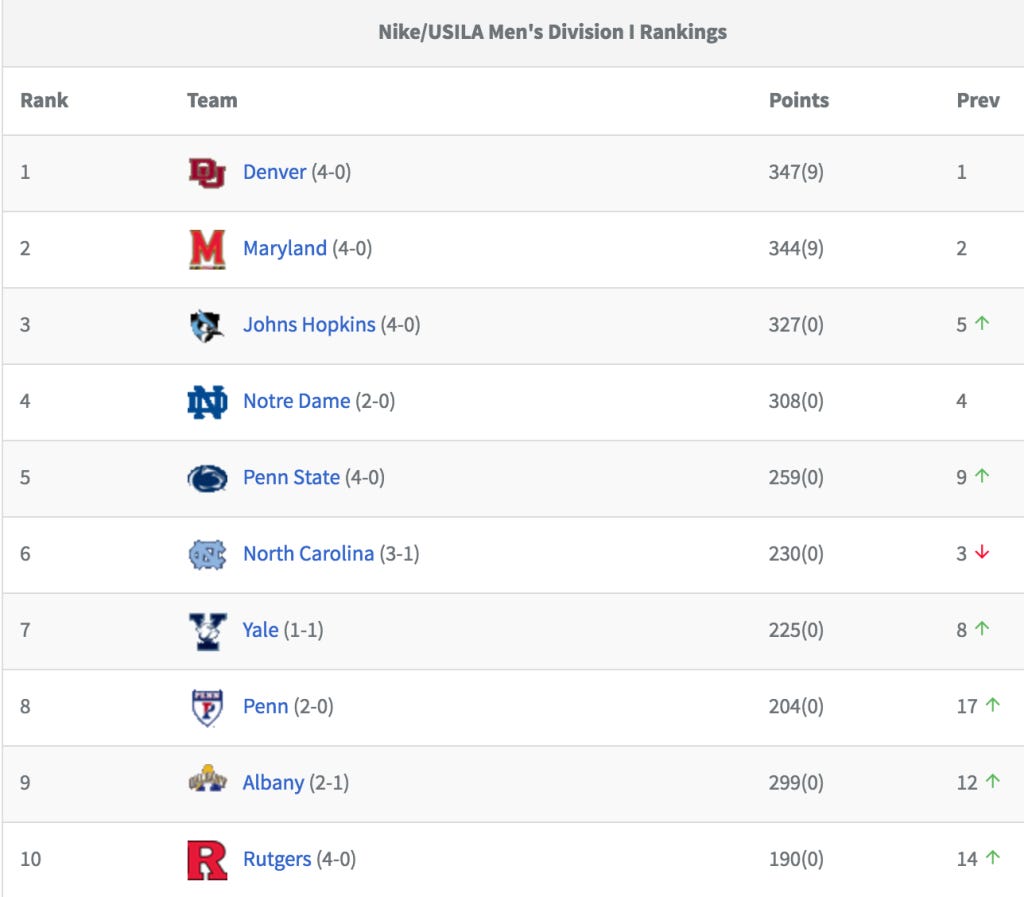 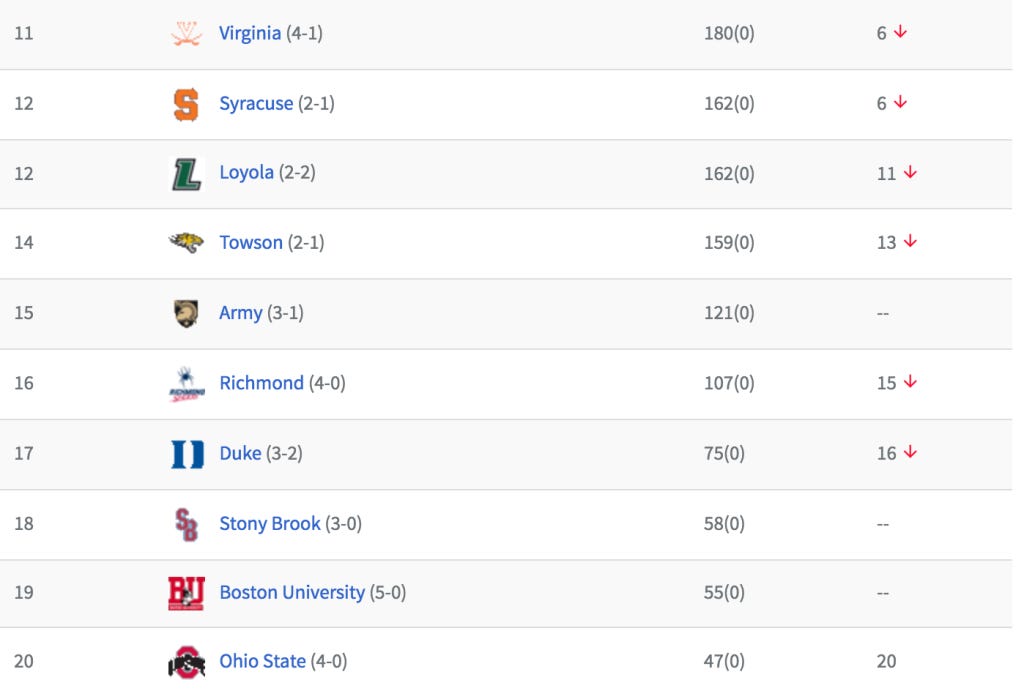 – So some of the biggest moves we’ve seen since last week are the Penn State Nittany Lions moving up from #9 to #5. They’re 4-0 to start the season with their lone win of the week coming off a 17-12 win over Nova last Saturday. Just 4 games into his collegiate career, freshman Mac O’Keefe leads the nation in points with 27 and goals with 24. TWENTY FOUR GOALS in just 4 games. Are you kidding me? This kid is a freshman and he’s average 6 G’s a game. Fucking unreal. Speaking of O’Keefe, this is relevant.

– Penn State will be playing against Penn this weekend who have moved 9 spots from #17 last week to #8 this week. They’ve only played 2 games this season but an 11-10 win over Virginia last Saturday was enough for them to make the jump to the top 10. Here’s what I said about that matchup before the game last week.

“Now here’s the thing. Virginia hasn’t been back long enough for me to see this game against Penn as a lock. That win over Loyola was a great statement win for this program. 1st game without Starsia in forever, they needed to pull that one out. 3-0 to start the year, do they keep it rolling and just dominate teams? I’m not sure. I think they get out of Philly with the win but I could see Penn making them work for a 1-goal win.”

So I was on the wrong side of that 1-goal game but it went exactly how we imagined it would. What I’m saying is that Virginia has looked good so far this year but they’re still trying to figure out who they are as a team. There are still too many new faces in the program to qualify them as being fully back. So do I think a win over a turnaround Virginia squad is worthy of moving up almost 10 full spots? Not necessarily. Ivy League teams always play a tough game. They’re always going to give you a full 60 minute battle so I don’t think Penn State runs away with this one on Saturday. But I think the Nittany Lions move to 5-0 in the battle of Pennsylvania schools.

– Some newcomers to the Top 20 this week are BU and Stony Brook. In case you missed it, Stony Brook laid a fucking SMACKDOWN on Brown last weekend. 25-17 and that score doesn’t even do it justice after the lead that Stony Brook jumped out to. And Boston University? Well they’re off to a wild 5-0 start. They opened up the season with a 2OT win over Providence, then last weekend they scored on this buzzer beater to take down Navy.

Who let the dogs out?

The 1st Tewaaraton Watch List was released this week. 50 players were named to the list which is obviously a shit ton to go through. So instead of bringing up all 50, let’s just narrow it down to our top 5 from the list.

Mac O’Keefe wasn’t named to the initial Tewaaraton Watch List so don’t yell at me. Also, yes, I am very much biased toward attackmen as a former attackmen myself. But as far as players who will have the most impact for their teams down the road when we get closer to Memorial Day Weekend, these are my guys who I would go to war with. Connizzarro currently has 21 points off of 11 goals and 10 assists in 4 games. I didn’t put Denver in my original Final Four but you can never count out a Bill Tierney coached team. I think this weekend’s matchup against the reigning champion North Carolina is going to be a statement game for Connizzarro and the Pios. Actually, the next two weeks coming up are going to be the biggest weeks for Denver as they have UNC tomorrow and Notre Dame next Sunday. After that, their schedule is pretty weak (no disrespect to Ohio State and Towson but still). If they come out of the next 2 games at 6-0 and Cannizzarro puts up another 4 points per game, then he’s a legit threat to win this thing. If he fails to show up on the big stage, well then better luck next year. But not really because he’s a senior.

Connor Fields. I know a lot of people might think this is just my Albany bias creeping in but Fields has 9 goals and 12 assists in 3 games so far. When you think of Albany lacrosse, you think creativity and you think deceptiveness because of the blueprint the Thompson brothers left behind. Well Connor Fields is picking up right where those guys left off. Here’s 2 goals, almost identical, of the kid just balling out there. The 1st is from the Danes’ win over Drexel on Saturday. The 2nd from their win over UMass on Wednesday.

At the very least, Fields is a 1st team selection for the All Slick Team at the end of the year. So shifty. So creative. Gets that Albany offense going every game. Kid can ball.

– Duke’s Justin Guterding has 25 points in 5 games with 13 goals and 12 assists. Obviously Duke sucks right now. They always suck in the beginning of the year. That’s just the Danowski way. You don’t win championships in March. They’ll find their stride later down the road and we’ll see them in the quarterfinals because that’s just what Duke does. I don’t see them in the Final Four but I do see Justin Guterding to remain a top 5 point scorer for the rest of the season.

– Matt Rambo has lost in the National Championship game the past 2 years. 36 points his freshman year. 59 points his sophomore year. 75 points his junior year. He has a chance to end his career with a ring and a Tewaaraton Award. He currently has 22 points with 11 goals and 11 assists and the Terps are off to a 4-0 start. If you can only watch one game this weekend, make it the Maryland vs Notre Dame game. This could very easily be a match up we see again at some point late in May. There’s definitely an added level of pressure that comes with being Matt Rambo. He came in as the #1 recruit in the 2017 class his freshman year. And twice now he’s come just a few goals away from being a national champion. This is his last ride to get it done and you know that the Terps go where Rambo goes. It’ll be nearly impossible to give the award to anybody else if the Terps come out on top this year. Lukewarm take, I know. But that’s just a fact.

Rambo vs Garnsey on Saturday. Philly grit vs New England flash. Two of my favorite players in college lacrosse trying to one-up each other all day. Maryland is the 1 goal favorite but the game it’s a home game for Notre Dame. Maryland is averaging 15.5 goals per game so far this season. Notre Dame is only giving up 7.5 while scoring 16. I think I have to take Notre Dame in this game tomorrow and then Maryland winning the rematch whenever they meet up again in the postseason.

Finally there’s Pat Spencer. Loyola didn’t get off to the hottest start this year by dropping back-to-back games to Virginia and Hopkins. Luckily they had lowly Lafayette to put an 18-5 dick kicking on. Spencer hasn’t been quite as active as he was at the end of last season but he’s still averaging 5 points per game this season. Water finds its level so expect him to get that up closer to 6 or 7 points as Loyola starts to roll.

Thanks a lot for stopping by, guys. I know that was a fuck ton of words for a Friday afternoon but hopefully you could pick and choose what you wanted to read/ignore. If you have any suggestions on how you’d rather see this post formatted for future weeks, just let me know. I’m usually open to constructive criticism as long as you’re not a cock sucker about it.