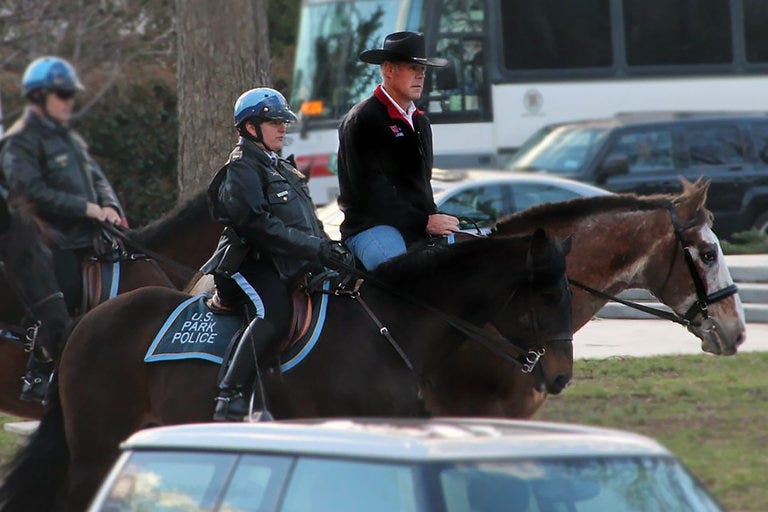 NYTimes- On his first day on the job, the new Interior Department secretary, Ryan Zinke, proved he knows how to make an entrance: arriving high in the saddle on Tonto, a brown Irish sport horse. Mounted police escorted him a few blocks through Washington.

Mr. Zinke, a fifth-generation Montanan who now oversee the country’s 500 million acres of public land, including 59 national parks, showed up to work to a grand reception.

Officers from various agencies under the Interior Department lined the steps to the administration building while a drummer from his home state’s Northern Cheyenne tribe played and chanted.

Mr. Zinke, 55, served nearly two dozen years with the Navy SEALs before entering politics in 2008 as a Republican.

At first, I was going to say “who does this guy think he is?” But then I read that he was a Navy SEAL for 24 years, and now this entire charade seems awesome. This guy can do whatever he wants. Mr. Zinke, you’d like to borrow a horse, shut down traffic, and ride through the streets of Washington DC to start your job? Uhm, yep, I’ll just call the stable boy but I think we can make that happen.

This is bad-ass-motherfucker. Showing up in a cowboy hat and jeans, on a horse, with a Native American drummer playing you in sets some kind of tone. Totally redefining the “drain the swamp” idea. The kind of guy you hope isn’t the dad of your next girlfriend because he’d break every bone in your hand when you met him. Ryan Zinke suffers no fools. He’s friends with the Cheyenne tribe, and you can bet he’ll decorate his office with the scalps of anyone who talks to him without an appointment.

Apparently he met the outgoing Interior Secretary on the steps. Can you imagine handing the reins to this guy (lol)? Guy probably took an Uber to his first day on the job and had to tell people who he was. Meanwhile, his successor is showing up like Khaleesi.

“It was quite a neat reception,” said Greg Julian, a spokesman at the Bureau of Safety and Environmental Enforcement.

“It was a neat reception,” said Greg Julian after meeting his new boss, a dark trail of urine pooling in his shoes.