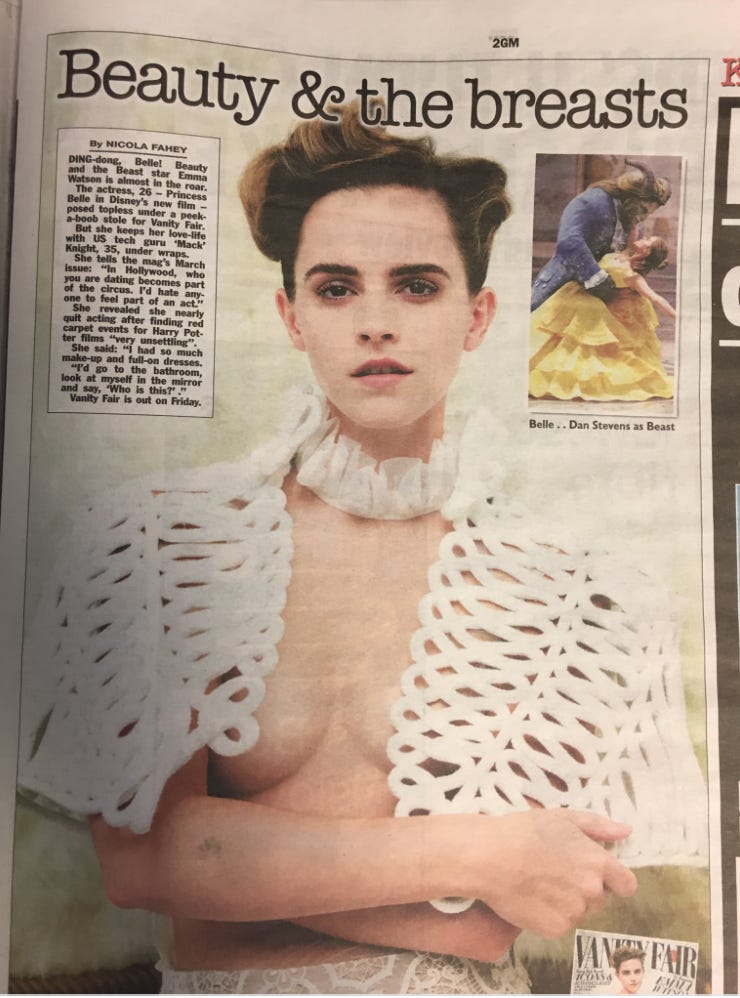 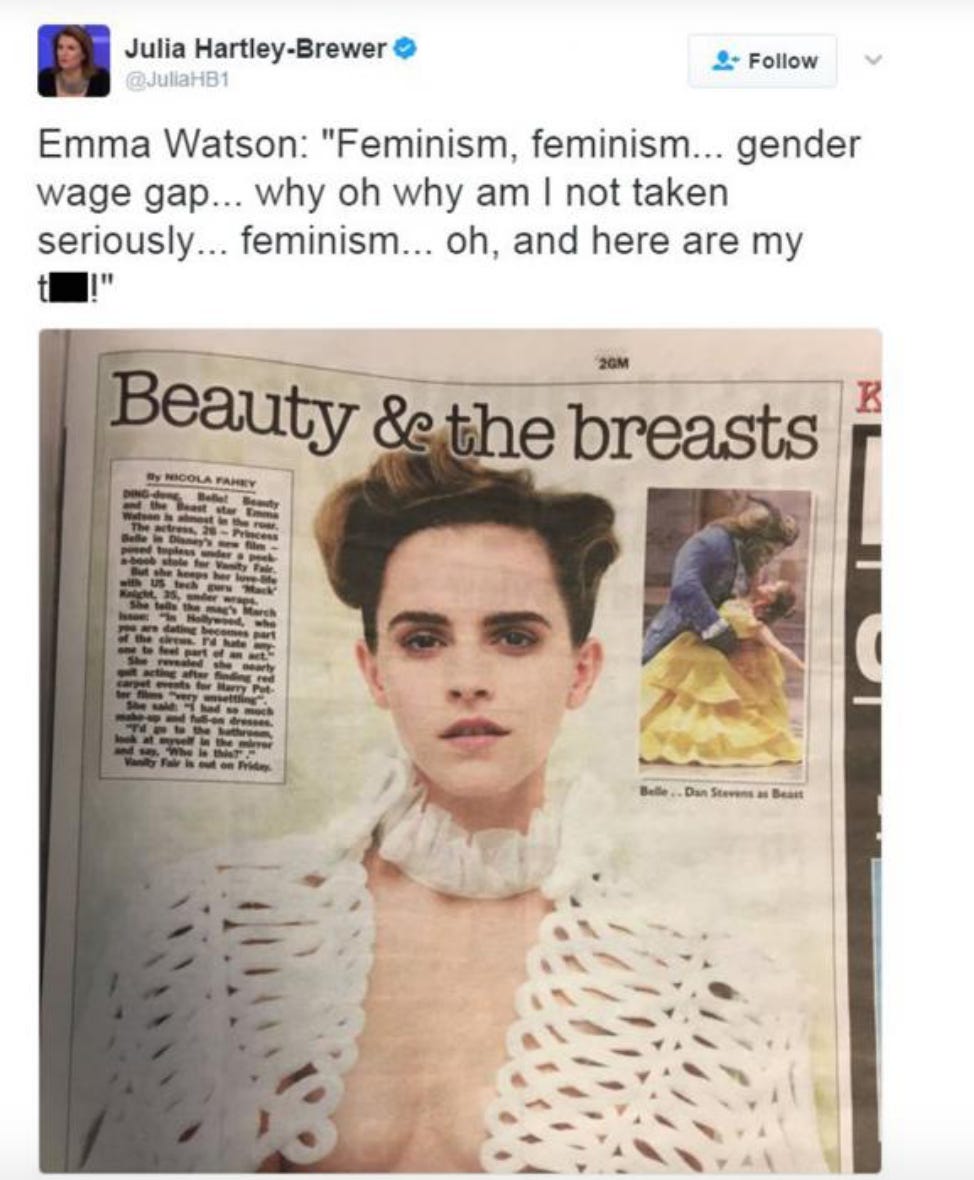 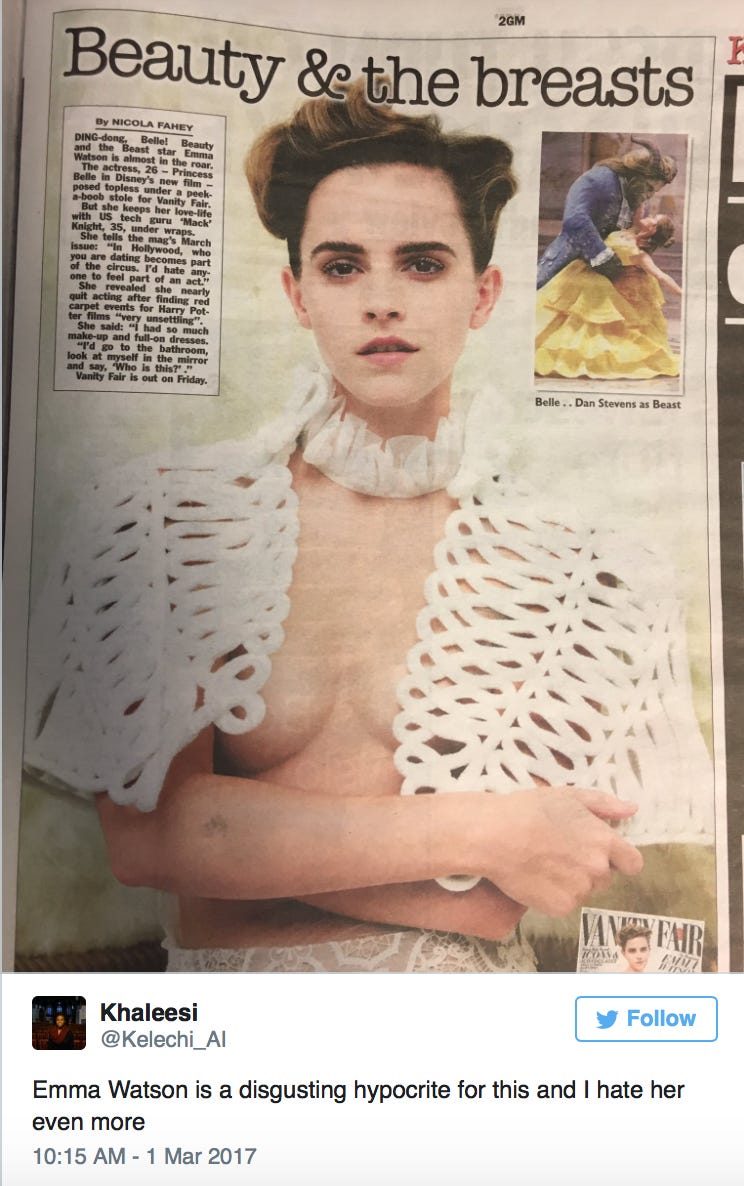 Standard- Emma Watson faced a backlash after she exposed her cleavage in a magazine shoot. Watson, 26, was accused of being a ‘bad feminist’ after she posed in an open crochet top for an interview with Vanity Fair. The actress – who is a UN ambassador – was called out by some for being “hypocritical” for identifying as a feminist, but choosing to strip off. Julia Hartley-Brewer tweeted: “Emma Watson: ‘Feminism, feminism… gender wage gap… why oh why am I not taken seriously… feminism… oh, and here are my t***!’” She accused Watson of using her breasts to “boost” her career and described the actressas “hypocritical and silly”.

Wait that’s it? That one picture is the thing feminists are made at? LOLOLOLOLOLOLOLOLOL. Are we sure? That can’t be right. She’s not even really topless. You can’t see anything. I was expecting her titties to be bouncing all over the place given the tone of those tweets. What a bunch of idiots feminists are. They’re calling out Emma Watson for her perceived hypocrisy when they’re the biggest hypocrites of all. Bar none. They like it when famous women like Emma Watson support them and help their cause and bring awareness to it but then the second Watson wants to show off her body, they freak out and abandon her. I thought feminists were all about body freedom? Oh it changes when the body freedom relates to the body of an extremely attractive woman? Got it. Therein lies the hypocrisy. Feminists can’t decide whether or not they want to allow the attractive members of their resistance to use their bodies freely in an effort to be more successful. It straight up befuddles them. I wanna go on record and say Emma Watson looks beautiful and I support her decision to show off her body.