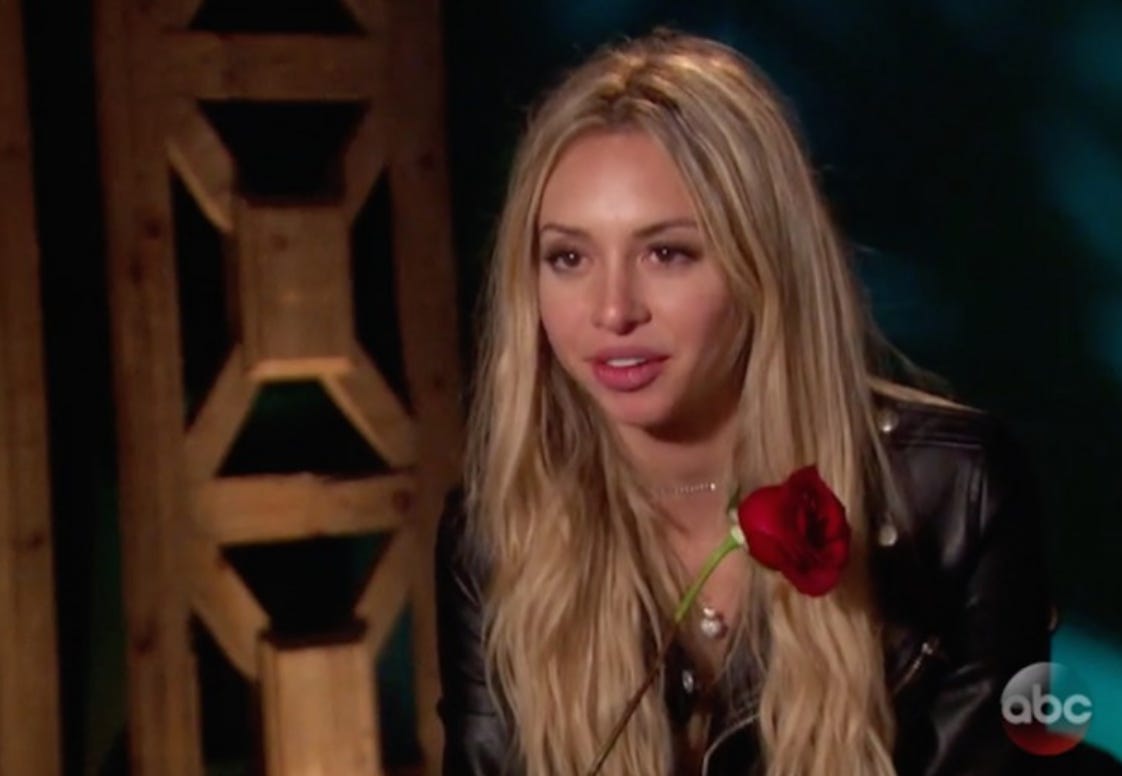 People- From topless photo shoots to whipped cream shenanigans, it’s safe to say The Bachelor‘s Corinne Olympios wasn’t shy in her pursuit of Nick Viall‘s rose week after week — but that doesn’t mean she isn’t ready to move on to bigger, better prospects. The 24-year-old owner of a multi-million dollar business revealed she would be open to being the next leading lady of The Bachelorette after Rachel Lindsay — who also vied for Viall’s heart this season — takes a turn handing out the roses. Though she hasn’t been asked yet, Olympios confirmed to Entertainment Tonight that she’s single and said, “Of course I would do it, it’s an amazing opportunity for anyone who gets asked.” She added, “Having a reality show has definitely been a very serious talk of the town, so we will see.”

Do I want Corinne to be the next next Bachelorette? Yes and the timing couldn’t have worked out more perfectly. Rachel is the next Bachelorette and that’s just fine and dandy. It’ll be interesting to see how the world reacts to the first black Bachelorette. More importantly though, Rachel as the next Bachelorette gives Corinne the opportunity to go on Bachelor In Paradise before becoming the next next Bachelorette. Because if Corinne isn’t on the next season of Bachelor In Paradise, I’m going to be furious. I’ll burn this whole place to the ground. No one has ever been so tailor-made for anything. Michael Jordan was born to play basketball, Abraham Lincoln was born to be president and Corinne was born to be on Bachelor In Paradise. Facts. It’s a place where the drunk and sexually-crazed go to live out their wildest dreams. Oh and not to mention Chad is committed to the upcoming season of BIP. Chad and Corinne hooking up on BIP is such a layup that every ABC producer should be fired if it doesn’t happen. Those two will have drunken sex and the world will fold onto itself. It’ll be amazing.

In terms of Corinne being the next next Bachelorette, she’d be amazing. Ratings through the damn roof. If we’ve learned anything from the past two seasons of Ben H and Nick V as the Bachelors it’s that nice and boring fucking sucks. JoJo was a good Bachelorette but that’s just because people liked her and she was charismatic enough. We need crazy assholes though. That’s what plays and that’s what Corinne is. She’d be a train wreck and nothing sells like a train wreck.  #Corinne4BacheloretteButOnlyAfterSheGoesOnBachelorInParadiseAndHooksUpWithChad