I know everybody’s starting to move on from the Oscars but I just can’t get enough of this story. I mean I work at Barstool Sports. I can understand and appreciate a production disaster and absolute chaos behind the scenes as well as anyone. Hearing about it happen not at the messy bar at Barstool HQ surrounded by 19 unpaid interns, but on the biggest stage in entertainment is a nice breath of fresh air.

Also seeing the faces of people having the greatest accomplishment of their lives ripped away from them and given to someone else is a beautiful thing.

“Have any of you here ever hosted the Oscars before? Except for the end, it was a lot of fun,” he joked.

“It went very well. We were chugging along, and then, all of a sudden out of nowhere, it turned into a Maury Povich paternity test shows. It was the weirdest TV finale since Lost. As I’m sure you’ve at least heard La La Land was simultaneously the biggest winner and loser last night. You know it’s a strange night when the word ‘envelope’ is trending on Twitter.”

“In case you missed it, Warren Beatty and Faye Dunaway—it was the 50th anniversary of Bonnie and Clyde, and they played Bonnie and Clyde—so the Academy asked them to present Best Picture, the biggest award of the night. It’s the last one they give out. So, they come out—with the envelope—and here’s where the story starts,” Kimmel said before showing the mix-up. “In retrospect, what Warren did was…He was confused, so he handed it to Faye and let her read the winner. In other words, Clyde threw Bonnie under the bus, which was a slick move.”

“So, Faye Dunaway announces La La Land as best picture, which made sense, it was the favorite to win. So the La La Land producers get up on stage, which made sense, they thought they had won. And a few of them, Jordan Horowitz, Marc Platt and Fred Burger, gave speeches. I’m now sitting in the audience watching the speeches. The plan is for me to end the show from the audience in a seat next to Matt Damon, who, I want to make no mistake about, whatever confusion there was about who won, Matt Damon lost. He was a loser. He’s a loser.”

“We’re sitting there and we notice some commotion going on. Matt says, ‘I think I heard the stage manager say they got the winner wrong.’ The stage manager is never on camera; it’s very unusual. But you figure, ‘Well, the host will go onstage and clear this up.’ And then I remember, ‘Oh, I’m the host.’ I go, ‘All right.’ I just walk up the stairs and as soon as I get up there, this happens,” Kimmel said before showing the clip of Horowitz correcting the error and giving the award to Moonlight. “It’s kind of scary, in a way. That was the producer of La La Land; he thought he won. He’s standing there holding an Oscar that they’re now going to take away from him. My first instinct was to tell him to run—just take that Oscar and get out! But he didn’t.”

“Now there’s mass confusion,” Kimmel said. “The audience is confused, the people standing around me are confused, I assume everyone at home is confused, and I’m probably supposed to do something, because no one’s doing anything. And then Warren Beatty steps up to explain.”

After reviewing Beatty’s explanation, Kimmel said, “Moonlight wins Best Picture, and now we have the producers of two movies onstage. Who the hell even knows who is who from which movie? I’m standing there like an idiot feeling bad for these guys, but also trying really hard not to laugh, to be honest. I see Denzel Washington in the front row trying to get my attention. He’s gesturing and he’s pointing. I don’t know what he’s [doing], but he yells, ‘Barry!’ I’m like, ‘What?’ He says, ‘Barry!’ Eventually I figure out that Barry Jenkins, the director of Moonlight, is standing behind me, and Denzel wants me to get him to the microphone to make a speech, which made sense.”

“Thank God Denzel was there to make sense!” he joked. “I’m listening to Denzel, as you should. I went and got Barry; he spoke, but not for very long. Then there was another quick speech, and then everyone just stood there, kind of shell-shocked. And I ended the show.”

“As I walked offstage, people started to speculate. People around me said, ‘Did you pull a prank of some kind?’ I was like, ‘Hey! I did not pull a prank.’ If I had pulled a prank in that situation, I wouldn’t have just had the wrong winner’s name in the envelope. When they opened it, there would have been a Bed Bath and Beyond coupon inside,” Kimmel joked. “It was not a prank.” 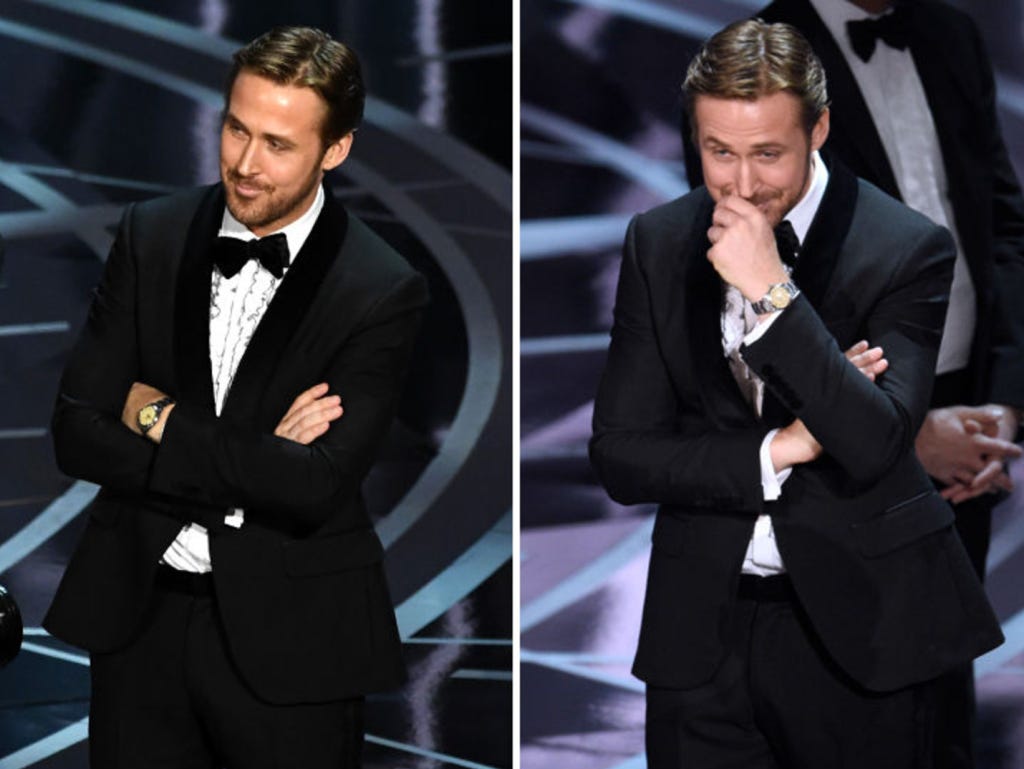