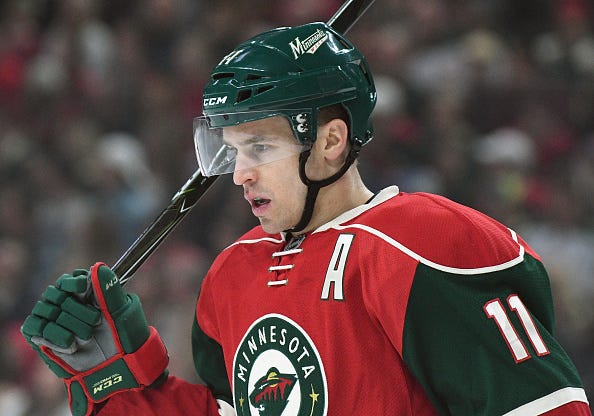 NHL – The Minnesota Wild announced today that forwards Jason Pominville and Zach Parise have been diagnosed with mumps.

Members of the organization that have symptoms are being tested immediately and placed in isolation for a five-day period. Team doctors recently provided players and staff an MMR vaccination and the organization will continue to work closely with the NHL, NHLPA and the Minnesota Department of Health to help prevent further infection.

I said on Saturday that mumps making a comeback is just what the NHL needed this season. Just a little side story for all the teams to rally around this year. Teams are currently looking to make that final push for the playoffs or that final push to become legitimate Stanley Cup contenders. You lose a few guys to the mumps in March? Well that’s what we in the biz like to refer to as “adversity to overcome” when you’re giving cookie cutter responses to reporters for the rest of the season. Parise and Pominville go down with the mumps? You bet your sweet ass Eric Staal gets to answer every single question with “well, ya know, we just have to stick to our game plan. We just have to keep battling and play our brand of hockey. Every game is important. We need those 2 points and the boys are just gonna rally around this”. It’s every player’s dream.

So now let’s play a game called which team is going to get taken down by the mumps next. It all started with the Vancouver Canucks. So with the Canucks and Wild being the first 2 teams to get the mumps, let’s go back to the last time these two teams crossed paths. Which would be their February 4th game which Minnesota won 6-3. Kind of a dick move of the Canucks to give the Wild the mumps as payback for winning. But the Canucks have built up that reputation of being a bunch of scumbags so that’s par for the course. Anyway, since February 4th the Canucks have played Nashville, Columbus, Boston, Buffalo, Pittsburgh, St. Louis, Calgary and Philly. That’s all before it came out that players on the team have been diagnosed with the mumps.

Since February 4th, the Wild have played Winnipeg, Chicago, Tampa Bay, Detroit, Anaheim, Dallas, Nashville, and the Kings. So as you can see, Nashville is getting double penetrated by the mumps this month. They’ve been exposed to it by the Canucks and they’ve possibly been exposed to it by the Wild. If I’m handicapping this race, I think the Predators have to be the clear favorite to come down with the mumps next. With possibly Chicago coming up next. Should be a helluva month coming up here. March Mumps Madness.