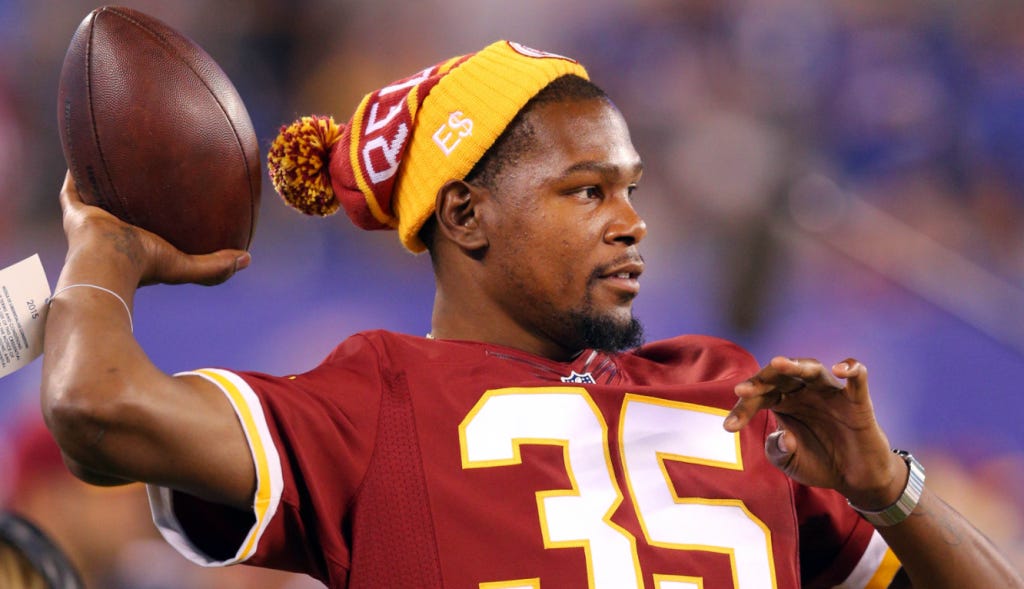 Washington Post - When Durant plays at Verizon Center on Tuesday night as a Golden State Warrior, with an enormous tattoo spelling “Maryland” still inked across his shoulders, it will evoke two of the forces that shaped his life and colored his choice: an abiding love and appreciation for where he grew up, and an ardent need to expand himself beyond it.

“I don’t want to open up anything in the past, but I really just didn’t want to play at home,” Durant said. “It was nothing about the fans. Being at home, I was so happy with that part of my life — playing at home, being in front of friends, hanging with friends and family every day. That was a part of my life that has come and gone.

“I was like, I’m trying to build a second part of my life as a man living in a different part of the country, just trying to do different things. I did everything I was supposed to do in the D.C.-Maryland-Virginia area, I felt. Now it’s time to do something new. I didn’t want to come back. That’s just my thought process behind it. It had nothing to do with basketball, the fans, the city.

“It was just like, ‘All right, that part of my life I’ve conquered already. What’s next?’”

Look, does anyone completely believe the explanation KD gave for not wanting to return to the Wizards? Absolutely not. If they weren’t one of the worst franchises in NBA history, I’m sure the narrative would have been a lot different. However, the reasoning he did give is solid. I recommend reading the entire Washington Post article, because it makes sense. He moved on past the stage of his life where he needed to play at home. He wants to live and grow elsewhere, and then be able to come back home. He didn’t want the old “hanger oners” to hit him up constantly for tickets or money. He obviously loves the area, the teams, and all of that.

Now back to my original point- obviously if the Wizards were a team with a rich history like the Lakers, he would have been much more interested. But after so many bad seasons and a bad front office, coming off one of their most disappointing seasons in year, the Wizards were the last team all of the free agents wanted to play for. They heard John Wall tirelessly talk about the empty arena, or the bandwagon Cavs fans.

The biggest problem I have with KD’s explanation is the “I did everything I was supposed to do in the D.C.-Maryland-Virginia area, I felt.” That’s obviously where he’s wrong. The Wizards, for the most part, are a basketball afterthought. They are the team where Gilbert brought a gun into the locker room, or where Jordan played out his last years. Durant would have changed the perception of the Wizards, and maybe paired up with Wall and Beal, brought glory back to DC sports.

I don’t think he’ll be booed tonight when he plays in DC for the first time as a member of the Warriors. Afterall, we are whipped as fans, and are already holding out hope for KD2DC2018.