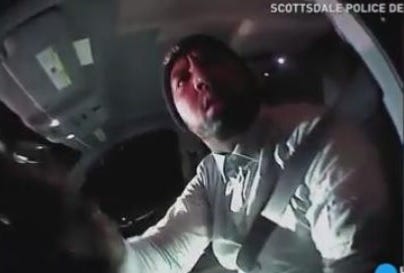 ESPN – Incarcerated wide receiver Michael Floyd will not be allowed to leave the state of Arizona when his home detention begins March 13. …

Floyd began serving a 120-day sentence on Feb. 16 after pleading guilty to one charge of second offense extreme DUI (BAC of .15-.19) for an arrest Dec. 12 in Scottsdale when he was found asleep behind the wheel of his Cadillac Escalade at a traffic light.

By law, Floyd had to spend the first 48 hours of his sentence in jail. For 22 days starting Feb. 16, he’s allowed to leave the Maricopa County jail under work release. … Floyd is being held in restrictive housing instead of with the general population, according to a Maricopa County Sheriff’s Office spokesman, because of his stature. He’s in a cell by himself but he’s not under the restrictions that typically accompany restrictive housing. …

Among the conditions of Floyd’s home detention, when he’s released in two weeks, Floyd will not be able to consume alcohol, nor use mouthwash or over-the-counter medication with alcohol in it. He’ll be wearing a device that can monitor alcohol in his system.

As bad a look as Michael Floyd passed out at an intersection with a distillery running through his veins, this is even worse. I mean, what kind of a dope accepts this deal?

As everybody in the prison business knows, there’s easy time and there’s hard time. Easy time is kicking around Maricopa County jail, with the run of the place and your own cell like you’re a white collar criminal sentenced to a federal tennis prison. Hard time is being sent home with a booze detector strapped to your ankle and severe stank breath.

What is even the point of being home if you can’t drink or use goddamned Listerine? How do you even benefit? Because you get to sit home and watch TV? You can do that in stir. Get laid? You’d get more conjugal visits at the jail then you’ll ever get when you’re home with two weeks worth of halitosis fermenting in your mouth. Plus he’s a celebrity, so he’ll probably get all the sweet, sweet booze he wants, like the mobsters in “Goodfellas.”

So Floyd is passing up a stress free, rapeless existence of three hots and a cot every day, just so he can be home. And he can’t even leave Arizona to meet with GMs and try to get a job when free agency starts March 9th. And when he does, his breath is going to smell like an open sewer. No thanks. And as far as him re-signing in New England, forget it. A guy who’s making decisions this bad isn’t worthy of calling himself a Patriot.