I think most of us had a similar reaction when we found out Bill Paxton died from complications of heart surgery yesterday. It was probably “Oh shit, President Whitmore died”. Then we remembered that Bill Pullman and Bill Paxton always got confused for each other, which led to a brief feeling of relief that President Whitmore was still alive and then an avalanche of sadness that Bill Paxton died. Just a likable guy that crushed it in a bunch of movies, most notably Twister.

Which is why seeing these storm chasers go nuts for him was so awesome. Sure it’s great to be remembered by the masses. But to have a much smaller group of people love the FUCK out of you and honor you with a touching tribute is even more awesome. Especially if they may be a little cuckoo in the head (in my mind, anyone that chases storms is loony toons but more power to them).

Plus we had this little nugget which meant it all had to be fate.

Oh man, Wakita AKA the setting of Twister and home of the infamous Twister museum?!? Goosebumps, folks. 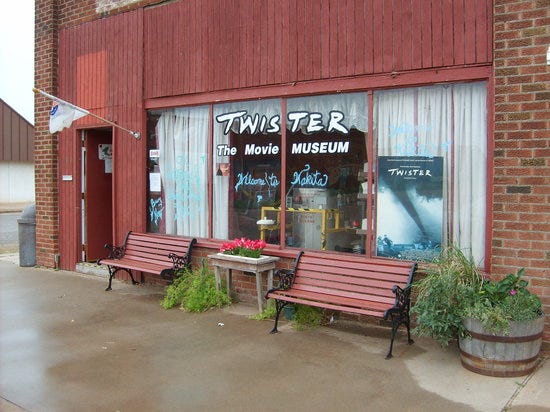 If this is the type of reaction Bill Paxton gets from weather freaks when he dies, I don’t think I’m ready to see Twitter when Sam Champion inevitably bites the dust (and not just for all the Piazza tweets).

So RIP in Peace, Bill. I hope that when I die, I am remembered with the same amount of love by a fiercely loyal group of people that you were. Sure I may have inspired a future smut blogger or two instead of a gaggle of storm chasers and I imagine the venn diagram for those two sets of people don’t overlap much. But both are definitely looked upon as two of the more touched segments of people in America.

P.S. Bill Paxton being the only person to ever be killed by a Terminator, Alien, and Predator is a record as unbreakable as Joe DiMaggio’s 56-game hitting streak (unless some sequels are made and the directors want to be assholes.)

P.P.S. I would be remiss if I didn’t include Paxton’s role as a Hall of Fame sleazeball in True Lies.