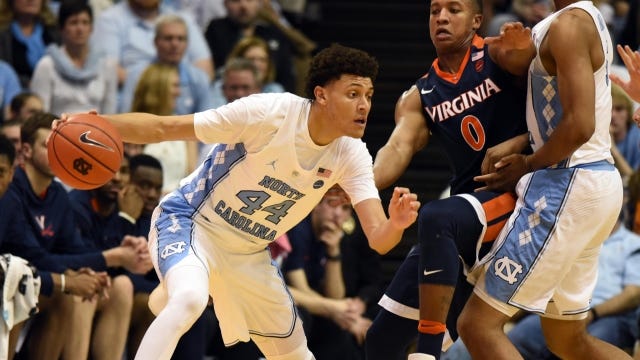 Two big games tonight so we won’t kill a lot of time getting into it. You got two teams who desperately need a win (Baylor and Virginia), one team trying to hold serve as a No. 1 seed (UNC) and another team battling for seeding position (WVU). You’re going to need multiple TV’s tonight with both these games at seven.

Take everything in this blog with a grain of salt because at the time I’m writing this it’s still unknown if Lecomte is going to play or not. He left the Iowa State game on Saturday with an ankle injury, something that he’s battled for the last couple of weeks. While Baylor is a tough matchup because they can throw out Motley and Lual-Acuil, Lecomte is the playmayker of the team. He’s averaging over 12 points a game and shooting 41% from three, while only committing 2.1 TO/game. Not having him against West Virginia’s press is a likely disaster.

These two teams, while both strong defensively, play on the opposite sides of the spectrum. To make it look pretty, here’s a graphic breaking it all down 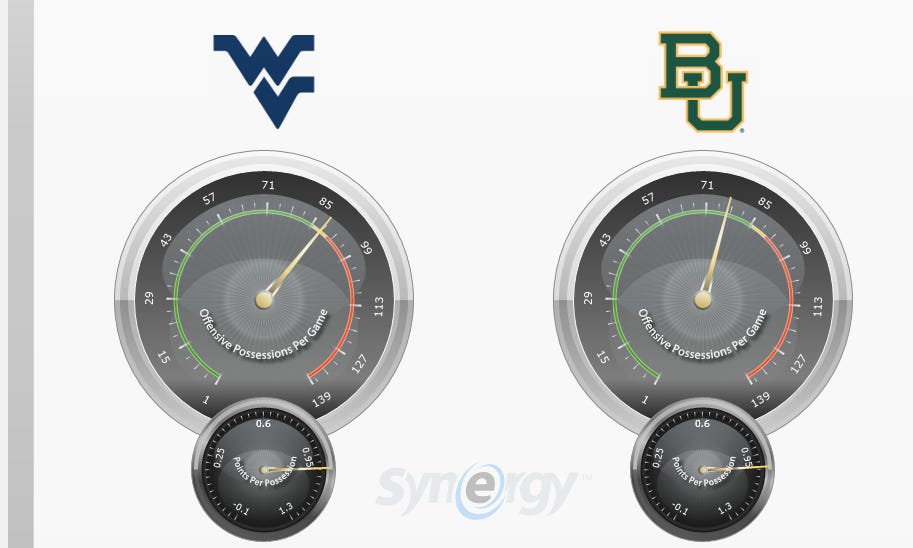 You can see West Virginia averages close to 20 possessions per game more than Baylor. They want to get up and down, they want to force turnovers and quickly score. That’s who they are. Baylor on the other hand wants to slow you down and play through Motley. They want to attack the paint and use their size to score over you. Now, while you can make an argument either way (I lean for teams that play more like WVU) the thing to notice is the points per possession. It’s nearly identical. That’s where WVU can get you, because they are wildly efficient on the offensive side of the ball for playing close to 90 possessions a game. Baylor has to slow West Virginia down here, which likely brings down those points per possession. Slowing WVU down means you’re not turning the ball over and letting them get a couple quick possessions. You want this game to be closer to 80 possessions than 90.

It’s cliche, but these are two of the three most important stat battles to win tonight (turnovers being the other). It’s pretty simple here. Take a look at the average numbers of threes made and offensive rebounds per 155 possessions for each team: 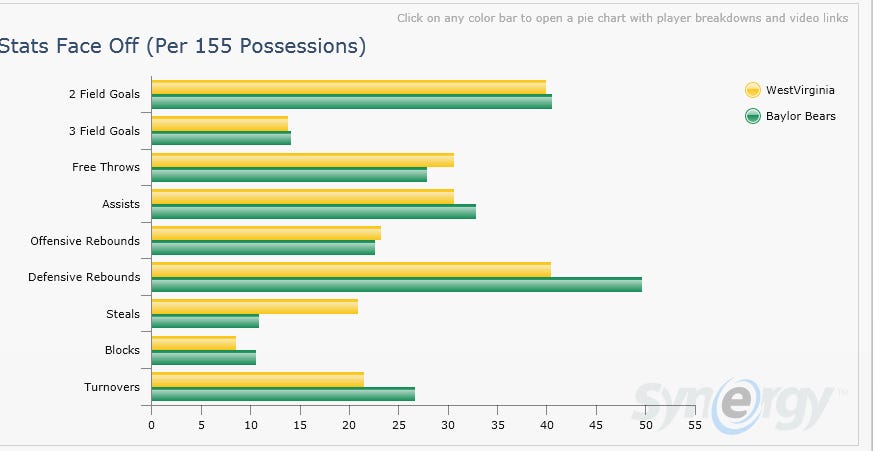 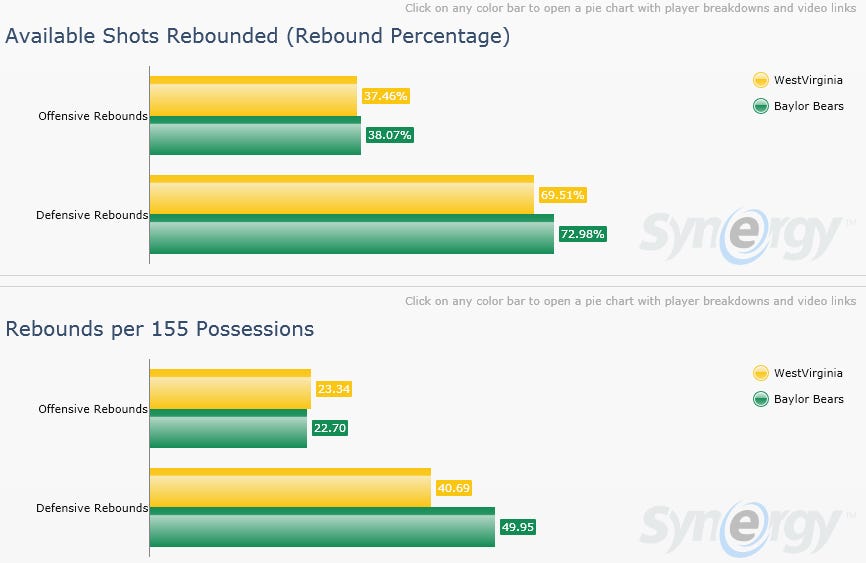 Pick: Like I mentioned earlier it all depends on if Lecomte plays or not. If Baylor has him, I think they win at home. West Virginia has struggled on the road and is escaping TCU while Baylor is coming off that loss to Iowa State. This is still a good Baylor team, even if they aren’t going to be a No. 1 or possibly No. 2 seed. Without Lecomte though, West Virginia will win this game. Monitor that all day if you’re looking to put money on this. In the first game Baylor had 29 turnovers, that’s just way too high of a number, when when you’re playing WVU. Possessions in that game? 90 for West Virginia. It’s simple, keep the possessions down to 80 and Baylor is there.

1) Can Virginia score the ball?

It’s pretty simple here. The Cavaliers are 4-6 in the last 10 games and the offense hasn’t been pretty. Their high is 78 (in a double-overtime loss to Virginia Tech) and they’ve hit 70 points just five times. The other five games? 59, 62, 55, 55, 41 and 48. You can’t constantly win games playing that slow because it just leaves too much room for error, especially when you’re playing a team like UNC. That 41 point game? That happened at Chapel Hill a couple weeks ago. The problem is UNC is so good defensively that the biggest advantage for Virginia is when they run in transition – something they don’t love to do. This is who has an advantage when Virginia has the ball: 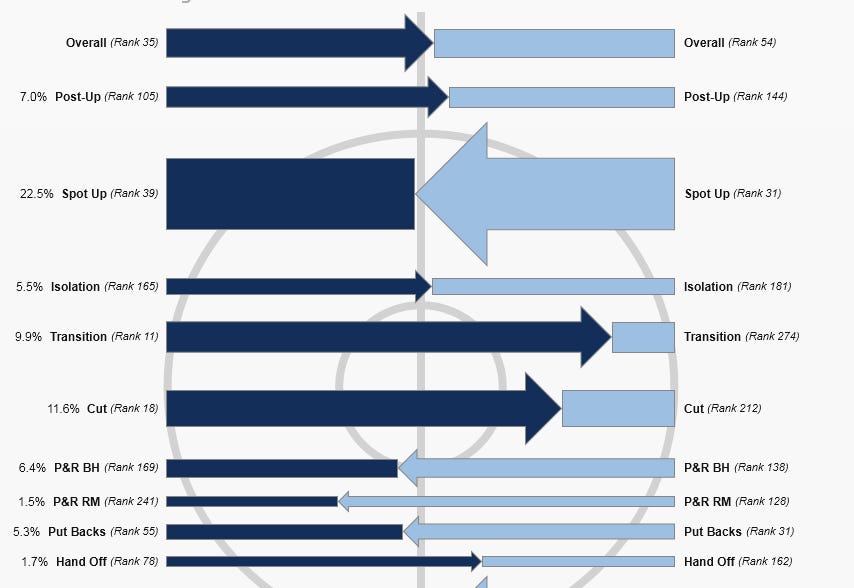 Sure you can run some cuts in the halfcourt set and hope you catch UNC out of position. But, look at the transition advantage. You rank 11th in the country yet you don’t take advantage of it in terms of how much you push tempo. Let this team, with a senior point guard and a dude like Kyle Guy on the wing get out and score. Let me save you the time – yes, I know Tony Bennett is smarter than me and a ridiculous coach, but at some point you have to adjust to your team. This team is simply better when they run. Get that number closer to 20% instead of 9.9% and see the difference.

2) Who controls the tempo?

Talked about it in the Baylor/West Virginia game and it’s even more important here. The reason being UNC can play at a slower pace – we’ve seen them win games with not a ton of possessions i.e. the Virginia game. Can Virginia win if the game is played at UNC’s pace? I don’t think so. 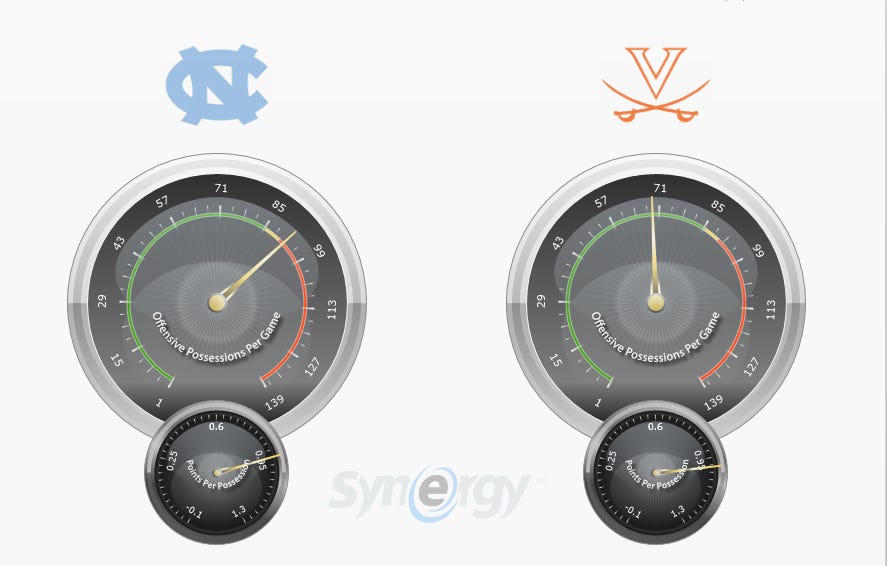 If you thought Baylor needs to hold the game closer to 80 possessions, look at the disparity here. UNC averages 90 possessions a game (give or take one) while Virginia is below 70. Thankfully for Virginia they continue to be one of the most efficient teams in the country, because otherwise we’d see more games in the 40s like that Miami disaster. Now, I go back to the game earlier this season where Virginia held UNC to 73 possessions, but the Tar Heels doubled Virginia up in transition. UNC pushed the ball in transition to a shot attempt 23 times, Virginia just 10. Virginia needs to not only limit UNC’s total possessions (73 is a good number), they need to play pretty equal in transition shot attempts.

3) Can Virginia take away Justin Jackson?

Justin Jackson has become a star this year and is one of the few favorites for ACC Player of the Year. In the first game this season he had 20 points and a 3.0 assist/turnover ratio. That’s pretty unbelievable when you consider how inconsistent he was the first two years. More importantly Jackson was efficient in that first game scoring 20 points on just 17 possessions. What I like what UNC did with Jackson was not use him the same way against Virginia’s Pack Line defense. Against the Pack Line you have to be careful with ball screens because of the way they’ll trap and rotate. You need to attack pretty similar to the way Duke did, by not dribbling, getting the ball to the roll and attacking 4v3. Now, where Jackson can hurt you is coming off a screen that’s off the ball. Take a look here at what he did in the first game. His length and ability to shoot that floater gives him the advantage before the defense can react.

The other thing is UNC doesn’t need to run a ton of pick-and-roll like you see across the country. The Tar Heels will spread you out, pass, back cut and screen away from the ball to get the movement. They also look for some hi-lo action and then take advantage that way. Again, look at Jackson in the first game here as they avoid the ball screen for the possession. More importantly watch all the action away from the ball, which causes Virginia to continue to look around there.

Pick: I hate taking road teams, but I think UNC is the best team in the country. Getting them at 3 doesn’t feel right, but I’ll take my chances on them here. I think the growth of Jackson this year and the interior play (something that kills the Pack Line) is too much for UNC. The other reason I’m taking them? Their ability to play in any game while Virginia has to dictate tempo.