“I don’t think the male students are hurt by it. In fact, they’re going around bragging about it as I understand it. I don’t see a lot of damage done.” – Donald J. Trump, 2012

This is what leadership is all about.

Throughout human history, up until the last 200 years or so, in order to lead a people you had to be able to ride a horse and win victories in battle. In the last two centuries, it’s all about being in touch with your people and knowing exactly what to say at exactly the right time. Whether you’re trying to hold a divided nation together, calm them on the eve of war, or inspire them to defeat Communism. And here’s a pre-presidential Trump, proving he has his thumb on the pulse of America in the 21st century. The Donald, just nailing the great issue of our time like the true man of the people he is.

What’s not exactly clear is which teacher in particular he’s being asked about. But going back into the 2012 Sex Scandal Teacher archives, it’s likely he and the reporter were talking about SST legend Julie Warning, since she made the cover of the NY Post: 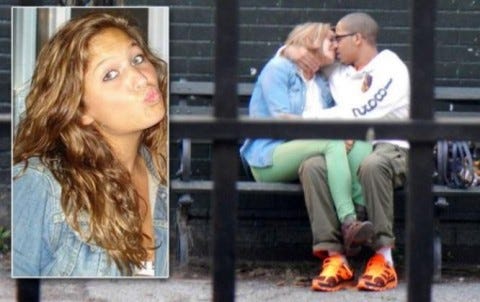 I named her manager on my 2012 Starting Lineup, and here’s what I wrote at the time:

Warning has not only the best name any pedophile has had since Chester the Molester comics, she made the front page of the NY Post making out with a student on a park bench. Apparently the guy (he was 18, I can’t call him a “kid”) made a bet with his classmates he could bed the teacher and won it in spectacular fashion. She’s the one I want as the face of my franchise. She was also busted on May 31st, which I will declare to be Sex Scandal Teacher Appreciation Day when I’m ruler of these lands in a few years.

Tragically, that was four years ago, and I’m only slightly closer to world domination than I was then. But we did manage the next best thing: A President of these United States who appreciates a depraved, sex crazed little bottle rocket like this as much as the rest of us.