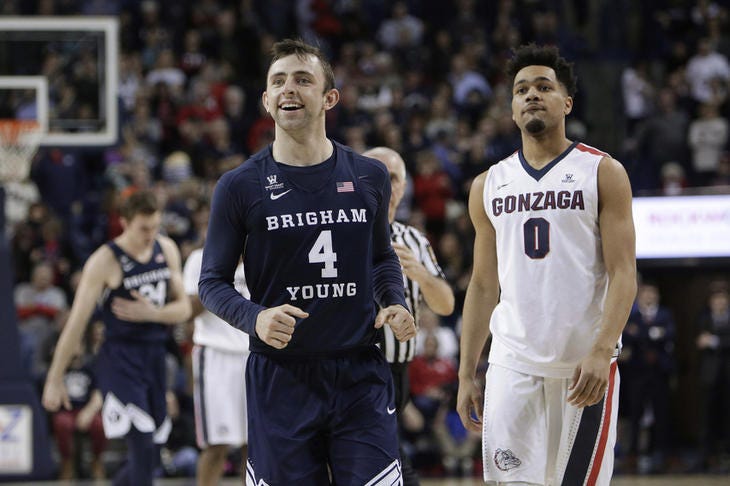 Alright, so a lot happened yesterday and I’ll try to sum it up as best as possible and as short as possible. Most notably UCLA got the home win over Arizona, Kentucky came back against Florida and Gonzaga finally lost meaning everyone is ready to fully hate them.

– Let’s start there with Gonzaga. First off, just stop with the notion that they lost because they haven’t been tested recently. The narratives that go with each program is always hilarious and this is one of the main ones with Gonzaga. They missed free throws and turned the ball over. When Wisconsin loses a game because of poor free throw shooting it’s never ‘they weren’t challenged.’ That’s it. It’s a game. Shit happens. It’s also really tough to go undefeated and it’s not like BYU is a garbage team.

– Gonzaga should still be a No. 1 seed. The fact that people think they should be dropped down to a No. 2 or 3 seed because of that loss doesn’t make sense. They are 9-0 against KenPom top-100 games and 7-0 in top-50 games (location of game factored in here). They have neutral court wins over Arizona, Florida and Iowa State.

– Kentucky is now a win away from clinching an SEC title and likely holding on to a No. 3 seed barring an epic collapse. During the game against Florida though, they showed why they can and can’t make a Final Four. That’s Malik Monk. He has the possibility to go for 50 in a game but Kentucky can also be predictable on offense when that happens.

– The key for Kentucky going forward though is the health of De’Aaron Fox. You could see the struggles on offense without him in, especially early. For a team that needs to run, having the quickest point guard in America healthy is pretty important. On top of that he’s become their closer in tight games. They like to use him in pick-and-rolls late in games like Georgia and let him take over going to the rim with Bam rolling and Monk in the corner to shoot.

– Get to know Florida’s Kevaughn Allen, the sophomore went for 24 yesterday and 26 against South Carolina in the game prior. This Florida team can make a run in the NCAA Tournament and he’s a guy who can go get his own.

– No one wants to win the B1G and the conference continues to be trash. Purdue had a chance to seal the B1G title and lost to Michigan. Maryland lost to Iowa. Northwestern blew a game against Indiana and is inching closer and closer to the bubble. That conference is a disaster.

– Arizona will likely still share the Pac-12 title even with the loss to UCLA last night. A win over Arizona State and they’ll at least split with Oregon. That should lock them into a No. 2 seed.

– The one wrinkle I absolutely fell in love with about UCLA last night? Going 2-3 zone instead of staying man down the stretch. Remember the game in Los Angeles? They just isolated Alford and let Arizona’s wings go to work. That’s the mismatch in this game and makes Arizona not an ideal matchup for UCLA.

– However, the 2-3 zone forced Arizona to go away from that and more importantly it exposed Arizona a little bit. They had no idea how to attack this zone and took them out of rhythm for the last 8 minutes or so in the game. On top of that the final possession where Arizona needed a three was brutal. You have to get the ball to Lauri in that situation instead of Kadeem Allen.

– Baylor is in an absolute freefall. Instead of being in the race for a No. 1 seed, Baylor very well may fall to a 3/4 spot. They’ve lost three of the last four and still have to host West Virginia next. The Bears need to get on the right side here soon and winning against West Virginia absolutely cures that.

– I’m not reading much into that Duke loss without Allen, but it’s worth noting how they looked the last two games. Frank Jackson had a nice game, but other than that it was ugly. This is another team who was making a race for the No. 2 seed, but it’s hard to picture them getting to that line now. That is going to be a No. 4 seed that a No. 1 team isn’t going to want to see.