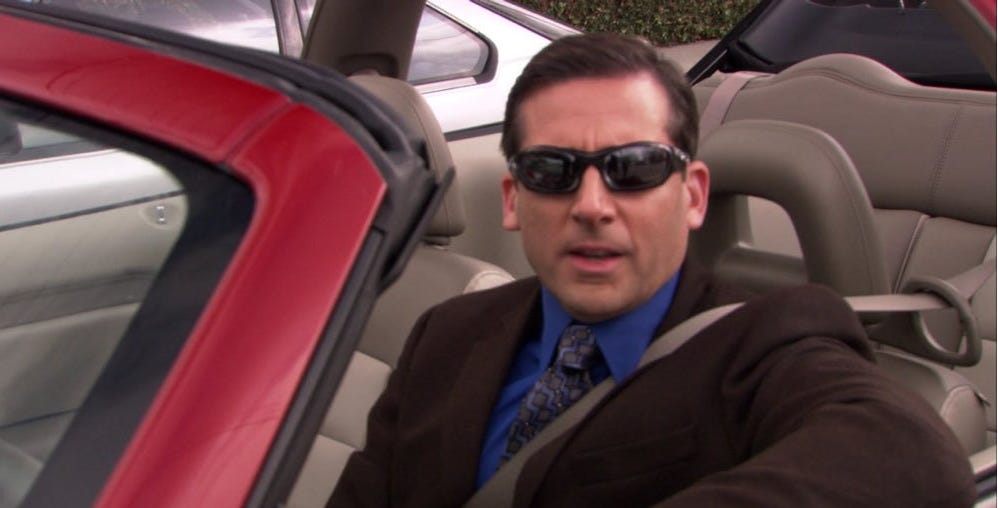 The 2017 Phillies season is finally here which means it’s time to revisit that quote Pat Gillick made back in 2014.

I sat down with Pat Gillick.Very honest,says Phils are rebuilding. Contend again? "I think somewhere around 2017,2018"http://t.co/8gcckKQrt0

They certainly looked like contenders yesterday after toppling the DII Tampa Spartans 6-0 in a 7 inning exhibition game. People forget they lost this game 2 years ago and then proceeded to win just 63 games that season.

If you are reading this have been following the Phillies the last few years, truth be told, they have not been very good. Now unless you are a Gillick truther like me, 2017 will more than likely be another one of those years. Will they be frustrating? God, yes. Will Pete Mackanin burn out the bullpen again in the second half? Probably. Will Caesar Hernandez remember not to slide past the bag when stealing second? Let’s hope so. I mean he did add 15lbs of muscle this offseason so maybe that extra body weight will increase his drag.

My main goal this blogging season is to make the Phillies watchable again. The roster isn’t the sexiest thing you will see on paper but if you are anything like me, you would walk through hell in a gasoline suit to watch Phillies baseball. Unfortunately for the masses of sports fans and Philly residents, there are much better things to do than watching a game for 3 hours, followed by reading a 5,000 word essay on it. Their play on the field just isn’t quite there yet, so thank God for John Kruk, the best offseason addition by far. 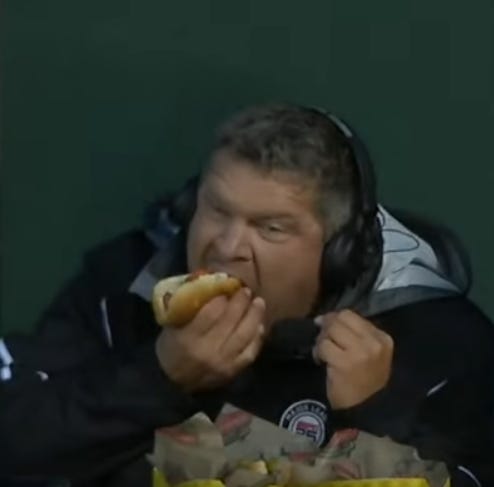 In December we learned the Kruker will join the booth alongside MonoTom McCarthy, Ben Davis and Gregg Murphy. When the news broke out that Matt Stairs was leaving the booth to become the hitting coach, I was praying that the Phillies find a way to get Larry Anderson and his audible chocolate off the radio airwaves and into the TV booth. I couldn’t ask for a better alternative with Kruk. It sounds like he will call about 90 games this season and split the rest of of the time with Ben Davis, who kind of grew on me last year. I can’t find his exact schedule yet, but ill be sure to get that out to you once it’s released. So prepare yourselves for some delicious unfiltered takes by Kruk like this beauty on why he left ESPN.

“If I say this I’m going to get in trouble, but I’ll say it anyway, I’m not big on meetings. We had a lot of them up there at ESPN. A whole bunch. Incessant phone calls. I didn’t answer most. Pretty rude when somebody’s hitting to answer your phone when you’re playing golf.”

So let’s dive into a brief season preview, a little offseason recap and we’ll start with my favorite projection of the year brought you by our good friends at Fangraphs and Baseball Prospectus.

It’s been a long time coming since the Phillies were the best at something so we’ll take anything we can get at this point. Coming off a 71-win season where the offense finished dead last in the MLB in runs and OPS while the bullpen imploded in the 2nd-half with a league worst ERA of 5.84, there is really only one place to go but up at this point. One thing is clear and it’s honestly hard to disagree, but major kudos to Andy MacPhail, Matt Klentak and the rest of the front office on an absolutely perfect offseason.

The additions via trade for Howie Kendrick (Sweeney and Ruf) Clay Bucholtz (Tobias), and Pat Neshek (Bag of Balls) to go along with their free agent signings of Jeremy Hellickson (QO) Michael Saunders (1yr9m) and Joaquin Benoit (1yr7.5m) will all be under contract through the 2017 season with the goal to move them at the deadline to a contender.

Kendrick and Saunders improve a corner outfield that was historically bad in 2016. Benoit and Neshek although up there in years, will be the safety nets the bullpen needs. There were a lot of mixed feelings on the Hellickson signing, but I was a fan. He will go out there and give us 28 starts and 12-13 wins with a sub-4 ERA. What’s 17 million anyway to an organization worth 1.2 billion. Get real people. As for Bucholtz I don’t really know what to make of him yet. He’s such a wild card, man. He’s always hurt and seems like such a headcase on the mound all the time. Getting out of Boston and coming to a no pressure zone like Philly seems like it was the best thing for him. I’ll give him the time of day until I hear the words ‘shoulder fatigue’ show up next to his name.

Now the current core of this still team is still very young and very raw. But, in those 6 additions we have 79 career playoff game appearances and 1 World Series ring. You know what, I’ll even add World Series Champ Chris Coglan to that list, who recently signed a minor league deal with an invite to spring training. He’ll more than likely make the team barring unforeseen circumstances. So that’s 94 career playoff appearances added this offseason and 2 World Series rings. So a for a team contiuing on that long lonely road of rebuilding, these are the types of veterans I want to see on a team with a solid young core.

C: Cameron Rupp. Rupp will be the guy for the forseeable future and Andrew Knapp will be his backup. Rupp calls a decent game, is a very passionate clubhouse guy and the ball fly’s off his bat. But his defensive metrics were some of the worst among qualified catchers with a 4.76 Catchers ERA and a 27% CS%. Plus, he really shit the bed in the 2nd half hitting just .211. Jorge Alfaro will see his name called sooner than expected you can bet on that.

1B: Tommy Joseph. In a platoon with Ryan Howard last year, Joseph hit 21 HR in just 347 AB. His plate discipline is atrocious walking just 22 times in 2016. His approach vs. RHP will need to improve significantly and when it does, I think we got our next 40 HR guy. BP projected him with to hit 31 this season. Nice sleeper for you fantasy guys out there.

2B: Caesar Hernandez: I already bashed his base running abilities and hopefully we have seen the last of that monster. This dude can just flat out play. We can talk about his baseball IQ all we want, but this slash line over 155 games .294/.371/.393 does the talking for him. Hernandez will be our leadoff hitter.

SS: Freddy Galvis. Freddy is a great SS, we have known this for a while. Fact of the matter is, Freddy sucks everywhere else. He has 5 years of big league experience and still can’t figure that he needs to get on base. I don’t care about the 20 HR, his league worst .673 OPS makes me cringe everytime I look at it. Plus, the 7-hole hitter should not be striking out 135+ times a season. Once JP fine tunes his skills a little more, he will be here soon people, don’t you worry.

3B: Maikel Franco. His 25 HR and 88 RBI doesn’t really reflect a sophomore slump, but if you watched him closely last year you know those numbers should have been better. His plate discipline basically disappeared in the second half. I mean hitting in front of Ryan Howard doesn’t necessarily help, but he will have all the protection he needs with Odubel, Howie and Joseph.

OF: Odubel Herrera, Kendrick and Saunders. We know what we have in Odubel. An All-Star caliber player with sneaky power who covers a lot of ground in center. We saw less of his brilliant plate discipline in the second half, but he will lock down the 3-spot and even signed a nice team friendly extension through 2023. Phillies yet again prove they are the best Rule-5 drafters in baseball history.

The corner outfield position posted a .675 OPS last season. Kendrick and Saunders will be a lot better than that until they are traded in July. Then we will be gifted with the one man electric factory that is Roman Quinn.

We already talked about Hellickson and Bucholtz. Let’s remove Jared Eickhoff from the conversation too because he is pretty much Hellickson 2.0. That leaves us with Aaron Nola and Vincent Velasquez. Myself and everyone else who follows this team have no idea what’s up Aaron Nola’s elbow until we seem him pitch a few innings. He say’s he 100% so take that for what it’s worth.

Vinny V threw the most innings in his career with 131 last season. He really hit a wall there after the first half where his ERA ballooned to 5.33. It’s obvious he over pitches in his starts, but my God is he exciting to watch. He had a brief stint on the DL last year with bicep soreness, so let’s hope for none of that. Zach Efflin, Jake Thompson, Adam Morgan, Alec Asher, Ben Lively and I guess Mark Appel are some of the other names you will see this floating around year.

Between us, I hate how right handed heavy this rotation is. I also hate the fact that outside of Vinny, all of our guys have literally the same exact scouting report 88-93 with a sweeping Curve and a average Change. I’m generally curious how a team like the Cubs will feast off that in a 4-game series.

Look out for the bullpen folks. Like last year, they might seriously surprise us again this year. Joely Rodriguez throwing 98 mph sinking gas from the left side. Edrubay Ramos is another power right handed arm who can touch 96 with a wipe out slider. And Jeanmar, well he certainly sucked at the end of last season, but the closer role is his to lose. He did have 37 saves last year, but an 8+ ERA in September is hard to forget. Expect another brilliant year from Hector Neris, granted if he remembers he has another pitch besides his splitter.

To my readers, thank you again for the support and a special thanks to Smitty for allowing me to clog up the main page again this season. Going to be a fun year. Also, follow me on twitter. Hard to take a guy seriously who has fewer followers than a Robert Person’s parody account.