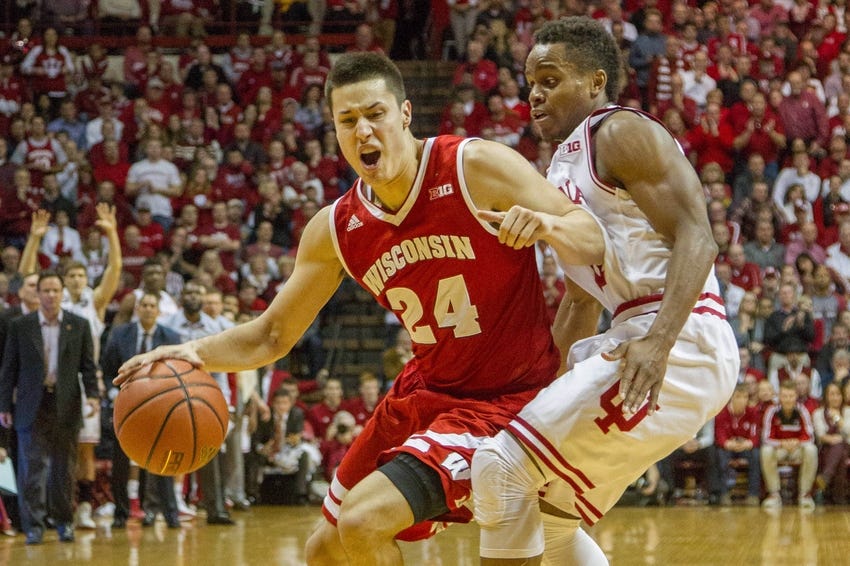 It’s no surprise this is a question being asked right now. The Badgers are 22-6, 11-4 in the B1G and just dropped 3 of their last 4. Sure, the record doesn’t completely awful, but this is a team that many had as a Final Four team in the preseason and with the B1G being way down this year, they should be running away with the conference. The loss to Ohio State yesterday all but sealed the B1G regular season title for Purdue now.

I mean, just think back to a couple weeks ago when people were up in arms that Wisconsin was left out of the top-16 during the bracket reveal. I can’t believe I’m saying this – but it looks like the committee got it right back then. So what’s going on with this team? There are a few things that you can directly look at and say this is part of the problem. Can it be fixed before the NCAA Tournament? Absolutely, some of these things are minor tweaks.

The biggest problem, which can’t be fixed, is no one besides Ethan Happ took the leap that everyone thought they would this season. After struggling last year in the regular season, the coaching change, the Badgers finally clicked in March and made the run to the Sweet 16. They did that as a No.7 seed. Now, because of that run and the fact they returned practically everyone, the natural assumption was there would be improvement across the board making this team one of the best in the country. Nigel Hayes and Vitto Brown never made that jump. Bronson Koenig has been hurt so it’s unfair to say he never made that leap. Zak Showalter is who he is and that’s a great roleplayer and someone who isn’t going to win you a game by scoring 20, but always shows up. Ethan Happ is a potential All-American.

To me though it falls a lot on the shoulders of Nigel Hayes and in part the coaching staff for that matter. The fact is, Hayes isn’t the best player on this team. He’s not and shouldn’t be used as one of the top two options on the offensive side of the ball. The problem? It’s hard to see Hayes buying into that theory. He’s still used as a prominent feature in the offense and that’s part of the reason for the struggles. Hayes doesn’t have an identity on the offensive side of the ball. He’s trying to show NBA scouts he’s extended his range, while also trying to help Wisconsin win games and that’s simply a bad formula.

Take a look at his play usage graph for the season here. 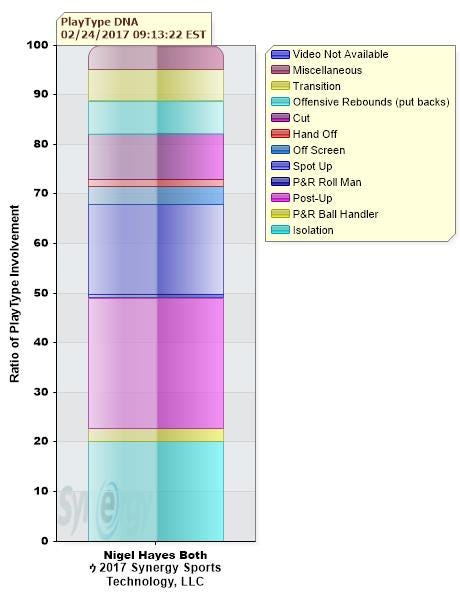 A couple things that stick out for me – and I’m about to speak out of both sides of my mouth here – is how much he’s in an ISO set. To me it all depends where the ISO set takes place. When Wisconsin uses him as the four and he can get a mismatch then I agree, putting him in an ISO, preferably in the high post is effective. But, too many times he’s catching the ball on the wing and trying to ISO that way, leading to a forced shot or a long jumper. His game shouldn’t be predicated on 15-footers, he needs to be a guy that can get to the rim and draw fouls or spot up from 3 and take advantage of kick outs (more on that later). Look here against Maryland. Hayes has a mismatch and catches the ball in a decent spot. However, the offense gets clogged as Koenig flashes to the post (doesn’t make sense against Huerter) while Happ is out on the wing (completely irrelevant when he can’t shoot.) Right away you’re taking away two scoring options. Now Hayes takes a one-dribble pull up from 17 feet, which is the worst shot in the game. It’s these plays that he has to get rid of.

On the flip side, here’s what he needs to do. In this play against Northwestern, he’s patient. He catches the ball in a great spot where he can operate starting with his back to the basket, something he excels at. He also reads the defense, he notices he’s given baseline so he spins that way and now is in a spot to where he’s either finishing or getting fouled. He happens to get both here. If I’m Wisconsin’s Greg Gard I’m putting in a rule that Hayes only has so many dribbles and then has to pass it. When he’s just standing there trying to force to create, the offense goes to hell.

The second part to the offense here is something that can be fixed but likely won’t be. Talking to someone familiar with the program he described the current team as ‘the half court offense is just beyond bad right now.’ Not really hard-hitting news, but what can be fixed about it? Playing at a faster tempo. The Badgers are currently 339th in the country in terms of length of offensive possession. They average 19.8 seconds per possession on offense. That needs to be sped up. Hayes and Koenig are both better when running. You have a big in Ethan Happ, who can run the floor and handle the ball. Surround that with Showalter, Pritzl, Trice, Brown and you have guys that can all get up and down the court.

They are only getting 5.9 transition possessions a game. That’s laughably bad. But, it also happens to be one of their most productive offensive ‘sets’ as they are getting 1.012 points per possession when running. While Koenig is obvious fantastic with the ball in his hand, he’s a pure enough shooter that you can let someone else push the tempo and have Koenig spot up. When Wisconsin goes small and runs Trice, Koenig and Showalter out there together with Hayes and Happ, this is the group that needs to be playing in transition. You have a couple ball handlers, a couple shooters and guys that can attack the rim. Instead of slowing down and constantly cutting through the lane, just spread out and run for a couple minutes.

Here’s a prime example of how it should look and we even get to watch Happ lead the break. Off a defensive rebound, Happ should look to push tempo like he does here. If nothing is there, fine, back it out and get it to Koenig. But here we get to see Hayes and Brown both fill the lanes correctly with Showalter trailing and eventually hitting the open three. This is how Wisconsin should play at least 20% of the time instead of 7%.

Finally, the last thing that’s been disrupting Wisconsin on the offensive side of the ball are the hard double teams on Happ in the post. We’re seeing teams focus on this more and more, since everyone is finally realizing Happ is the best player on Wisconsin. We saw Northwestern throw a bunch of doubles at him and now it’s becoming an every game thing. Happ has to be better at playing out of the double team, especially out of the right block. Out of the 69 (nice) hard (double nice) teams he’s seen this year, 32 have come with him on the right block. Wisconsin is scoring .562 points per possession when that happens and Happ has a 15.6% turnover rate. Part of this goes hand-in-hand with what I was saying previous about playing at a faster tempo. The quicker you get up and down the court, the less chance the double comes in the post. Along with that, Wisconsin has to shoot the ball better. Teams are leaving these guys open for a reason.

This team has been wildly unimpressive this year and has a resume that’s pretty subpar. They don’t have a signature win and have lost the majority of those key games. As someone has pointed out to me, they feel a little bit like Wichita State last season in the sense of returning everyone, high expectations and just didn’t improve. Now, this isn’t to say they don’t turn it around as the NCAA Tournament can forgive a subpar season, but if you’re a Wisconsin fan right now you’re terrified of missing the Sweet 16, something that seemed impossible just four months ago.