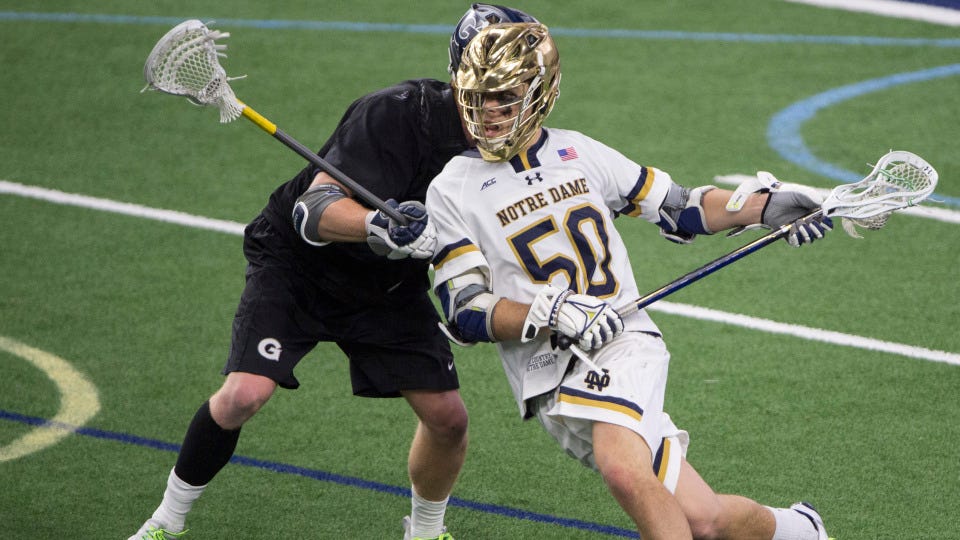 We’re less than a week away from March. The weather feels like spring despite that fraudulent bitch Punxsutawney Phil saying we’d have an extra 6 weeks of winter. And we’re in the midst of week 3 of the 2017 College Lacrosse Season. Folks,,,, it’s the most wonderful time of the year.

So here’s what we’ll be doing–weekly roundups every Friday of all the action you may have missed over the past week and what to look forward to during the upcoming weekend. Could be big goals, could be big hits, could be big movement in the rankings, whatever. All we’re here to do is lax it up and enjoy the Creator’s Game. Let it fly low-to-high, and let the haters die. Let’s get after it.

For starters, here’s what the USILA Poll looks like for week 2. One thing you’ll notice right off the bat… Hopkins. Is. Fucking. Back. 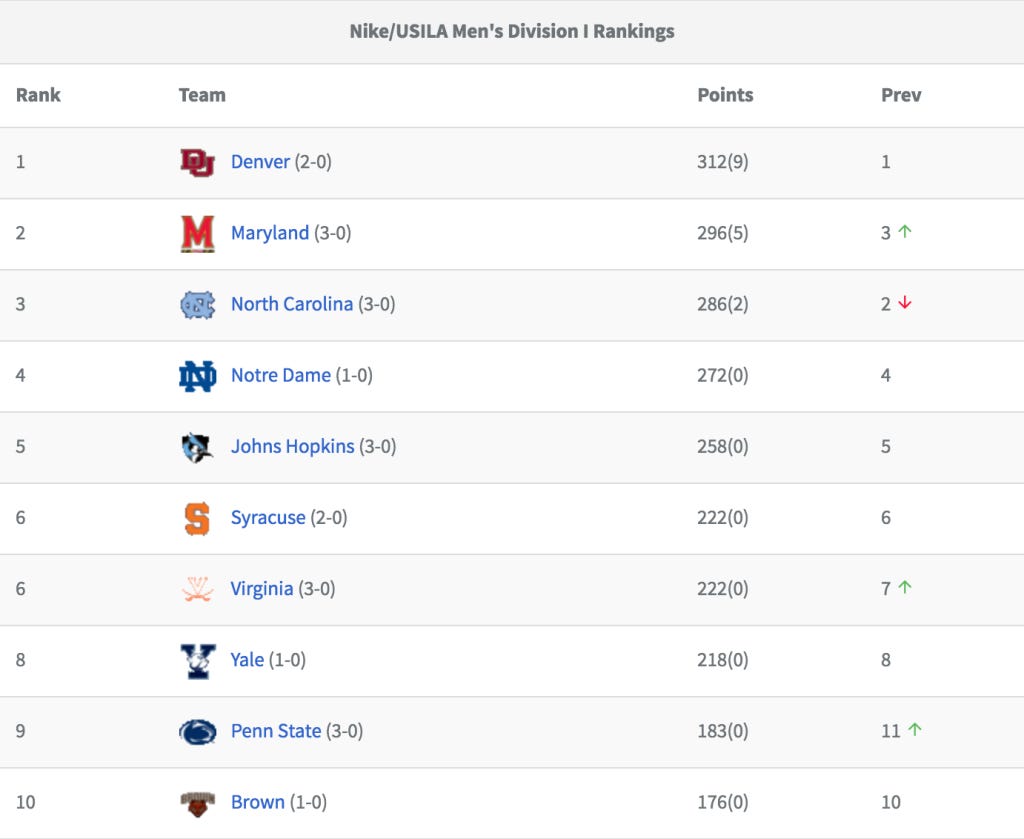 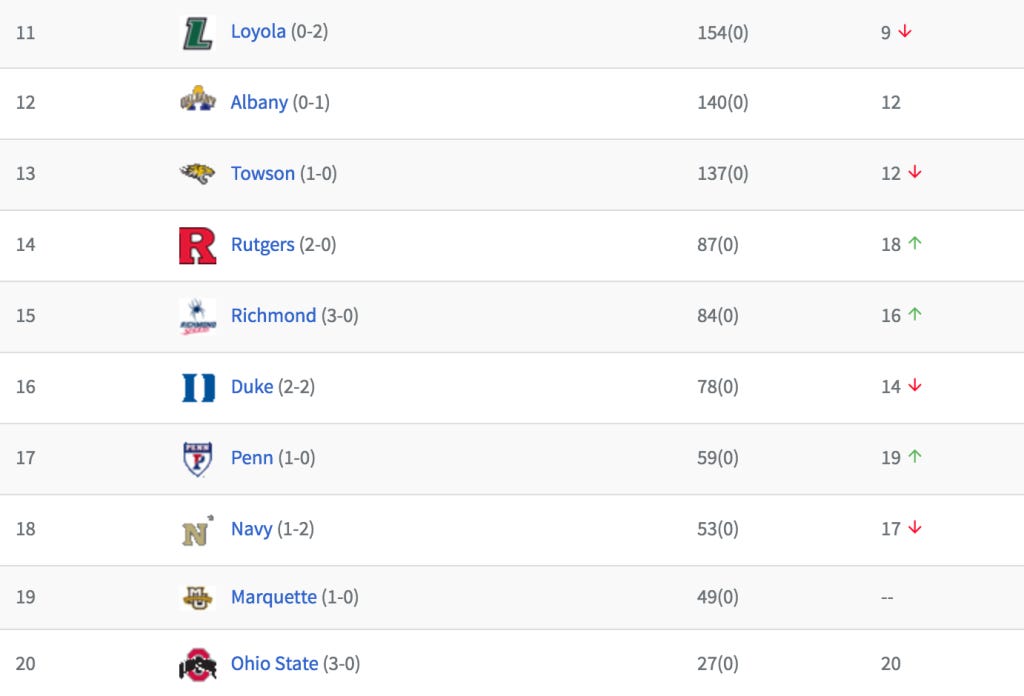 I don’t care who you are or what your stance is on the Hopkins band playing after every single goal scored. The lacrosse world is better when Hopkins is great and starting off the year 3-0 is exactly what this team needed after going 8-7 last season. Much of the early success for the Blue Jays is thanks to Joel Tinney and the fake flip. In case you’ve been living under a rock this month, here is exhibit A in overtime against Loyola last Saturday and exhibit B against Navy to open up the season.

5 goals and 2 assists so far this season. He may not be a Tewaaraton winner at the end of the season but he’s easily one of the most exciting players to watch in the country this year. So now #5 Hopkins will be playing in the game of the weekend against #3 North Carolina tomorrow at 1, at Chapel Hill. This will be the first big test for the reigning champs after they’ve started the season by taking down UMBC 17-6, Furman 7-3 and Lehigh 15-8.

Here’s the full slate of games to watch this weekend + gambling odds courtesy of @LaxVegasLines (I highly recommend throwing them a follow). 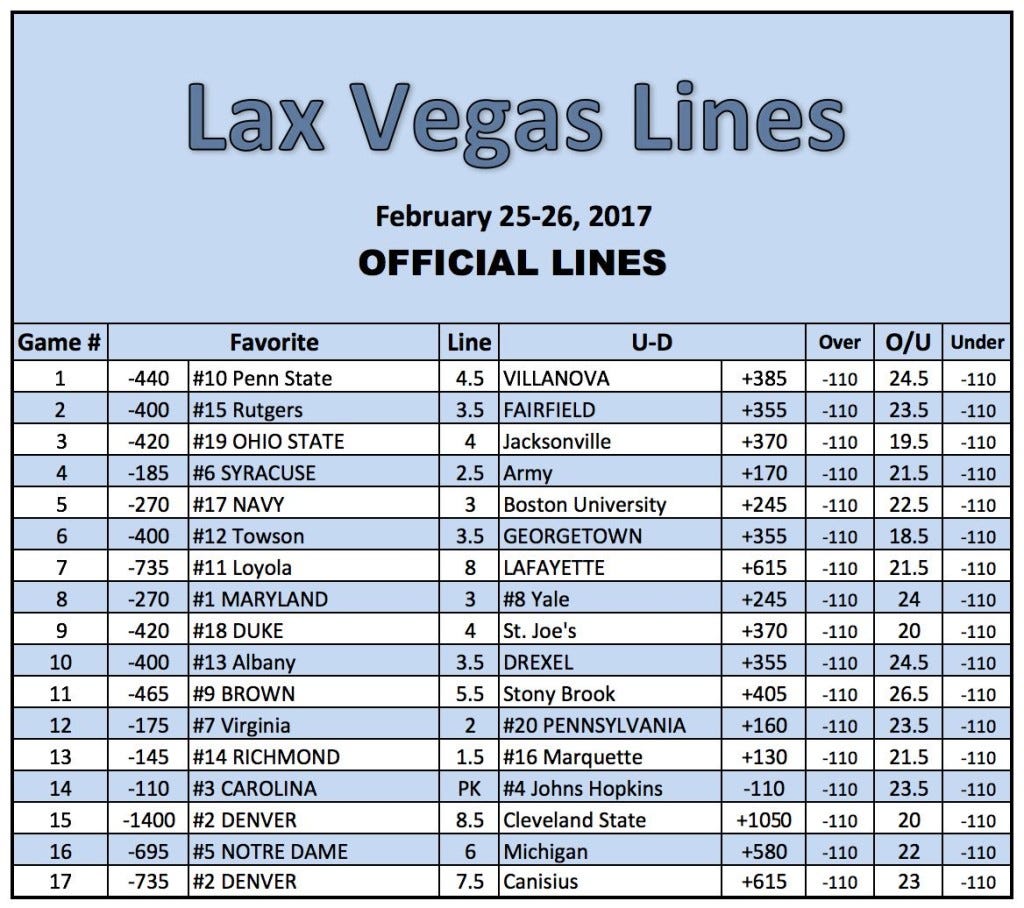 Like I said, Hopkins v UNC is definitely your game of the weekend. But let’s highlight some other games to look forward to tomorrow starting with Penn State @ Villanova. Why do we care about this game? Well because Penn State currently features 2 of the top 3 point scorers in the nation right now with sophomore Grant Ament and freshman Mac O’Keefe. Ament is tied for 1st with 20 points on 11 goals and 9 assists while O’Keefe has 19 points on 16 goals and 3 assists.

As a freshman, he started off his career with 7 goals against Robert Morris. Followed that up with a 4+3 performance against Hobart and then 5 G’s against Cornell. So between O’Keefe looking to keep up that ridiculous pace and Ament, the Haverford School product, coming back to the Main Line to play at Villanova, I’d expect Penn State’s offense to put on a clinic out there. Especially considering Nova has allowed 28 goals in 2 games so far this year.

Speaking of both Haverford School AND ridiculous freshman, Dox Aitken and the 3-0 Virginia Cavaliers have a Top 20 match up against Penn tomorrow. Virginia is another one of those power houses that look to be back this year after struggling last year. New coach in Lars Tiffany, start off the year with a 1-goal win over Loyola (who can’t seem to catch a break this year), an 18-14 win over Drexel and then an easy 20-13 win over Siena. Aitken was the #2 recruit in this current freshman class and hasn’t disappointed so far. He was the Player of the Week for the 1st week of the season after putting up 4 goals against Loyola and then 3 on Drexel. Virginia also has another freshman Michael Kraus from New Canaan who has put up 12 points so far this season, while the Wahoos are led by Zed Williams.

Here’s a little free scouting report to all D Coordinators who have Virginia on their schedule this year; maybe try to guard Zed Williams and don’t let him get his hands free. Like, at all. Because the second he has a little bit of separation, he’s sniping the shit out of you. Now here’s the thing. Virginia hasn’t been back long enough for me to see this game against Penn as a lock. That win over Loyola was a great statement win for this program. 1st game without Starsia in forever, they needed to pull that one out. 3-0 to start the year, do they keep it rolling and just dominate teams? I’m not sure. I think they get out of Philly with the win but I could see Penn making them work for a 1-goal win.

Let’s do ourselves a favor real quick and talk about Ryder Garnsey. Because I said above that Joel Tinney is easily one of the most exciting players to watch in college lacrosse this year. And I think if there’s anyone else in the nation who is equally as entertaining, it’s Ryder.

This honestly might be my favorite goal of the season so far. Maybe I’m biased as a lefty myself who has nothing but respect for dodging to your right while still finishing with your left. But the way he sneaks this short side is just pure filth. 6 goals and 2 assists in the season opener against Georgetown for Garnsey. That was Notre Dame’s only game so far this year and they have Michigan on Sunday. Watch Notre Dame vs Michigan become more of a lacrosse rivalry than football. It’s not going to be a rollover game for Notre Dame by any means. But it’s just impossible to cover somebody who is as smooth and creative as Garnsey is with the ball in his stick.

Only other Top 10 match up besides Hopkins/UNC this weekend is going to be the Terps vs Yale. I’ve said a few different places so far but Maryland is my pick to win it all this year after losing on Memorial Day last year. This is going to be the year that Matt Rambo gets it done. He’s currently 4th in the nation with 19 points on 9 goals and 10 assists. Which, ya know, is pretty decent. Especially considering how he ended last season.

Yale got their season started with a 16-11 win over Villanova last Saturday. Led by freshman Jackson Morrill who had 5 and 1. Maryland hasn’t had the toughest schedule in the world so far but I think between playing 3 games already plus Rambo on his farewell tour, the Terps come out of this one 4-0.

If I had to pick any upsets for this weekend, I’d say Marquette over Richmond is probably your best bet. Which is hardly even an upset at all but that is going to sneakily be one of the better games of the weekend. Both programs are still relatively new and I’d expect to see both of them stay in the top 20 all year long. It’s a home game for Richmond which will make the upset for Marquette a little more difficult to pull off. But that’s a game that’ll be a coin flip. And maybe Army over Syracuse because that’s a thing that happens from time to time.

– Oh yeah. Denver plays Cleveland State and then Canisius this weekend. Both at home. Both will be blowouts. Listen. I have a ton of love for the Pios. We’ll have plenty of time to talk about them more in depth as the season goes on. But those 2 games this weekend are going to be jokes and just an opportunity for Connor Cannizzaro to stack his Tewaaraton resume.

– As was the case last year, don’t sleep on the Ivy this year. Brown is still going to be dangerous as long as Dylan Molloy stays healthy. Harvard is off to a 2-0 start. And then there’s Princeton who is on the verge of a comeback. If you’re not familiar with the name Michael Sowers already, get used to hearing it now. Kid ended his high school career at Upper Dublin (PA) with the most assists in US High School Lacrosse history. Like out of everybody who has ever played high school lacrosse, he’s had the most assist. And through 2 games this year with the Tigers, he has 4 goals and 8 assists. Had the most assists in a freshman debut in Princeton history with 5. Granted, it was against NJIT but still.

– Might start incorporating some NLL previews into this post if that’s something that people are interested in. Toronto Rock go up against the Buffalo Bandits tomorrow night. If you’re into Americans playing box, that match up has Kieran McArdle and Tom Schreiber vs Blaze Riorden. Just a couple of beauties getting after it. Then you’ve got Calgary vs Saskatchewan. Here’s a goalie fight from when these two teams played earlier in the season. Rochester at Vancouver and then Colorado at New England on Sunday. No Swarm games this weekend so we’ll be without any highlights from the Thompson brothers. But yeah, if people want more box content then more box content you’ll receive.

– I’ll be at Drexel tomorrow to check out the savages of Albany take on the Dragons at 1. See ya there.

P.S. – Somebody tell Quint Kessenich to quit being a coward and unblock me.