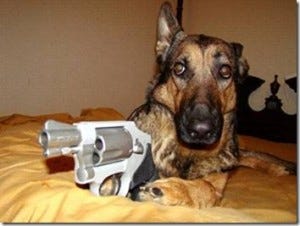 Source- A man told police that his dog was responsible for shooting his girlfriend while she was sleeping on Tuesday night. Brian Murphy told officers that he let his dog, Diesel, outside after the animal woke him up and when they returned to the bedroom, the room was completely dark. Murphy told police that Diesel walked in before him, and that he then saw a flash and heard a bang. Murphy’s girlfriend, Summer Miracle, had been shot in her sleep.

Murphy claimed that “Diesel jumped up on the nightstand, where (Murphy’s) gun was sitting, and it went off, shooting Summer in the right leg,” according to police. Miracle told authorities she was asleep when the bullet struck her and that she wasn’t sure how she was shot. WFOX reports that she was taken to the hospital with injuries that did not appear to be life-threatening.

I’ve heard of blaming your dog for a nice healthy fart or eating the homework. But shooting a girl in her sleep is some next level scapegoating shit. Now part of me wants to say that this could be true because I always look for the good in people. It’s the reason I would be the worst juror in the world. Because unless your DNA is at the crime scene, there is blood on your car and a glove from the crime scene matches a glove at your house, I’m going to think your are innocent.

However this is Florida we are talking about. They have people that are dumb enough to come up with this excuse, but also people dumb enough to believe it. And I wouldn’t be shocked it 90% of the guns in Florida are on a nightstand with the safety off. A dog with the name Diesel likely has the size to make a gun go off Plaxico style. And if that happens, nobody is going to believe your story no matter what you say. You are basically the person that calls out sick the day after the Super Bowl when you are actually sick with a 104 degree fever. Just shit luck.

All that being said, this guy definitely did it, right? If so, pinning this on what should be his best friend is an absolute travesty.