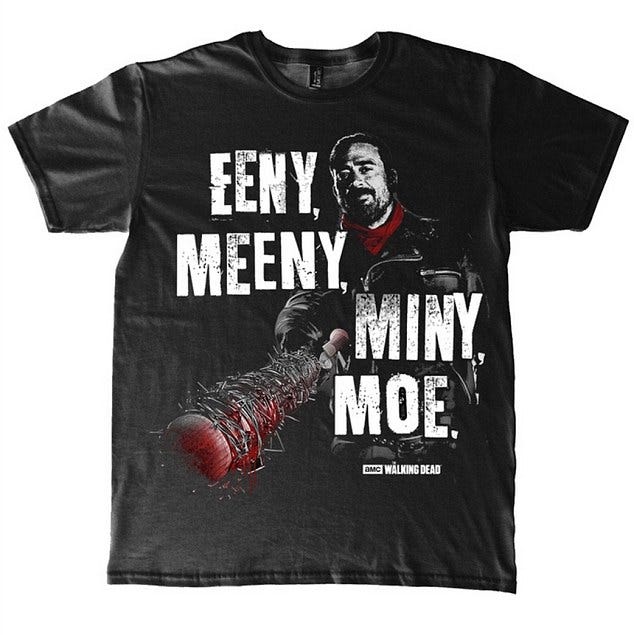 The Wrap- “The Walking Dead” has once again caused an uproar, and this time it’s not over onscreen gore or a shocking character death. A “Walking Dead” T-shirt has been removed for sale by a British clothing retailer, after a complaint that the shirt was “racist” and “fantastically offensive.” The shirt in question bore the image of a baseball bat and the message “Eeny Meeny Miny Moe” — a reference to a scene from the AMC zombie drama in which Negan (Jeffrey Dean Morgan) is deciding who in the protagonist group to kill. In the scene, Negan continues the phrase with, “Catch a tiger by his toe” — though, historically in the U.K. the rhyme has employed the N-word rather than the word “tiger.”

This is low. I’m aware that it’s 2017 and a bunch of stuff isn’t PC, but this? Might as well just stop selling Walking Dead shirts altogether in the fear that people might identify as a zombie and therefore be offended by the shirts. Eeny Meeny Miny Moe is a word-for-word quote from the show. It’s directly taken from probably the biggest moment in the history of the Walking Dead. (Spoiler Alert!) Negan crushing Lucille into Abraham’s head without a care in the world is the Walking Dead’s Deer Hunter. A moment that will forever live in infamy. Abraham’s eye popping out its socket? Best TV I’ve seen since Girls Gone Wild filed for Chapter 11 in back in ’03.

I haven’t been too big of a fan of the Walking Dead as of late and I’m pretty sure it’s jumped the shark quicker than Seinfeld after LD dipped out for the last couple of seasons. Despite that, there’s no denying that Negan is a joy to watch. He’s already one of my favorite television characters of recent memory along with Stevie Janowski, Rafi, and Leon Black. Negan gives no fucks on the show and it seems as if Jeffrey Dean Morgan does not as well.