.
Georgia – Just 20 days after he was hired, former NFL corner back Fernando Bryant was fired from the head football coaching job at Strong Rock Christian School because of questionable social media posts, according to his termination letter.

Bryant informed 11Alive’s Alec McQuade that the private Christian school asked him to resign on Feb. 19 after parents had raised issues about his past on social media. When Bryant refused to resign, he was terminated.  …

A source within the football program provided 11Alive with a screen shot of the social media post on Amber’s private Instagram account that the parent allegedly sent to the school’s administration. Bryant gave 11Alive permission to show the picture. In it, the Bryants are posing together holding what he admits to be a bottle of alcohol.

This is the photo: 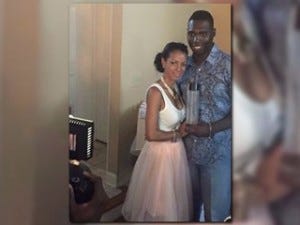 This is one of those moments when I’m reminded how glad I am that while all Catholics are Christians, not all Christians are Catholics.

God knows my church earned its spot on the wrong end of the pitchfork a few years ago. But no one gets fired for three year old Instagram posts of them and their wives holding a bottle. If a Catholic school teacher is photographed with booze in their hands, it just means someone was taking pictures for the bulletin at the rec hall on “Irish Night.”

Seriously, what is it with these denominations that their whole belief system is believing in God and stabbing each other in the back? I must’ve missed that part in the New Testament where Jesus tells the Apostles that in order to truly love him, they need to start ratting each other out more. And I’m reading that 500 year old picture DaVinci took of the Last Supper, that wasn’t Nestle Quik he was drinking out of that grail.

But good luck to you with your football program, Strong Rock Christian School. All you’ll need to replace Bryant is some out of work NFL player who’s also a Christian with zero vices whatsoever and has never stood in front of a camera holding a bottle that may or may not contain booze. I’m sure they’ll be lining up to work for your bunch of Helen Lovejoys.