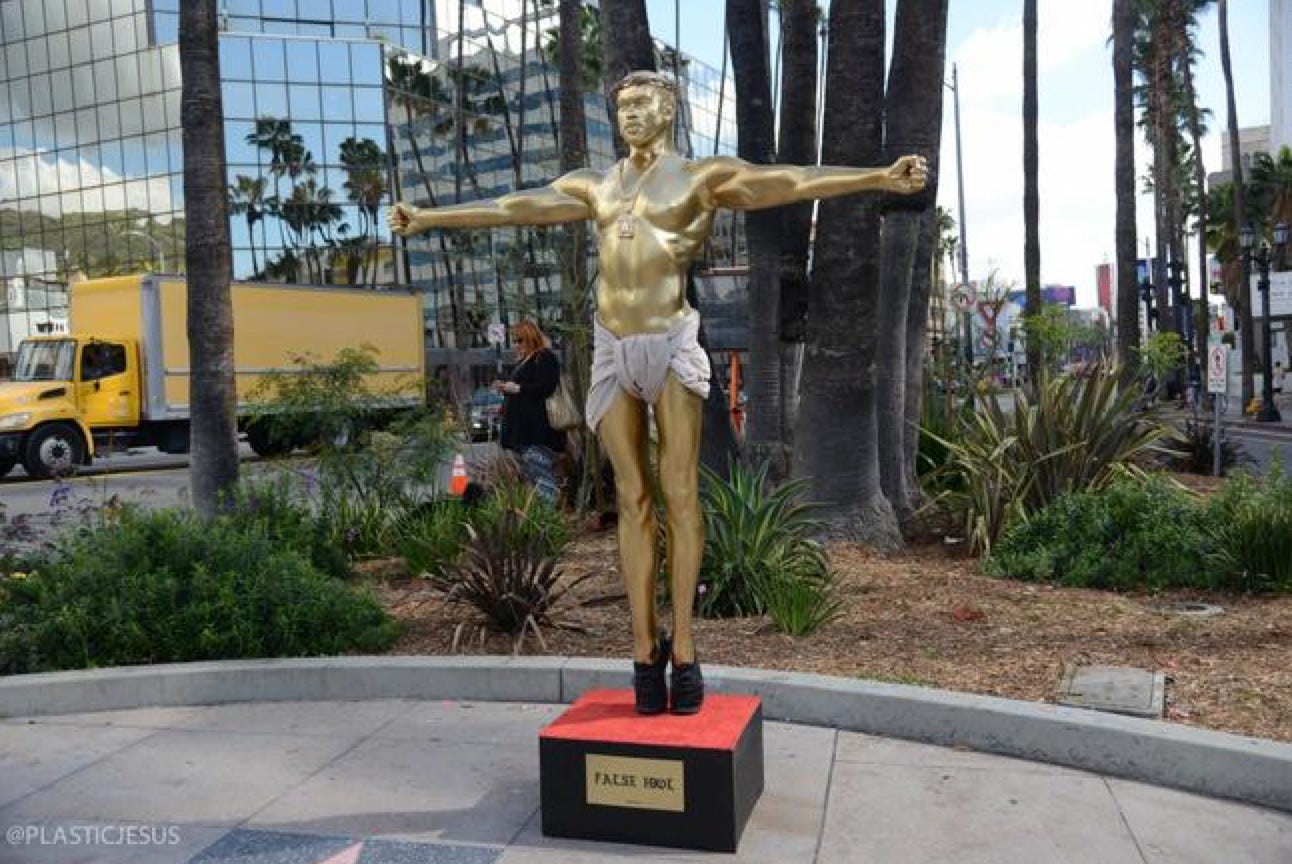 NBCLA- Ahead of Oscars weekend, a gold-painted statue depicting Kanye West as Christ on the cross popped up for a short time Wednesday in Hollywood. The life-sized crucifixion statue titled “False Idol” depicts the rapper as Jesus Christ, with nails in his hands, wearing a crown of thorns, gold chains, a cloth and Yeezy sneakers.  The provocative work of art is by Plastic Jesus, a Los Angeles-based street artist who is known for his political and cultural art.  The Academy Awards honors the best in film every year and is often a time of celebration for Hollywood’s elite. But, Plastic Jesus told NBC4 his art “focuses on the side of Hollywood that’s often forgotten” and touches on topics such as drug abuse, mental health and idolatry.  Celebrities are often elevated and treated like “God-like figures,” Plastic Jesus said. And, when they [celebrities] do show their humanity “we then crucify them.”

It was only a matter of time before this happened. And wait, I’m supposed to believe Kanye didn’t put that statue there himself? A full-sized Yeezus statue just happened to show up smack dab in the middle of Hollywood Boulevard? Cause I refuse to believe that. The article says some company put it there but that couldn’t be a bigger lie. This has performance art Kanye written all over it. Hell, that might actually be Kanye standing there painted in gold. I wouldn’t put it past him. We’re at a weird point with Ye West. He’s been out of the spotlight for a litttttttttttttle too long. The next thing he does is gonna be bat shit crazy, Like, ya know, putting a full-size Kanye statue somewhere. You know what I think is gonna happen? I think Kanye is going to replace that statue with himself at some point and see how long it takes people to notice. It’s also only a matter of time before Kanye diehards are out there praying to this fucking thing. I don’t blame them. I might catch the next flight out and go pay my respects.