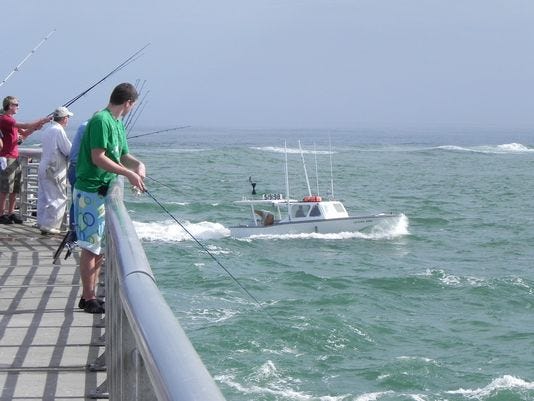 At Sebastian Inlet fishing pier, lines often cross. And tangled tackle ticks off fishermen so much, they often revert to territorial tactics, casting aspersions and sometimes other things at their angling adversaries, inlet officials and fishermen say. They hurl lead fishing weights, lures and other objects at folks fishing from boats. Or sometimes boaters are the primary aggressors.

Signs and video cameras haven’t tempered things much. Inlet officials say that in the past few years, the pier atmosphere has degraded into a state of constant territorial marking, as things just keep hitting the fan — and sometimes even the concrete pier and its cylindrical metal rails.

“We’ve had reports of people defecating and spreading it on the rail to mark their territory so nobody will fish next to them,” said Martin Smithson, administrator for the Sebastian Inlet District. “There have been several citations for public urination.”

I’m not mad at the folks marking their spots with their own poop. I understand it. When you head out to fish, you don’t want a bunch of nerds hanging out near you talking about their tales from the past. You want peace, quiet, and space. In my experience, the best way to ensure that no one stays near you is spreading a little poop around. It’s a tried and true method whether you’re a puppy or a person.

And to be fair, what’s the real risk? Fishing piers stink anyway. You are surrounded by fish guts, blood, heads, and people pissing out cheap beer. It really doesn’t even add to the stink level all that much. If you get a prime fishing spot, why in the world would you just give that up? A honey-hole is worth it’s weight in gold. Mark it by any means necessary. That’s the rules of the water. That’s the rules of nature. Last time I checked, humans were still animals, folks. Mark away. Fish on.