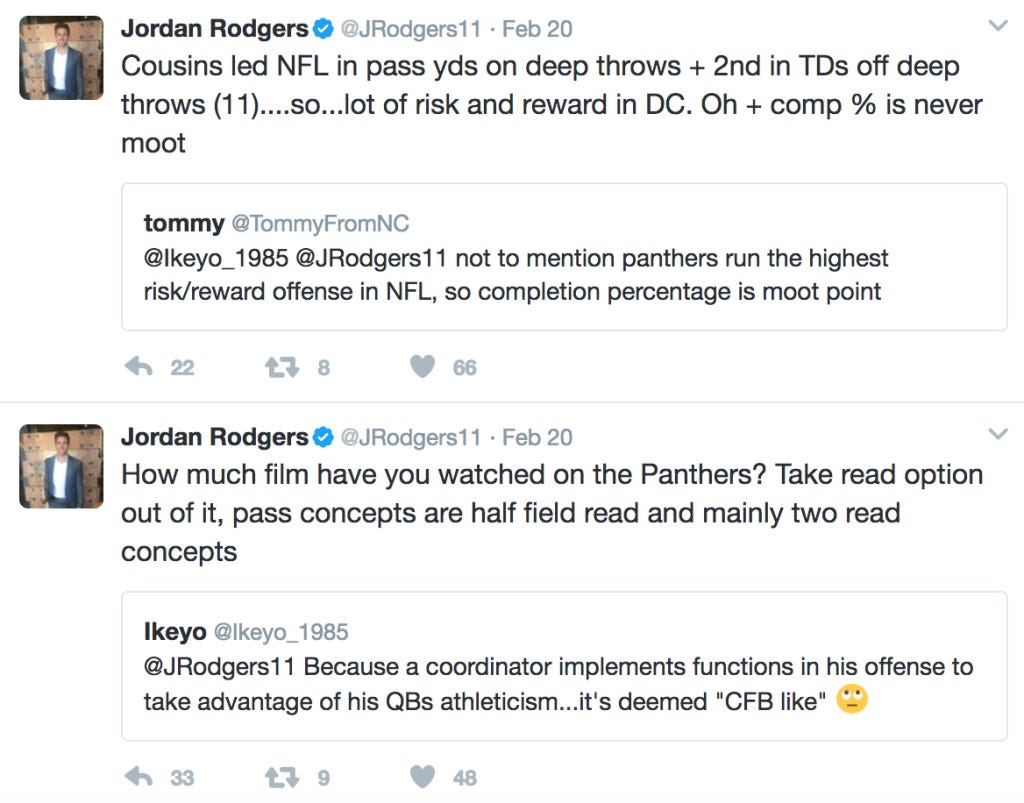 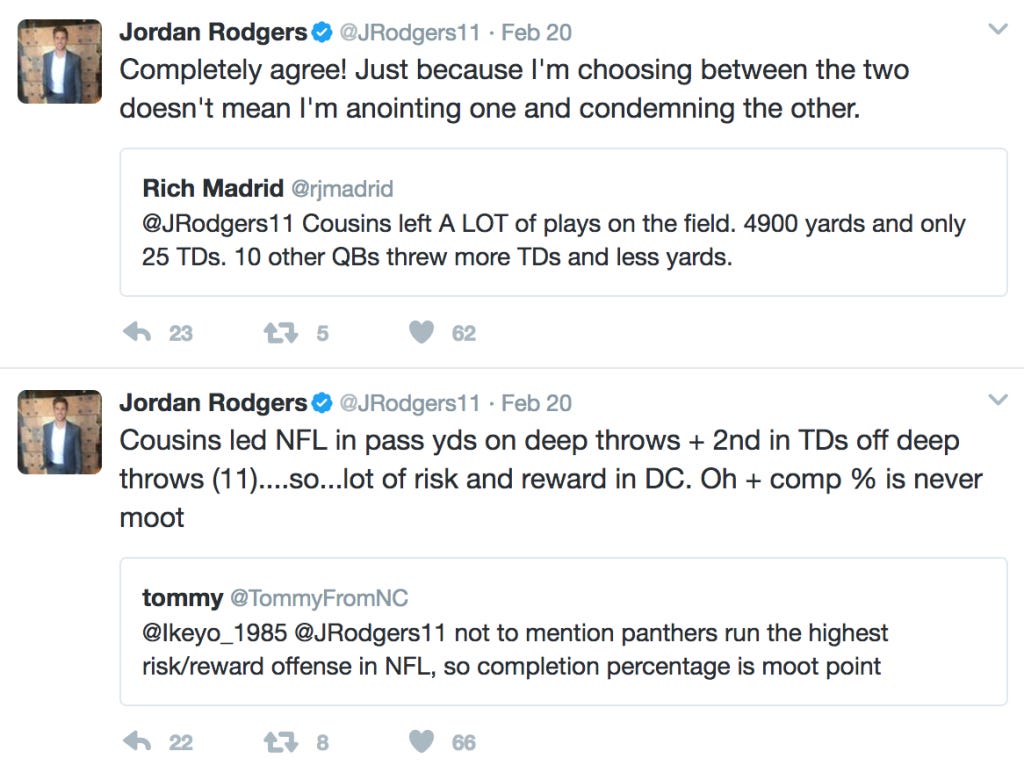 This is now a conversation that has bloomed up out of nowhere. Take a guy, compare him to a completely random other guy out of nowhere, and now we have people talking about it. Kirk Cousins or Cam Newton- who would you rather build a team around? And Jordan Rodgers is firmly on Team Cousins. He continues:

WaPo - “The thing that I think that gets lost in this — yes, he had an MVP year. Yes, they went 15-1. Yes, I believe he is the most talented physical specimen at that position in the history of the game,” Rodgers said of Newton. “But there are a lot of good defensive coaches out there. You know what gets figured out? Athleticism. What happened to Robert Griffin? Athleticism. Teams caught up to him. They figured how to scheme him.

Newton, Rodgers pointed out, has had a QB rating above 90 just once in his six years as a starter. Cousins is 2 for 2. He called Newton “by far the most physically gifted athlete to ever play the position” but said “that does not make you a good quarterback, nor does that make you a franchise quarterback on its own. … From a skill-set standpoint, [Newton is] elite. From an arm standpoint, elite. But arm talent and physical strength is not a predictor of success.”

If you read the full Washington Post article, Rodgers is very articulate with his reasoning. He says basically everything I/everyone else who watches Kirk says- very accurate, consistent, room to grow, not even at his peak yet, etc. He’s been a starter in the league for only 2 years, has a great TD:INT ratio, and has thrown for a combined 9,000+ yards over the last 2 seasons. Again, I don’t know why we are comparing Cousins to Newton, seeing as they are two completely different QBs, but here we are, the NFL offseason, and that’s the kind of thing that happens…

…And since that’s the kind of thing that happens, Tiki Barber decided to voice his opinion on the Kirk vs Cam debate:

WaPo – Well, if Tiki Barber had a vote, and he sort of does in the form of the CBS Sports Radio show he co-hosts with Brandon Tierney, the former Giants running back would agree with Rodgers and take Cousins over Newton for many of the same reasons Rodgers laid out. (Rodgers essentially argued that teams eventually figured out how to defend Newton’s athleticism, but there’s no defense for quarterbacks such as Cousins, who go through their reads and complete a high percentage of their passes to a variety of receivers.)

“Jordan Rodgers is basically stating the obvious, but he said it in a way that actually makes a lot of sense,” Barber said Wednesday. “Kirk Cousins is actually the more viable option, because Kirk Cousins will sit in the pocket and find his guy and read a defense and know pre-snap where he’s going to go with the ball, and if something breaks down, then he finds his checkdown back. Those two guys who they had in Washington were fantastic in giving him support in that role, so yeah, of course you take Kirk Cousins over Cam Newton, even though Cam Newton was the MVP. With Cam Newton, you get an MVP season one year and then the next year you get what the hell we saw in 2016.

Again, pretty solid reasoning. The NFL is a league of consistency. Cam Newton was a disaster this season, while Kirk continued to lead the Skins down the field, game in and game out. Long term, guys like Brady, Rodgers (the good one), Manning, etc always seem to have better careers than the guys who rely more heavily on their athleticism like Newton.

Again, no clue why we are arguing Kirk vs Cam, but I’m here for it. I need everyone to start chiming in. I need this to become the hot button, hot take, Skip and Stephen A shouting into outer space about it, topic of conversation. Please let this become a “thing”, lord of the NFL offseason. We need this.