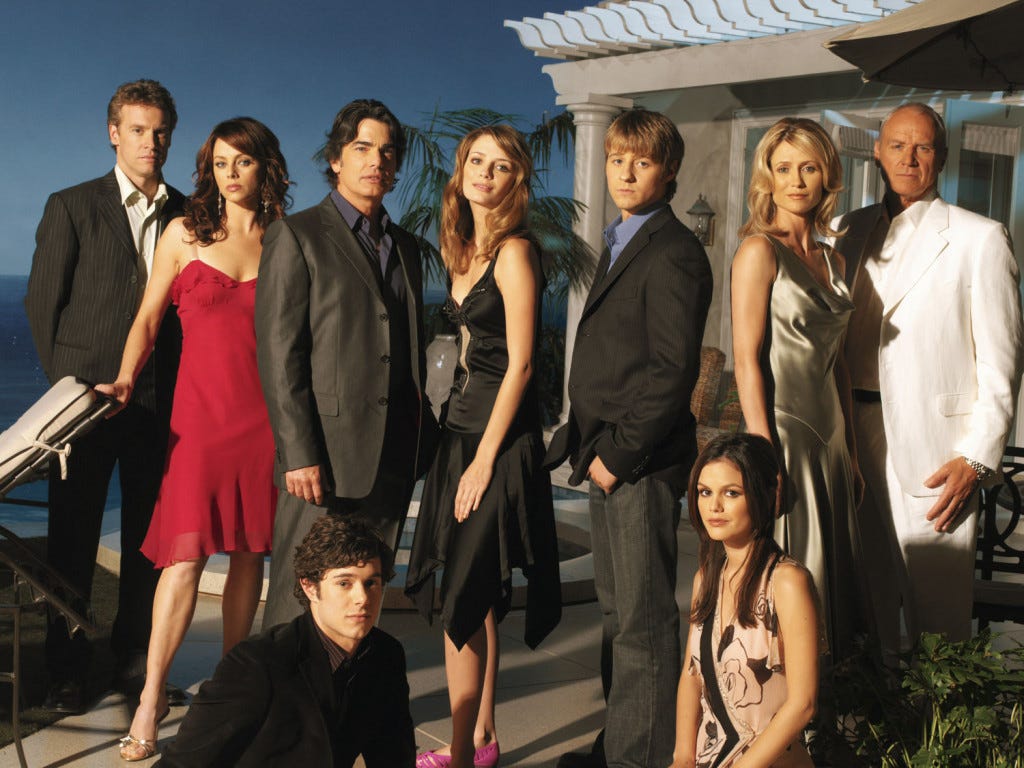 There are few shows out there that tie so closely to my life as The OC. It debuted when I was in college in Los Angeles, much like the Ryan Atwood character I was very much a bad boy fish out of water with a heart of gold (exhibit A: Me in a leather jacket in my acting headshot) just trying to make it in a newfound Southern California venue. And beyond that, the music, the characters, the whole “watching rich people in dramatic situations” angle of the show, every single bit of The OC worked for me. Hell I watched the first two seasons of Gotham just to see the guy who played Ryan, Ben McKenzie, back on my TV every week.

Now coincidentally just a day after I tweeted this in honor of our dearly departed Larry II:

…it turns out it’s the 10-year anniversary of The OC‘s series finale? Too much kismet not to blog about it. So here’s my list of top 5 show moments and, since it’s one of the most influential musical shows ever, top 5 songs. To be clear, these are all my opinions since there are WAY too many things to choose from (and also a lot that I could have shit talked, looking at you Oliver and Teresa respectively). You may have your own. Mine are more correct though because I’m presenting them in a highly read blog. Sucks for you. Here’s the lists:

Honorable Mention. Sandy reluctantly brings Ryan home when he realizes his life in Chino is a shit show

Beautiful song, awesome moment, the motherfucking CHINO CAM where everything looked like that movie Traffic. It’s only the singular most important moment in the show (and one I would have left out if I could have found a good YouTube compilation of Ryan punching people into swimming pools). But honestly Sandy Cohen was a top 5 best dad/surrogate dad in TV history and the man needed a little shine here. Bless his heart for bringing Ryan into his family.

Olivia Wilde years before she blew up making out with Mischa Barton as Marissa Cooper…instant must-include. This was one of Olivia Wilde’s first big roles in fact and in a career of being an absolute sex pot, her being the edgy teenage temptress turning a vulnerable Marissa Cooper to a life at the salmon factory might be her at her hottest. Hell of a way to arrive on the national scene on a then-hit show. Marissa was an absolute drain on the show whenever she wasn’t being the love of Ryan’s life — in the way many of us have a girl we dated on and off around the same age who was exactly the same — but hooking up with Olivia Wilde’ll keep you relevant.

4. Summer dressed up as Wonder Woman to fulfill Seth’s fantasies

A special Chrismakkuh (the merged Christmas/Hanukkah holiday the Cohen family celebrates) episode on The OC, a world where girls choose Halloween costumes to fulfill the sexual fantasies of their high school boyfriends. What a magical world. But really few scenes in the show sum up the sexiness of Rachel Bilson’s Summer character along with showing how happy they both are. To be that young, that happy, with a smoke girlfriend dressed up as Wonder Woman? Live the dream you fictional boy Seth Cohen, you. Live the dream.

The scene that launched one of SNL’s greatest digital shorts and was also the wallpaper on my computer in college for a bit. Trey was a loose cannon, ruining Ryan’s life, and also had tried to sexually assault Marissa on a beach. Not very brotherly and, in fact, possibly deserving of a bullet. He would hang around on the show in coming years mostly reformed but as far as shockingly accurate and well-deserved gun shots on teen dramas go, this one is high up there. A helpful lesson on both gun control and how a well-aimed gun can solve a problem.

Long after her character had outlived her usefulness on the show once creators decided that Ryan Atwood and Marissa Cooper were not soulmates, Marissa Cooper died in the middle of getting back together with Ryan. She was driven off the road by Volchek, played by that dude who’s handsome and ripped but kinda has a little person face in movies like Twilight, a character not all that useful other than finally getting rid of the Marissa Cooper albatross so our boy Ryan could finally live his life without that anchor around his neck. Have I made clear yet how Marissa Cooper was every awful female trait to date rolled up in one kinda hot possibly anorexic character?

Life comes full circle, Ryan reflects on all the moments in Newport Beach that made him whom he is, we learn everything worked out for everyone including the still-goosebumps inducing Seth/Summer wedding, and now-architect Ryan sees a wayward kid just like him and presumably pays it all back by giving him a shot at a better life. Fucking. Poetry. The show lost its way in the last few years but that ending is as flawless as it could get without showing Marissa die one more time.

And the top five songs, some of which may be heavily influenced by the scenes they were attached to…

A hell of a cover by Nada Surf of a classic song, perfectly paired with Seth Cohen saying goodbye to the girl he chose Summer over, Anna. Choosing between two hot girls set to an electric indie soundtrack, we’ve all been there:

Another magical moment carrying the song as much as the song makes the moment. But Ryan hustling to keep his girl from sharing a midnight kiss with that cockblocking drain on Earth they call Oliver was so fucking relatable, so fucking perfect, goddammit I want to punch someone in the face for trying to kiss my chick as I type this out. Ryan Atwood would do anything for love. And he would punch that. Oh lord, no he would punch that.

First: Some Coldplay songs still bang, don’t be too much of a tough guy to admit that. Second: If you can hear this song and not want to find someone whose very existence somehow fixes the various flaws within your heart and brain, no matter how unreasonable and impossible it is, then frankly you are not the kind of savage beast who can be soothed by music.

Perfect combination of song and moment. Seth and Summer’s first official kiss as a couple, her rebounding after basically cucking him all day at a kissing booth, her being feisty. Song gives me goose bumps and makes me want to find someone to not die alone with, every single time.

Seth sailing away as life loses all meaning, Ryan dealing with some real life shit like his chick making him question her loyalty to him, teen angst all around us paired with hauntingly beautiful music that stays with you 10 years after the show left the public consciousness. Becoming a man or running away from it as fast as you can set to the hottest indie soundtrack ever. That’s what The OC was to me.