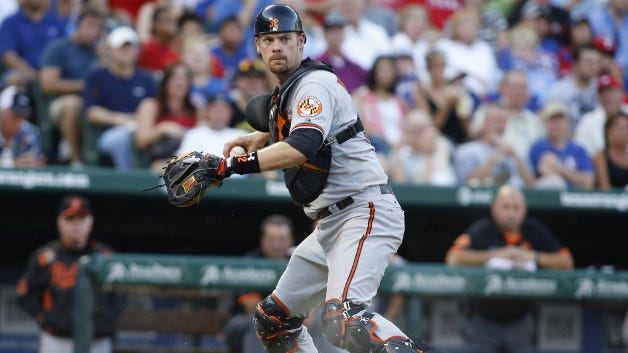 We knew this day was coming for a while, the writing was on the wall. Buck had spoken openly about the tears that he shed in an after season meeting with Matt Wieters. Yesterday, the Washington Nationals and Matt Wieters agreed a 2 year deal worth $21 million, including an opt out after this season. While it took Wieters MUCH longer than anyone would have expected for him to sign somewhere, Wieters ends up getting over $10 million a year. Early in the offseason, it was rumored that he wanted Russell Martin and Brian McCann money, around $80 million. The Orioles weren’t going to give that to him, and now we find out that no one else would either. His market dried up, and Spring Training started with Wieters not having a job, I don’t think anyone saw that coming.

While Oriole fans knew he wasn’t coming back, it didn’t feel like he was really gone yet. On local radio stations, people were calling every day to ask what the chances were that Wieters would come back to Baltimore. There was no way the Orioles were going to pay Welington Castillo and Matt Wieters starting catcher money, and no way Wieters would come back and not be the main guy here in Baltimore. 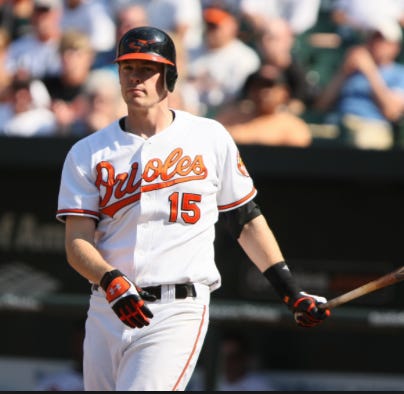 Was Matt Wieters the best catcher who has ever put on shin guards? Was he the best backstop to pick up a bat? Not even close, but that is what we were told he was coming out of college, but it’s impossible to live up to the nickname “Jesus in cleats” or “Mauer with power”. So when people call Matt Wieters “a bust”, or say he didn’t live up to his potential, it’s not true. The guy had ceiling high expectations and was a number 1 overall prospect at the most demanding position on the diamond. But you can’t ignore what Matt brought to the Orioles in his eight years in Baltimore.

He was drafted when I was downey ocean at Senior week, my buddies and I drank Natty lights watching MLB network and their analysts drool over the catcher/closer from Georgia Tech. The O’s were garbage at at that time, so Wieters was going to be our savior. I’ll never forget the buzz around the area when Wieters was brought up. They announced his call up on national TV, not through a press release, or tweet. You remember where you were for his first at-bat, even though he went 0-4 that first game. The attendance for the game before Matt Wieters was called up was right around 11,000. Attendance for the game where Wieters made his MLB debut? Over 42K.

His first hit was a triple to dead center off of Justin Verlander, that was the point where we knew that this Matt Wieters guy could be pretty good. Wieters got Baltimore excited for baseball season. He was one of the main pieces in the rebuild of Baltimore baseball, along with Nick Markakis and Adam Jones. He never got as much publicity as those guys, but I don’t think he wanted it. He just wanted to help the club win, and he did. Normally you have a catcher who is a stud on defense but can’t hit, or you have a guy who can mash, and has 0 interest in defense. Wieters was the best of both worlds.

While he never really lived up to the offensive force we thought he would be, he still is a career .256 hitter with an OBP of .318, and has hit 117 homers in eight seasons and driven in 437. Those numbers put him near the top in every offensive category for catchers.

During his time in orange and black, Wieters won two Gold Gloves, and made four All Star games. His defense is where he really excelled, especially for being a 6’5 catcher. The guy had a rocket arm (Don’t.Run.Ever.) and was a very good fielder. Nerds will tell you he is a below average pitch framer, but if you ever heard any Orioles pitcher talk about him behind the plate, they knew he was a top 5 defensive catcher in the game. He was a leader on the field, and in the clubhouse, the guys loved him there. He kept them loose, while maintaining a serious attitude when it came to winning. He isn’t the Hall Of Fame catcher that we thought he would be, but he’s a god damn good catcher. The Nationals are getting a fantastic player, one that their fans (mostly O’s fans) will no doubt fall in love with.

The Nationals always seemed like a good fit for Wieters, it was a known fact that Wilson Ramos would leave, and even after they added Derrick Norris in the offseason. He’s basically in a one-year deal, and I expect vintage Matt Wieters for the guys in DC. I’m sure he is drooling at the chance to catch guys like Max Scherzer, Steven Strasburg, and Tanner Roark. It’s a great opportunity for Wieters, they have a great lineup, so he can bat lower in the lineup with no pressure on him.

It’s hard to pick my favorite Matt Wieters memory, too many to pick from. Could be the Opening Day walk-off last season, the game winner against Chapman by almost taking his head off, a walk off granny against the Rays a few seasons back, going yaya from both sides of the plate in the last game of the season last year, him gunning Odor when Odor was basically on second (see tweet below), game winner in the 9th on his birthday last season, blocking the plate when a Yankee beat the throw by 3 feet. The guy did it all and was clutch AF. 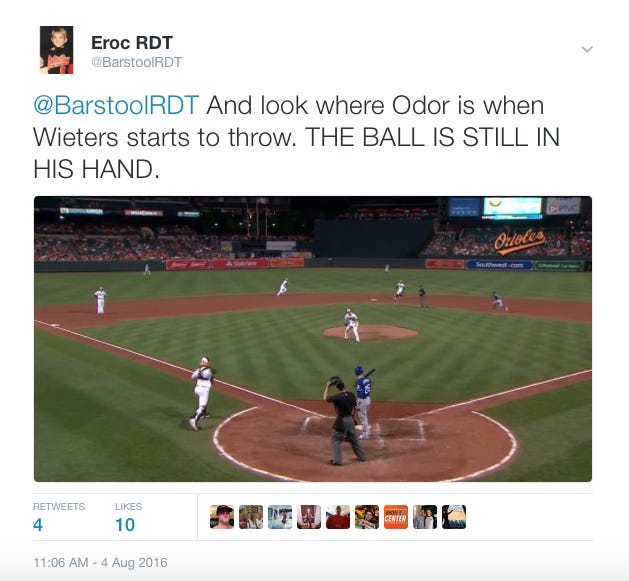 The best thing about him thought was how he rejuvenated a city and helped bring back the love for baseball to Baltimore. Matt Wieters meant more to Baltimore than what he did on the field, he was a cog in the Orioles wheel and we will never forget what Matt did here. I fully expect him to get a standing ovation when the Nats head up 95 in May and they come to Camden Yards, Matt deserves it. Go ahead Nats fans, ask me about my Wieters if you wanna know anything.

PS. I used to think the Matt Wieters Facts website was the funniest thing in the world. Would make them my away messages on AIM all the time.