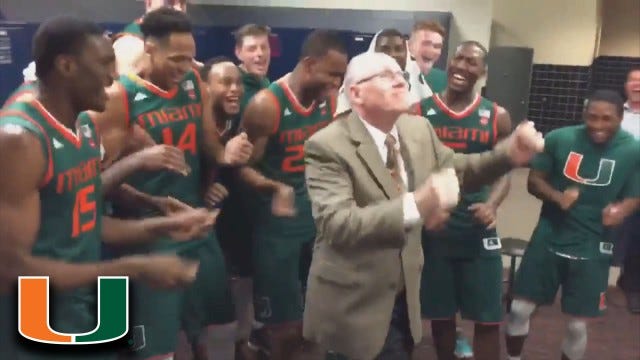 This was the scene last night after Miami beat Virginia in overtime in perhaps the ugliest game of college basketball we’ve seen this year. This is a 67-year old man who just won’t stop dancing in the locker room after big wins and winning the heart of every American. Before we get back into Larranaga I want to take a moment to talk about Virginia and the absolute free fall they are in. Last nights loss summed up Virginia for the three games. They are averaging 48 points per game, including last one that went into overtime. I’ll say it again. Virginia is averaging 48 points per game the last three games. You can’t play this slow tempo (they are the slowest in the country with 21.2 seconds of average offensive possession) and expect to continue to win games. There’s no room for error when there just aren’t a ton of possessions. It allows inferior teams to hang around or you don’t take advantage and push the lead up to 12-15 when you can.

But, that’s conversation for a later day. In the meantime just watch Larranaga be a better dancer than you.