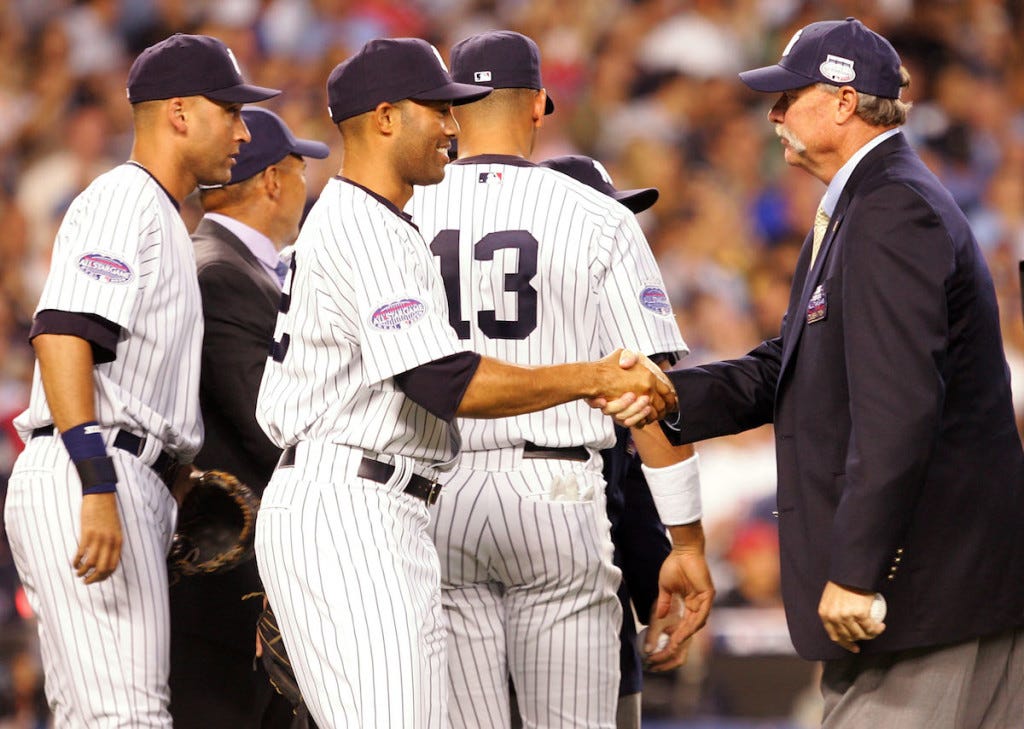 None of the above. Baseball season doesn’t truly begin until Goose Gossage arrives at Yankees spring training camp and shits all over a player with a wildly unpopular opinion. Last year, it was Jose Bautista, who Gossage said is a “fucking disgrace to the game” for flipping his bat against the Rangers in the 2015 ALDS. This year, it’s Mariano Rivera, for absolutely no reason whatsoever. Just because he felt like going on a “back in my day” rant.

“We were workhorses,” Gossage said. “Starters still prided themselves in finishing what they started and when they got in trouble, that’s when we came into the game. I’d like to know how many of my saves … how many inherited runners I came in with and a guy like Mo, how many inherited runners did he come in with? My point is not to knock what Mo did. I’m saying that he could be utilized more efficiently and more beneficial to your team by bringing him into games earlier.”

When asked his thoughts about people calling Rivera, MLB’s all-time saves leader, the greatest reliever of all time, the 65-year-old Gossage let his feelings be known.

“That’s bullshit,” Gossage said. “Do what I did and we’ll compare apples to apples. Or [Bruce] Sutter or Rollie Fingers, the guys that set the bar. I’ll tell you what, setup guys have a harder role today than closers today.”

The Hall of Famer was asked if he was okay with a relief award being named after Rivera. Predictably, he doesn’t like that.

“No. I wished I had pitched one inning. I might be still pitching at 65.”

So much to dissect here, so we’ll just start at the top. Love the “this is not a knock against Mo” line as a preface to shitting on his entire legacy. It’s like the drunk uncle that says “no offense” before he goes on a racist tirade at Thanksgiving dinner. Let it be known, I respect the hell out of guys like Gossage who dominated out of the bullpen for multiple innings, similar to how Andrew Miller is being used now. But that’s just not the way it is anymore — for very logical reasons, I might add — and it hasn’t been that way for a long time.

I will say one thing, though — he’s got a point about the one-inning, three-run lead rule when it comes to the save statistic. If you can’t protect a three-run lead, and you only have to get three outs to do it, you probably shouldn’t be a major league reliever. But to hold the specifications of the save statistic against Rivera is WILD. You’re out of your mind if you felt anything but confidence with Rivera on the mound with a one-run lead.

That being said, this idea that Mariano Rivera somehow isn’t the greatest reliever of all-time, just because he pitched one inning at a time, is the dumbest take I’ve ever heard. He’s the all-time saves leader, he dominated as a closer for two decades in the American League East, he dominated throughout the Steroid Era, he dominated in the postseason, and he did it all in one of the biggest sports markets on the planet. Every unit of measurement that you could use to quantify greatness, Rivera passes the test.

Again, you have to consider the source. Gossage used to be known for being one of the most dominant relief pitchers of all-time. He still is that. But now, he’s becoming more well known for being the old man yelling at a cloud.