Lot of asymmetrical scorelines so far in the first legs. Logic dictates that it is only a matter of time until we get stuck watching some more “cagey” affairs, though just saying that means today’s game will probably both end up being 6-5 shootouts (you’re welcome)… and in fact one of them really could. As for the blog itself, I am pretty proud of how short I managed to keep it (there only being two games helped a little bit), but before we get to the good stuff here’s some music to get your mind right:

Reminder of the results from games past and schedule of games to come: 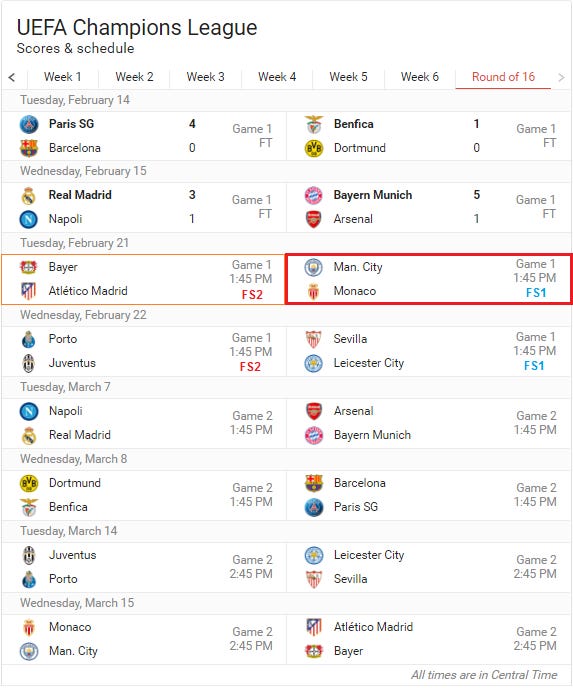 Quick and dirty breakdown on City: offensively they are not going to give Barcelona a run for their money (though to be fair Barcelona doesn’t seem to be giving Barcelona a run for its money lately) but they have enough firepower to hang an ugly number on you if you’re not careful – even without their new lord and savior Gabriel Jesus. Defense has been a serious problem for the club for much of the season, however, they have quietly begun patching the leaky ship since mid-January when they got skull-boinked by Everton 4-0. In fact, they have conceded only one goal in the last month (a 5-game span).

Quick and dirty breakdown on Monaco: unlike City, the club naively agreed to abide by the letter and spirit of UEFA’s Financial Fair Play rules, which forced them to sell off a lot of bigger-name players (think James Rodriguez, Emmanuel Rivieri, Yannick Ferreira Carrasco, Geoffrey Kondogbia) and replace them with more up and coming young talent. So far Plan B seems to be working out remarkably well though as the Frenchies have lost a grand total of two games since mid-October. One of the few holdovers from the wannabe-Galacticos days is Falcao, and you will be forgiven for laughing about a team whose featured striker is the former United and Chelsea “superstar” but here’s the thing: they are actually very dynamic going forward. I mean, 76 goals in 26 games domestically is good even if a lot of it is coming against the Nancy Lorraine’s and Dijon Mustard’s of the world. (For a little perspective, PSG have scored only 50 goals.) Defensively they are not quite as strong, but they have avoided many of the clown-show errors that have hounded City. 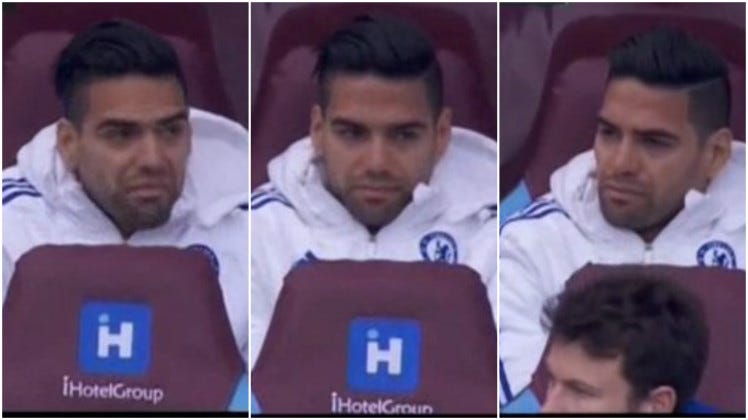 So what we are looking at here is two teams that like to get forward and two sometimes-leaky defenses. On the other hand, first legs of home-and-homes are traditionally cautious affairs. Tough call on which wins out thematically. If there is an early goal, say in the first 8-10 minutes, this one could finish with 8-10 goals scored. I think “reticence” will end up winning the day though. People paying attention may be tempted to jump on those humongous Monaco odds given recent results… can’t say I’d blame you to be honest but I’m going the other way. My guess is it will be a closely fought game that has one-goal win written all over it but Raheem Sterling will revert to his diving ways and win an undeserved penalty in the 89th minute. City to win 3-1 and head back to Monaco with a not entirely justified two-goal advantage.

He forgot to fall down. Won’t happen again.

These two clubs faced off in the Round of 16 two seasons ago in a matchup that was eventually decided in PKs where The Other Madridistas squeaked out a win. Neither club has looked as strong this season as they did that time around, and both will be missing some key players due to injury or suspension (Bayer’s CB Jonathan Tah and MF Hakan Calhanoglu; Atleti’s CB Diego Godin and RB Juanfran). Atleti hasn’t been winning as much this season as they have in years past, but they also rarely lose games, making them a hard club to pick against in a competition like UCL where Diego Simeone has had the magic touch. I think they have a good chance of advancing but am going with the upset on a goal by hot-like-fuego Chicarito… Bayer to win 1-0. 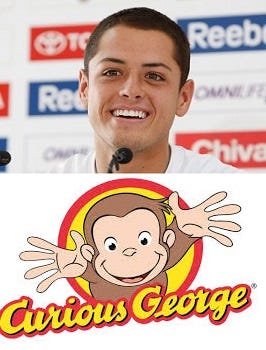 Boom, by far the briefest soccer blog in the history of me. But wait, still got more Champions League coming tomorrow to ensure that you don’t have to spend your whole day doing actual work. #Blessed

As a parting gift, here’s a glimpse of the single most Chicarito-y goal ever scored (he’s like a slightly more Mexican Pippo Inzaghi):