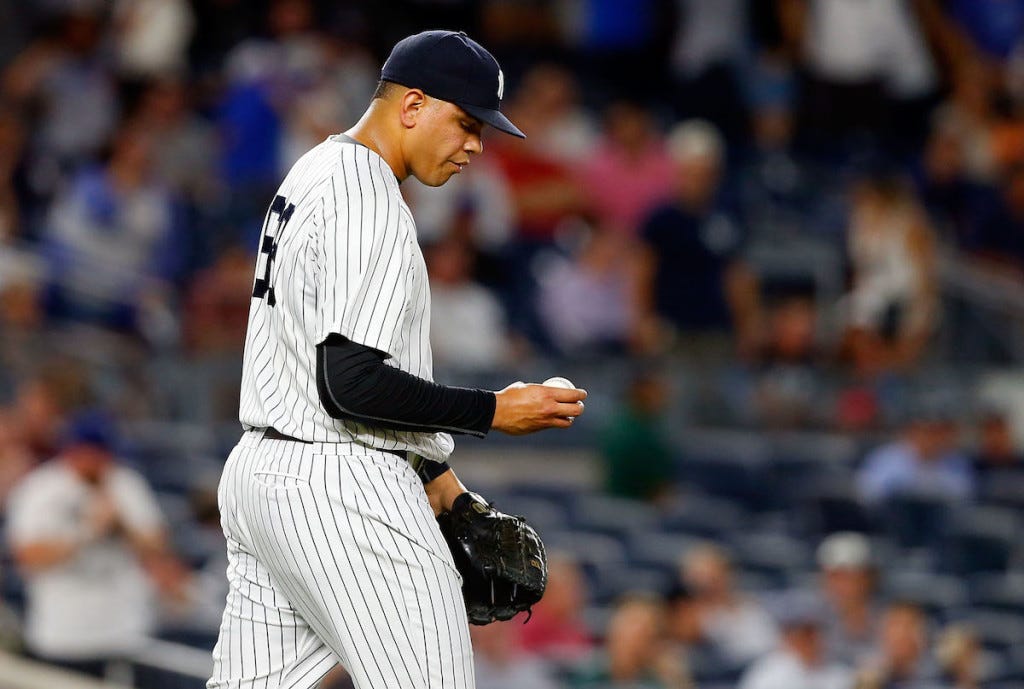 This is exactly why you do whatever it takes to avoid actually going to arbitration with one of your own players. I’m not trying to be a dick, because I’m a Red Sox fan and this is a negative story about the Yankees, but I have to use the Red Sox as a model here. Since their current ownership group took over, they’ve avoided arbitration with every single player since 2002, that was until shithead Fernando Abad broke that streak this past offseason. It blows my mind that teams can’t find a common ground with their players to avoid this awkward and uncomfortable process, especially with their star players. And hey, Randy Levine, just so that you know — Dellin Betances is one of your star players.

This mindset that you have to be a closer to get paid appropriately as a reliever is already outdated. Andrew Miller is not the Indians’ closer. Neither is Darren O’Day in Baltimore. Same thing goes for…Dellin Betances in New York. You would be a complete fucking asshole to try and use the argument that “$5 million goes to elite closers” only. Um, what fucking planet are you on, guy? You literally JUST paid Aroldis Chapman $86 million over five years — that’s an average annual value of $17.2 million — to be your closer. You know what Betances was actually worth in 2016 based on his statistical production? $23 million. And the year before that, he was worth $19.5 million, and $24 million the year before that.

And, by the way, he doesn’t have the stats? HE DOESN’T HAVE THE STATS?! Write this down, Randy. Since Betances became a full-time reliever at the major league level in 2014 — so, we’re talking about a span of three seasons — of the relievers in the MLB who have made at least 100 appearances (he’s made 217), Betances is fifth in ERA (1.93), tied for 10th in WHIP (0.96) with Aroldis Chapman, I might add, FIRST IN STRIKEOUTS! FIRST! With three hundred and ninety-fucking-two strikeouts. Third in strikeouts per nine innings (14.28) behind Chapman and Miller, and FIRST IN INNINGS (247.0). FIRST! He doesn’t have the stats? Fuck you, guy. He has every stat.

I do not blame Betances one bit for hinting that he’s as good as gone once he hits free agency, which isn’t until 2020, by the way. Perhaps these two sides can patch things up by then, but I honestly doubt it. Imagine putting up numbers like that, and then going into a meeting with your higher-ups, only to hear them shit on your entire body of work, just so that they can save a couple million bucks, when they’re a team that was valued at $3.4 billion in 2016, and made $516 million in revenue in 2015. Fuck. That. #TeamBetances #IStandWithDellin

One last point — Betances made $507,500 last year, and this is only his first year of arbitration, so I actually agree that $3 million is a pretty good payday for his first year of arbitration. My beef was solely with Levine’s comments, suggesting that Betances wasn’t worth $5 million because he’s not a closer and that he “didn’t have the stats”, when in reality, he’s one of the best relievers in the game, regardless of what inning he appears in. They easily could’ve met in the middle, as teams often do during this process, and given him $4 million, and all of this could’ve been avoided. Now, the Yankees just pissed off their second best reliever, who’s still under contract for the next three years — theoretically, over one million dollars. This is the Yankees we’re talking about.