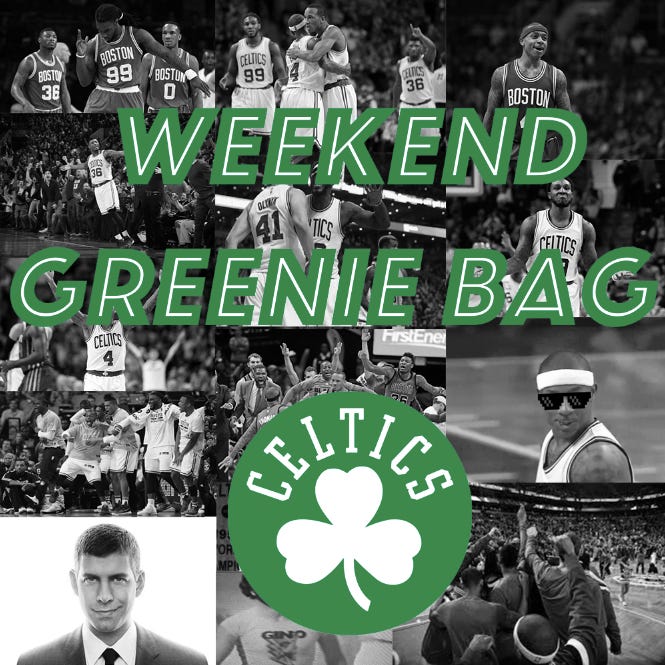 Hello everybody and welcome to another edition of your favorite Saturday franchise the Weekend Greenie Bag! You might be thinking to yourself, “Greenie, it’s the All Star Break, why don’t you enjoy yourself and take the week off? You’ve earned it.” Well, I would argue that with no Celtics basketball for the foreseeable future, the Greenie Bag has never been more important. Also, blog life takes no days off, especially when guys are coming for that Saturday franchise spot. Gotta keep your head on a swivel. Not to mention, it wouldn’t be fair to all the loyal readers who chimed in this week. You guys continue to rule. As a reminder, being part of the fun is easy, just tweet me with #GreenieBag or email greenieceltsbag@gmail.com

Now, to your questions!

Look at what you’re doing to us Ainge. I’m sure Scott here has good intentions, he wants rebounding help, I want rebounding help, we all do. But here’s the thing Scott, I think you’re 100% serious with this question and it probably has a lot to do with the 15/8 he just put up against our less than intimidating front line. I’ve seen this type of shit happen against the Celtics frequently enough to know not to buy into it. So officially I am saying no, I will not be getting on the Robin Lopez train, here’s why

2. I have little interest in another 7fter who averages less than 7 rebounds a game. We already lead the league in that category.

3. He doesn’t fit the system. We heard Ainge talk this week how he is looking for a skilled big. Lopez is a lot of things, but I wouldn’t exactly call him that.

This goes for his brother as well, hard pass.

Michael if this does in fact happen, I’m all for ignoring the real reasons the Celtics would have blown home court and instead go back to a random call in the middle of the season. And I will say this, if it does happen again I don’t think we’ll be the only two ready to make such a decision.

To quote an original member of the Brady 4, “I am prepared to do something I will regret”. Or something like that

You would think 40 games of 20+ points in a game would be enough to get some respect? Especially when only 16 other players have done so in NBA history (12 HOF and the non HOF are TMac, Kobe, Durant, LeBron). However, I still have people telling me that he is not legit. One of the newest criticisms I heard was that he wouldn’t be as good if he played for a Western Conference team. Well, I did the averages out and Da Gawd averages 30.3 PPG 6.3 APG and 2.5 RPG in 21 games against teams in the West. So I’m asking, when is the little guy going to get the respect that he deserves? – Anthony

Full disclosure: I did not write this email and change the name to Anthony.

Anthony, I’m going to go one step further, because the West is filled with dogshit teams once you get past the playoff ones which I’m sure an Isaiah hater will probably say when looking at your numbers. How does he stack up against the top 7 seeds (since the 8th is trash)? Well….

The notion that Isaiah is having this type of success because he plays in the East is simply the latest example of people grasping for straws. They were wrong about him and are having a tough time accepting reality. I feel bad for those people.

I’ve seen this floating around too, and while I understand why (people need to talk about something, especially at trade deadline time), but I also disagree. I think the last month of not having Avery has made people forget how ridiculous his season has been, and how important he is to this team’s success. Now that’s not saying Marcus can’t help fill some of those holes, or that he hasn’t been playing fantastic basketball filling in, but a 15 or so game stretch is a little weird for me to make that type of conclusion.

The main thing I hear is the reason Avery is expendable is because he can’t stay healthy. Despite missing at most 6 games in 3 of the last 5 seasons, he’s been labeled “injury prone” and the Celts are better off cutting ties and going with Smart. Well I have to ask, does nobody remember the fact that Marcus Smart played 67 games his rookie year, and then 61 last year. If Avery is considered injury prone, why isn’t Smart?

Crazy seeing James actually play well. As a fellow member of the James Young hype train, it’s been a great week. But with both Avery and Jaylen allegedly returning after the all-star break, will the Next Big Thing aka the Future of the Franchise, James Young, just go right back to his role on the bench while the Batman to his Robin continues to tear up 4th quarters and the Celtics keep rolling? Gonna be sad seeing such a true hero waste away on the bench again and eventually depart Boston via a trade or free agency. Someway or another, James Young NEEDS to be FREED. – Mark

Mark, I can’ sit here and tell you this wasn’t perhaps the best week of the entire season for me. Seeing James Young not only play, but have four consecutive SOLID performances made my heart explode with joy. He was even getting fourth quarter minutes and didn’t fuck up!!! This was the ultimate “I told you so” week for all of us who have never even considered giving up on the #FREEJAMESYOUNG movement. If this wasn’t validation I don’t know what is.

Now, the bad news is yes, as soon as everyone comes back there is no chance James sees the floor. My biggest fear is he showed TOO much and now Danny is going to trade him. You could tell me the Bulls want to flip Jimmy Butler for him and after this week I’d believe you.

All joking aside, I can at least go to sleep knowing that he really is an NBA player. This stretch showed what consistent minutes can do for a young player’s confidence, and you can’t deny it, Young looked like he belonged.

What are the chances the Celts makes a move for Andre Drummond? The spry 23 yr old is a rebounding machine and a beast on the defensive end – a perfect fit next to Horford at the stretch 4. With Detroit openly shopping him, is he worth a look? and if so, what would you offer Motor City for the big fella’? – Evan

If you put any stock to what Ainge said on T&R this week, I’d say 0.0%. While he single handedly solves all your rebounding problems, there’s no chance Ainge wants to pay the price it would take for a player I guarantee he thinks doesn’t fit the system.

Defensively you’re right, he’d help anchor a defense that at times can go to sleep, and would certainly cut down team’s OREB, but the problem is on the other end. The most important thing for this Celtics team is space, it is their lifeblood, and nobody ruins that more than a player like Drummond.

It’s impossible to pick “all time” favorites because there are too many, so instead I’ll answer who were probably my most influential non Celts growing up

1. Allen Iverson – The GOAT of non Celtics for my generation in my opinion. I remember waking up every morning during that PHI/TOR playoff series, running downstairs and getting a little ink under my fingernails to see how many points Iverson dropped. He was the definition of MUST WATCH.

2. Dan Majerle – First non Celtics apparel I ever had as a kid growing up was the original Majerle Phoenix jersey. Young Greenie was convinced if a white guy with the same name could make it in the NBA, he could too. What a fucking idiot.

3. Reggie Miller – If you didn’t have that poster as a kid where he was taking a jump shot in the clouds, I feel sorry for you

2. Porzingis – This may seem sacrilegious to say, but if you don’t love Porzingis you have a huge dump in your pants

How did you feel about Lamelo Ball’s 92 pt performance? Personally it really rubbed me the wrong way, especially his dad saying he “unleashed him” which appeared to mean tell him to cherry pick the whole second half. Also wasn’t a fan of his team fouling their opponent every possession just to get the ball back in Lamelo’s hands for more points. Seemed like a major marketing ploy and I’m not a fan of doing stuff like that with teenagers in general.

The second question I have is about Lonzo… he plays on the west coast so I haven’t gotten to see much of him but from what I’ve watched I can’t help but think there’s no way that jump shot works in the NBA right? He can get it off against college players but that weird shot release has to take a little extra time, which NBA level defenders will feast on right? Anyway, love the recaps and go Celts – Jack

Honestly Jack, I could care less what a high school player does in a game, and I never really understood why people get so worked up about it. There probably was some fishy shit going on, and obviously it got him national exposure so you could say it worked. I saw the highlights, and guess what, you and I could score 92 points taking nothing but open layups. Shit like this is jus the norm for basketball in 2017.

Now for Lonzo, I disagree with you that his shot won’t translate. There’s already been a player in the league with very similar form that was a pretty good scorer in his prime. That guy is Kevin Martin

We now shift gears to this week’s Greenie Awards! 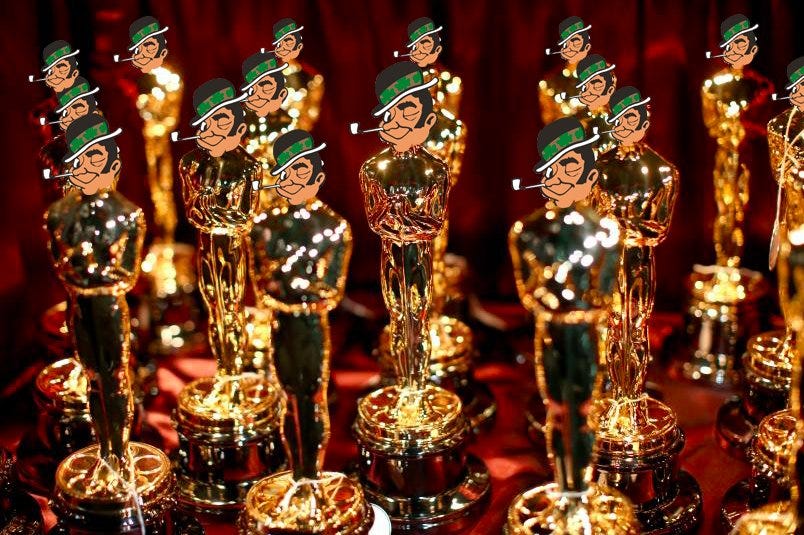 Upset city!! 16 points 7 rebounds 3 assists with 65/61% splits this week will get you this award without hesitation. Who is this guy?!?!

For Marcus, I mean if the NBA is going to rob him of a great defensive contest, he needs to get proper recognition here.

Play of The Week: Isaiah Thomas

He gets the benefit of the doubt with the mask and shit, but his three games this week were virtual no shows. Hurts when your minutes get cut because James Young is dominating, but that should be expected.

And that’ll do it for this week. Six more days until the Celts return, and it’s a big game on the road in TOR. We can make it.

Have a great weekend everybody!