“Don’t do that,” Blow began after McEnany touched his arm and claimed her liberal friends were being unfair. “Don’t touch me and say that’s your ‘sinister motivations.’ That’s not going to happen tonight.”

McEnany said that she would gladly scoot away from him. “You can scoot until you fall off that ledge,” Blow replied. “What I’m telling you is don’t touch me and while you’re saying I’m sinister.”

There are definitely times where I hate getting touched. Guys trying to pull alpha male moves, a girl when she drapes herself all over you on a couch or in bed when you desperately just want to chill, a random person you don’t know thinking they can put their hand on you for whatever reason. But chill back a little dude. She totally gave him a condescending little tap while shit talking, I get that. But there’s no way that justifies the dramatic little hissy fit this dude went on for minutes here. Especially when you’re a prominent New York Times writer. I had to take journalism classes in college and while they didn’t outright say it, I’m pretty sure “Shouting ‘don’t touch me’ on a broadcast when you’re supposed to be a professional and talk about issues” is a big no no if you’re going to be a Big J journalist. Conduct your business like a fucking adult when you’re a person working for one of the most prestigious papers in the planet, blows my mind how this whole political situation continues to make people act like children. Sassy gay black children.

But I’m biased here, mostly because I was very enamored with Kayleigh McEnany’s flawless performance batting back what an asshole Charles Blow was. He was getting angrier and angrier and she kept that “I’m a white lady who’s kind of a bitch and know I’m only going to make you angrier by not giving it back” vibe going stronger and stronger. He’s hoping she breaks her neck falling off the stage and she’s there sipping tea and smiling right back in his face: 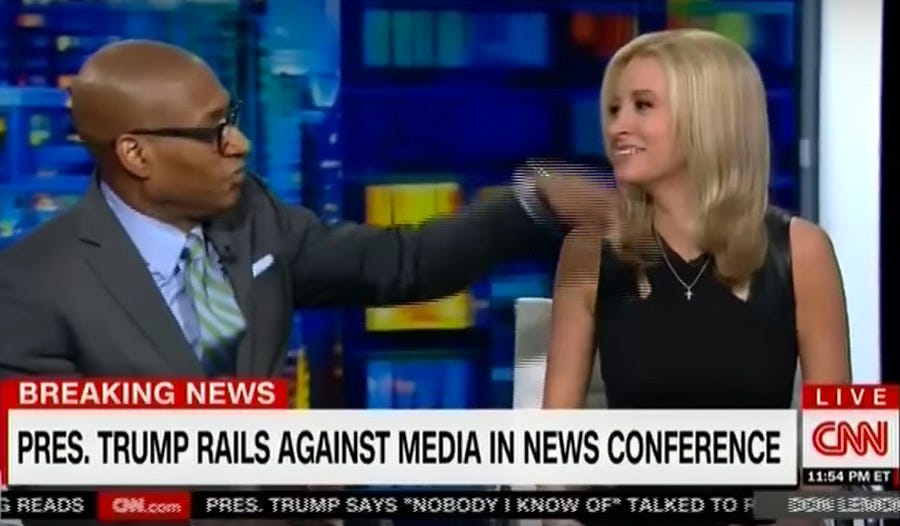 That’s how you win an awkward situation. Love you Kayleigh McEnany.