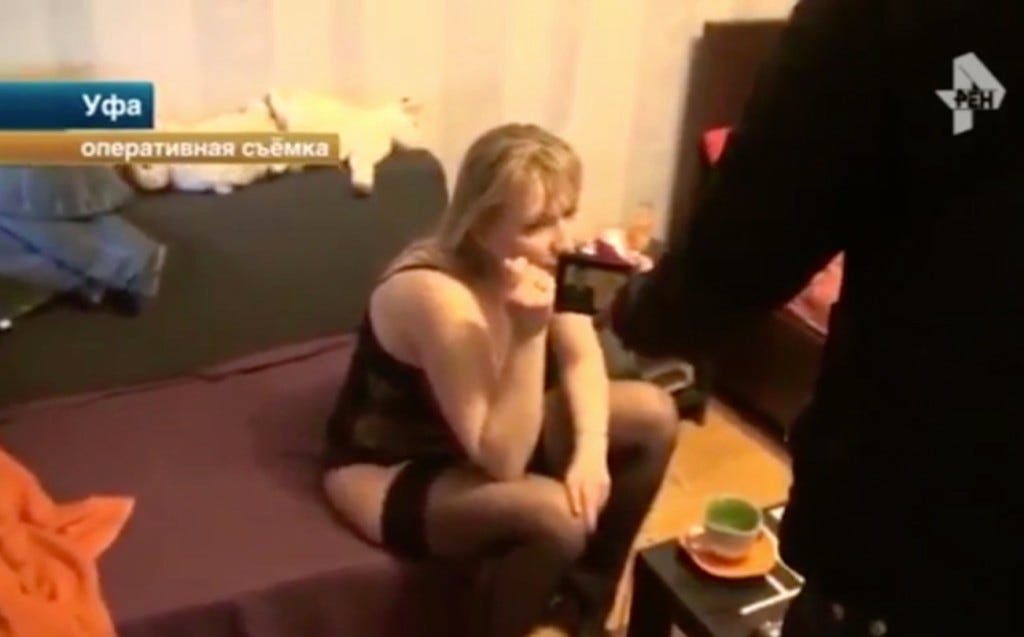 Mirror – A man found out his wife was a prostitute after she was caught on the news being arrested in a raid at a brothel.

Igor Alexeev, from Ufa, Russia’s Republic of Bashkortostan, couldn’t believe his eyes when he saw wife Maria being put in handcuffs dressed in black lacy stockings and a low cut bra.

The dad is now going to court to prevent his wife of eight years from seeing their six-year-old daughter after seeing the sex worker being busted live on TV.

After researching Maria online, he claims he found her price list for various sexual services. He revealed that she charged her clients £200 for a full night of love.

Alexeev has now separated from Maria, winning legal custody of their daughter.

I will go out on a limb and say this: You do not want to see your wife and mother of your daughter busted in a prostitution raid on live television. I mean I admit I don’t know enough about the customs of Bashkortostan to say unequivocally that this is out of the norm there, maybe it’s a rite of passage for a Bashkortostani woman to be outed as a prostitute there. But in general that seems like not only bad news for your relationship but also just a not great way to learn such important news. Kicking back in your recliner with a Russian Bud Light expecting to catch up on the latest stories and all of a sudden you’re seeing your wife not only tits halfway out working as a prostitute, she’s also en route to jail. That is a real downer, I’ll put myself out there and say that.

But I’m genuinely baffled as to how this dude had zero clue his wife is coming home from a life of prostitution, probably for years because one doesn’t simply start to dabble in hooking as a part-time job, and he’s just completely unaware. I mentioned on Swipe Drunk Love before that I’ve dated a stripper previously for a month or two and whenever she would come over after work, she would have to shower within seconds of coming there. And it really wasn’t because she was covered in glitter or semen as much as it was that she felt so gross afterwards, like she needed to separate her life dancing from her life as a human being. And this is a MOTHER who is having sex with countless scummy Eastern European dudes in a depressing room somewhere and she’s coming home to this husband the child and not giving off a single tell? No bleach scent on her breath? I’m not saying this poor husband is Cucks McGee like that dude who lets his girl fuck guys when he can’t hook up with other girls but man you gotta be asleep at the wheel in every aspect of this situation.