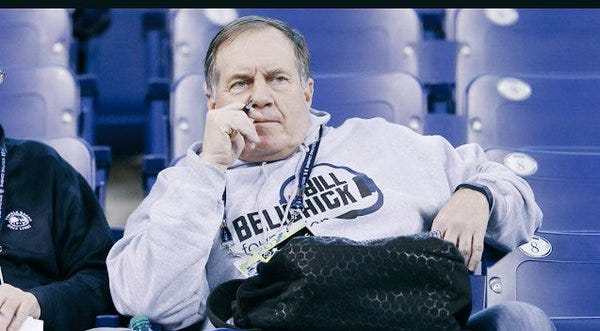 Belichick said right after the Super Bowl that the Patriots offseason program was five weeks behind schedule. That was two weeks ago. Two weeks I’ve spent binge watching every highlight show and furiously pleasuring myself like a bonobo monkey. So my offseason blogging is like seven weeks behind.

In order to make up for lost time, here’s where The Belichick Whisperer sees the club’s priorities. Because as The Hooded One himself says, if you don’t do a good job on your football team in February, March and April you’re probably going to see that in November, December and January. In the blogging world, there are no days off.

The bad news is, the Pats have got key players about to hit the open market. The not so bad news is, so does everybody, every year. The good news is they’ve got the resources to keep the true core guys.

As it stands, the Patriots have $65 million in cap space, with $113 million committed. By way of comparison, the Cowboys have $107 committed … to 7 players. Plus the team is reportedly in talks with Brady to extend him and reduce his hit – $14 million next year and $22 million in 2018 – and free up more. Say what you want about the Patriots “not paying anybody” and worrying too much about the cap. But they haven’t maxed out their credit card since Belichick paid off Bobby Grier’s debts in 2000-2001. Cap management has been the rock upon which the the Church of the Dynasty has been built.

Assessing their free agents in my own order of importance:

*Dont’a Hightower – The key to any NFL player’s career is the coveted second contract. That is where shit gets real for these guys. And for the Patriots, they only give these the things out to the real elites. Gronk. Wilfork. Mayo. McCourty. Chandler Jones and Jamie Collins were sent into exile precisely because the team deemed them not second deal-worthy. Hightower is. He’s come so far from his early setbacks as he made the move inside and seemed lost, to an indispensible, green dot-wearing leader who stays on the field for all three downs and thinks faster than the game is played. They’ve only used the Franchise Tag nine times, three of those on kickers (and they’re not people). But my guess is they’re willing to use the $14-$15 million linebacker tag on Hightower in order to get a long term deal done.
*Logan Ryan – This is a nasty one to handicap, since the market for corners is so volatile. They should love Ryan and want to keep the Rutgers Mafia in the secondary together. But teams go nuts evaluating the position and some GM losing his mind and offering him Richard Sherman money is not out of the realm. It took the Patriots a football generation to get out from under all the Darius Butlers and Wheatleys and Wilhites. And Cyrus Jones does not look ready to step in and make Ryan expendable. So while I hope I’m wrong, I’d bet he’s gone.
*Martellus Bennett – I’m afraid he’s gone. He talked openly in Houston about how champions get overpaid. His brother Michael just cashed in. And he won’t get this shot again. He backed off a little in a Tweet to a Pats fan this week, but I’ll be (pleasantly) stunned if he doesn’t make more money than Gronk next year. And that’ll never happen here.
*Duron Harmon – The third member of the Scarlet Knights Templar, I’m saying he’s seen as more of a product of the system. I’ve seen FA rankings that don’t have him in the top seven among safeties. He’ll re-sign a team-friendly deal.
*Malcolm Butler – He’s not higher on the list because he’s a still a RFA. A first round tender earns him $4 million for next year, a long term deal is worked out and saves us from contemplating a world without the man who made the most important play of all time.
*LeGarrette Blount – He made $1.75 million by hitting all his incentives. He’s also 30. If he tries to get anything more, they’ll send a car down to the Old Running Back’s Home and pick up another guy just like him.
*Alan Branch – He’s on the end of a 2-year, $5.4 million deal. He’s a little weird. Coaches needed to suspend him for a week in preseason, but it got his attention. If he’s willing to take an incentive-laden deal for similar money, he stays.

Free agency is the worst time to be a Patriots fan. It’s the one time you find yourself whining “Why can’t we have nice things?” Other GMs go racing in like the opening of the NYSE to spend crazy money on all the IPOs, and Belichick comes strolling in an hour before the markets close to buy up penny stocks. Then again, that’s how DiCaprio made all his money in “The Wolf of Wall St.” Still, when you’re looking over the list of availables, read they from the bottom up. 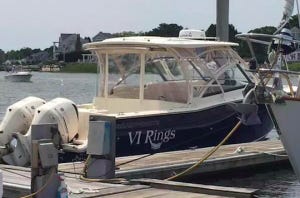 There’s a healthy debate going on right now about whether or not to keep Jimmy G, and I’m firmly on Team Trade. Believe me, I respect the need for a reliable backup QB. I laughed at the people who said his was wasted draft pick and asked them all if they carry a spare tire in their car. Why? You never want to have to use it? Well I don’t want just any spare tire. I want a good one. I won’t buy a car with a donut in the trunk. And I think the Patriots think Jacoby Brissett is a full spare. And Garoppolo has too much value in the trade market to not take advantage of those teams that are a combination of desperate and stupid.

The competition for Jimmy G in the open market consists of Kirk Cousins and Tony Romo. The jury is out on the 2017 draft class. Some scouts have doubts about Mitch Trubisky’s experience, Deshaun Watson’s inconsistency and Patrick Mahomes’ college system. Mike Mayock has DeShone Kizer as his top QB, and the Irish benched him twice in the 4th quarters of games.

It’s a sellers market for Jimmy Garoppolo owners, of which there is one. Especially now, since whoever wins the bid has him under contract for next season. Minnesota gave Philadelphia a 1st and a 4th for Sam Bradford, and they still had to pay $6 million of his salary. Those picks, to me, are the buy in to sit at the Patriots’ table. I’m obsessed with the idea of a 1 and a 4, plus a million in cash, the exact amount they lost in Deflategate. And with the vision of them making the deal during the draft, so that Goodell has to announce it. “We have a trade between Cleveland and New England. … And with the 12th pick of the 2017 draft, the Patriots select …”

It’s imperative. NFL teams can’t swing and miss on too many early picks and stay competitive. The league confiscated your last first rounder. Whatever was eating Dominique Easley cost you your 2014. And until they move Garoppolo, the Pats have no extra picks until the compensatory picks after the third round. So they need their A game.

It’s early in the process and the Combine is still weeks away. And I’ll get into more in March. But sitting here in mid-February, my draft shopping list is, in order:
–Inside linbacker
–Tight end
–OLB/DE (Rob Ninkovich just turned 33)
–Secondary
–Developmental QB
–O-line depth
–Kicker (dare I say it)

They need to get their before Trump resigns because who wants to meet Mike Pence?

Last year they were turning people away on the first Saturday of Training Camp. Next July, the crowds will be double.

Priority 8: Be sure and get that written invitation to the Thursday Night Kickoff Game off to the commissioner.

Registered mail. We need to know that he got it when he’s a no-show.