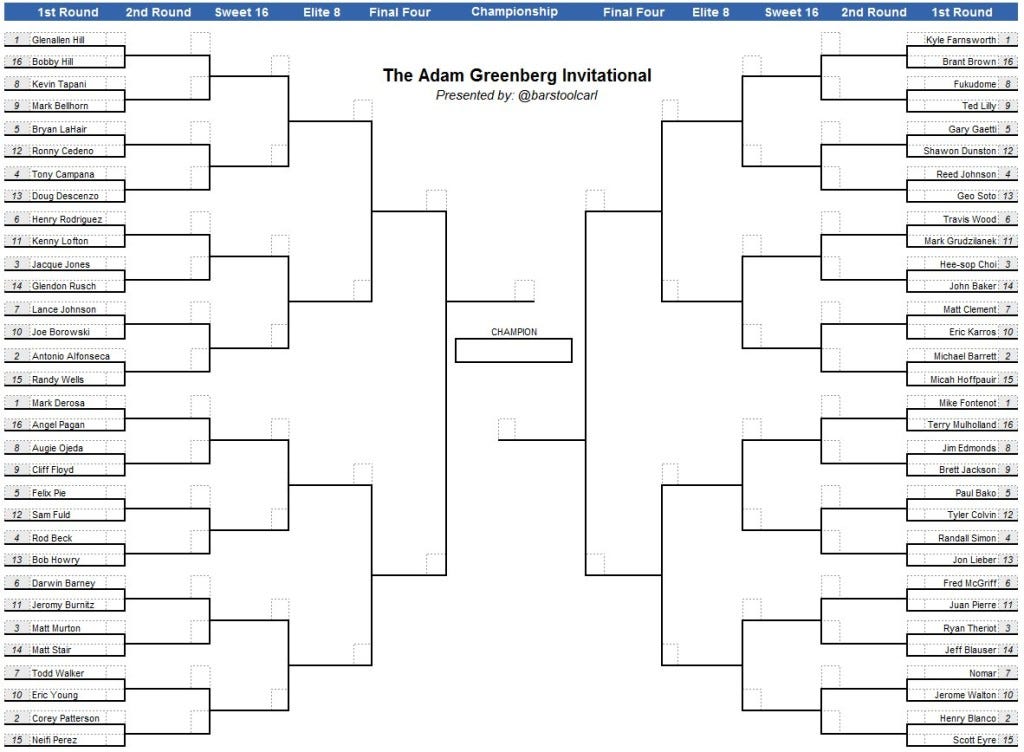 People have been calling this the El Tournamento De Diablo. Others have called it the single greatest 64 team single-elimination tournament ever. Personally, I’m going with The Adam Greenberg Invitational, and I’m happy to invite you to participate.

Go ahead. Fill a bracket out = http://challonge.com/Adam_Greenberg_Invitational

Some background: I was devastated to hear Travis Wood signed with the Royals. Not trying to be dramatic, just #honest #facts. So I turned to Twitter in a time of need:

And that generated 167 responses of some classic names. Names I hadn’t thought of in 10+ years. Names I hadn’t heard in 20 years. It was like being transported back to my childhood, watching WGN day baseball in the summer. Listening to Harry Caray announce names backwards while Mark Grace pounded a carton of cigarettes in-between a doubleheader. The good old days, long before people cared about health or steroids.

Now, normally I don’t get 5 responses to a tweet much less 160 fucking 7. So, with engagement levels peaked, I did what any god fearing, red blooded american degenerate gambler would do. I turned the responses into a tournament. I tracked the names submitted and came up with the power rankings that ultimately became the seeding for this tournament.

Again, you can fill out a bracket here = http://challonge.com/Adam_Greenberg_Invitational

So with that said, here’s what you need to know about the Adam Greenberg Invitational:

Why Adam Greenberg? This is a tournament to remember the guys that you probably shouldn’t remember in the long run. Again, just being honest here. You will find no hall of famers in that bracket. A handful in the hall of very-very-good, yes. But the majority consists of players that will long be forgotten sooner rather than later. So who better to carry that torch as the namesake than the player who never got a chance to establish his obscurity alongside Matt Murton in 2005?

In all seriousness, Adam Greenberg is probably the saddest professional baseball story in my lifetime that doesn’t involve a Dominican killing himself in a Lamborghini at 160mph. He had all the makings to be a 2 seed in this Tournament. He’s 5’9… hits and throws lefty… 9th round draft pick out of UNC… big OBP and stolen base threat… jewish… good defender. All the stuff you love in your 4th outfielder on the northside of Chicago. Unfortunately, the above 91mph heater to his skull bone would bring concussion and vision problems that basically ended his career.

What is it? A 64 man tournament. The players in each round with the most votes advance to the next round. I am not explaining that any further.

Voting will begin next Monday so you have until then to fill out your bracket. A caveat – results will obviously be determined by the voting demographic, so the more you share this with your peers, the greater the chances your opinions will be rewarded. Make sense?

Voting Criteria: We’re trying to determine the most relevant but obscure player from recent Chicago Cubs’ past. The guy that makes you say I fuckin LOVED that guy, but then you go back to forgetting about him as soon as the words leave your lips. Maybe it was Glenallen Hill’s 700 foot homerun onto a rooftop. Maybe it was Rod Beck’s mullet and arm swing. Or Kyle Farnsworth throwing 105mph, blowing a save, then washing it down with 20 beers at Murphy’s afterwards. I don’t know. Just vote for the guy you think is more deserving of being remembered. Trust your gut.

Schedule: Round 1 will go down on Monday and Tuesday of this week. I’ll have the twitter polls open 48 hours for each round. Then I’ll take Wednesday to post the results, and then open up the polls again for Thursday and Friday. We’ll repeat the Sweet Sixteen and Elite Eight next week, and then breakdown the Final Four on my first podcast with WhiteSoxDave (Red Line Radio coming in March). That’s the general plan, and it’s subject to my discretion 100%.

Winning Prize is a pair of tickets to opening day or another agreed upon game. I’m fronting the cash on that until I can find a sponsor who wants to drape their name all over the bracket and maybe throw some product my way in the process.

Rules: I’m not registered with the Illinois Gaming Commission so excuse me if I’m a little thin on rules, but the plan is to give a pair of opening day tickets to the winner. The winner will be the person with the most correct picks. If there are ties, I’ll flip a coin or throw a dart or something. In typical Barstool Sports fashion, we’ll cross that bridge when we get there.