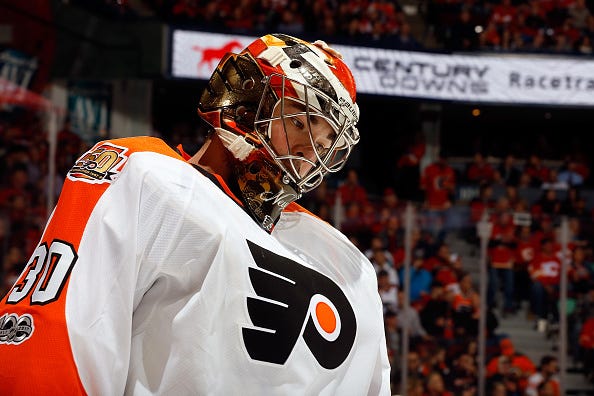 I wake up in the morning, roll over to my right, see the Flyers’ face and just feel disgusted. I have lost all interest in them. There’s no spark in our relationship anymore. We are in an empty, loveless relationship and we are just fooling ourselves into staying together for the kids. So we put on a good show, sure. We try not to fight in front of them but sometimes it’s impossible to resist the urge because the Flyers love to just push push push away at all of your buttons and insecurities and turn you into this monster that you don’t remember ever being and then blame you for overreacting as if they aren’t the sole reason you’re acting that way in the first place. Sometimes it feels like a chore just to be in the same room as this team. But I just fantasize about what life will be like when the season is finally over and pray that one day it’ll all work itself out in the end. But as of right now, I am almost certain that life without the Flyers would be better than this.

Last night they lost their 4th game out of their last 5. And in those 5 games they have scored 0 goals, 0 goals, 1 goal, 2 goals and 1 goal respectively. So if you’re some sort of math nerd and can add that all up without a calculator, you’ll see that they have only scored 4 goals in their last 5 games. A truly abysmal performance and every single person in that organization should feel ashamed of themselves. This is the least exciting team to watch in hockey. I truly mean it when I say it’s a chore to watch these fuck heads. It gives me anxiety all throughout the day when I know they have a game later that night. ESPECIALLY when they’re in Western Canada and have 9:30 puck drops against Calgary last night, 9pm puck drop against Edmonton tonight and then a 10pm puck drop in Vancouver on Sunday. Fuck this team straight to hell for 1) sucking balls and 2) making us stay up late just to watch them suck balls. And I’m not some old man who can’t stay up past midnight (don’t fact check me on that one). But the fact of the matter is that Flyers games have become so boring that you could start the game at 11am and it would still be an incredible accomplishment to stay awake for all 3 periods.

I can’t remember the last time I was truly invested in watching a Philadelphia Flyers Men’s Professional Ice Hockey game. Maybe the Alumni Game back on January 14? Maybe that 3-2 shootout win over Washington right before Christmas? These games are just impossible to get into right now because it never feels like they are in them. I swear it says that the Flyers are playing but the puck drops, a bunch of random shit happens in between, and then the game ends with the Flyers usually coming away with the L. That’s it. They don’t get themselves going offensively. They don’t get themselves going defensively. Other than a Bellemare scrap last night, they don’t get themselves going physically. They’re just a boring team all around. So yeah. Only a couple more months until the season is over and then we can try this thing out again next year. Also–you’ll never see me run with the crew who is constantly looking to strip Giroux of the C. But he’s the most forgettable player on the roster game after game. Aside from losing key faceoffs, I never even notice him out there. Christ I hope he figures it out soon.

– Nicky Cousins managed to own beach front property inside the minds of the entire Calgary Flames organization last night. Which is weird on the Flames’ part to let a 3rd liner get under their skin that match. But anyway, I’m assuming that they were butt hurt over Cousins selling this Chiasson spear which led to Chiasson getting 5 & a game. But if you run the clip back, the linesman caught the spear before Cousins even had a chance to react so embellishment or not embellishment, that was getting called.

Of course he sold it a little. Nick Cousins is a little weasel and that’s his job to play that role for this team. He’s an energy guy and turning into a pretty good pest. To be perfectly fair, he did get hit in a weird spot which is going to elicit at least some sort of a physical reaction. Guy isn’t made out of steel or anything. But yeah. Chiasson pulled that move with the linesman about 2 feet away. Do I think he deserved to get tossed from the game for it? Heck no. But the Flames should direct their anger toward the linesman then and not Nicky Cousins. Also, put some of the blame on Dennis Wideman for that call.

– I thought Jordan Weal played a really solid game all around last night. Kid is playing with a ton of energy and, pun obviously intended, a ton of wheels. Think he had at least 6 shots on goal last night and if anything, he at least provides some jump to this roster. I can’t say the same for about 20 other guys.

Anyway, Flyers play in Edmonton tonight at 9. I’m sure the entire city of Edmonton will be out in full force looking for Brandon Manning’s blood. But Brandon Manning never does anything unless it’s after the whistle because he’s a rat so who knows what we’ll see out of him tonight. All I know is that I have an early day tomorrow and I’d much prefer prioritizing sleep over the Flyers now. Actually, I’d almost prioritize anything over the Flyers now.