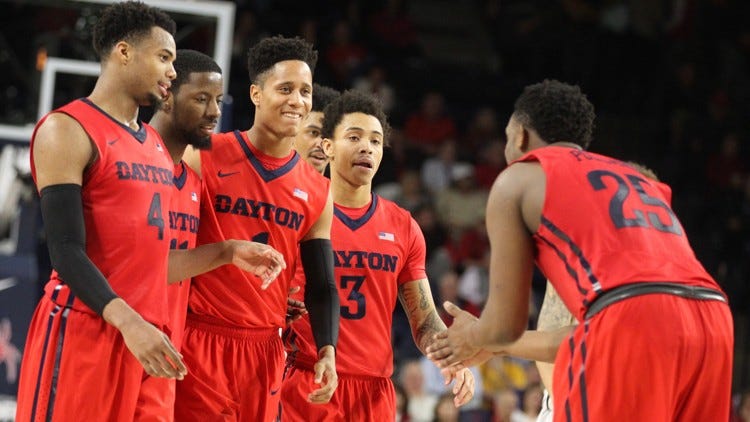 When you think of ‘tough’ in basketball, you often think of guys that finish in the paint and are a pain in the ass to deal with night in and night out. When I say this is the toughest group of college basketball players in the country, I mean it from a stance of teams don’t experience what the senior group at Dayton has.

Two seasons ago Dayton played with seven scholarship players after head coach Archie Miller kicked a couple players off the team and advanced to the Round of 32 in the NCAA Tournament. Last year Dayton’s best player was forced to miss half the season due to sexual harassment allegations. They made the NCAA Tournament. This season they had to deal with their expected starting center dying at 20 years old from a heart problem. If that wasn’t enough two of the other bigs suffered injuries early in the season? This group is now in position to make the fourth NCAA Tournament in a row.

This group of Kyle Davis, Scoochie Smith, Kendall Pollard and Charles Cooke has seen it all. They are all completely different players, but really come together and make the perfect group for Archie Miller – and the main reason why major schools want to get him away from Dayton.

In talking to someone on the Dayton staff, the true he made sure to go out of his way to talk about Kyle Davis. The other three guys are well known and are extremely talented. But, it’s Davis who the staff knows they will always show up. While he doesn’t demand the ball or looks to attack as much as he could, he’s hit game-winners against VCU for the A-10 championship last year. He also hit a game-winner against Miami of Ohio last year. But, more importantly it’s his defense that the coaching staff raved about. They pointed out the game against Providence a couple years ago where the gameplan was to let Davis guard Kris Dunn with ‘normal defensive principles, nothing special.’ Dunn ended that game with seven turnovers.

See, Dayton continues to be one of the quietest successful teams in the nation. Outside of that run to the Elite Eight in 2014, people seem to forget how consistent they are. From that year through last year, the Flyers have averaged 26 wins per year and made the NCAA Tournament each season. This year they are already at 20 wins and are projected to win four of the last five. What’s even more impressive – but seems about right for this resilient squad – is they were able to shake two bad losses (Nebraska and UMass) to put themselves firmly in the NCAA Tournament picture. Again, this is all based on their defense, which the coaching staff prides itself on.

Dayton grades out as excellent on defense per Synergy by giving up .814 points per possession. According to KenPom they rank 24th in the country. But, what makes their defense so good is the ability to force turnovers, especially steals/live ball turnovers which result in easy run out points. With guards like Smith, Cooke and Davis, this team is made to run and wants to turn defense into offense. That’s a Miller family trait. The Flyers force steals on 11% of possessions, which is good for 29th in the country. This is especially true in the pick and roll sets that teams run against Dayton. It’s no surprise after spot up shooting this is the second most set the Flyers see. Here’s the numbers that jump out. Dayton forces turnovers on 27.2% of those 294 possessions while allowing a score just 29.6% of the time. That’s completely ridiculous.

What makes their pick and roll defense so intriguing is they don’t necessarily do the same thing each time. They will change how they hedge or switch on screens. It all depends on the two guys involved and that’s what makes this defense go. I want to show a couple clips of this happening. Against URI, the Rams bring Kendall Pollard up to try and attack him off the pick. But, watch how he shows, keeping his shoulders completely square to the sideline, forcing Terrell back towards the screen or away from the hoop to where Cooke can recover.

Then against St. Louis, Dayton switches the ball screen, as they stay under, leaving the screener, who isn’t a threat to shoot out at the top of the key. It’s plays like this that help Dayton be successful, especially in the NCAA Tournament. College teams love to run the pick and roll. Taking that away shuts down a lot of the offense.

I do want to focus on Kyle Davis, after watching his defensive tapes based on what someone on staff told me. The fact that he’s just 6’0″, teams want to try and attack him either in ISO sets or pick and roll sets, hoping to pin him with the screen. Neither are good options. He’s giving up a combined .5305 points per possession in those sets, grading out as excellent in both. What makes him great, especially in the ISO set, is his athleticism. He’s quick enough to stick in front of guards, but he can also jump. Watch this clip where he blocks a midrange jumper:

Then here’s an example where a team will try to bully him with size. He’s guarding LaSalle’s Jordan Price here. He doesn’t fall for the in and out dribble Price uses, instead Davis forces him down to the baseline. He continues to slide, cutting off the direct path to the rim from there, before Price tries to bully him. This is where Price makes a mistake and Davis shows how good he is. Price shows the ball in this situation. After keeping his hands up the entire play, Davis finally swipes at the ball. Game over.

If you’re just getting into the season, do yourself a solid and turn on a Dayton game. There’s no team or group in the country that has gone through as much shit as these guys and they are incredibly easy to cheer for (unless you’re an A-10 team or Xavier fan.) This team is starting to find its rhythm and is getting another key piece back with Josh Cunningham, who played 23 minutes against St. Louis.

The A-10 is no doubt down this year, especially with URI not living up to the hype it had in the preseason. But, Dayton is currently tied for the lead with VCU, while they still have VCU at home this year. They aren’t going to be a 5 or 6 seed, but if Dayton is a 7 seed, this will be one that people look at a little more careful. That run to the Elite Eight was special, but there’s no doubt if there’s a group that can do it again from a smaller conference it’s Dayton. They have truly seen everything.