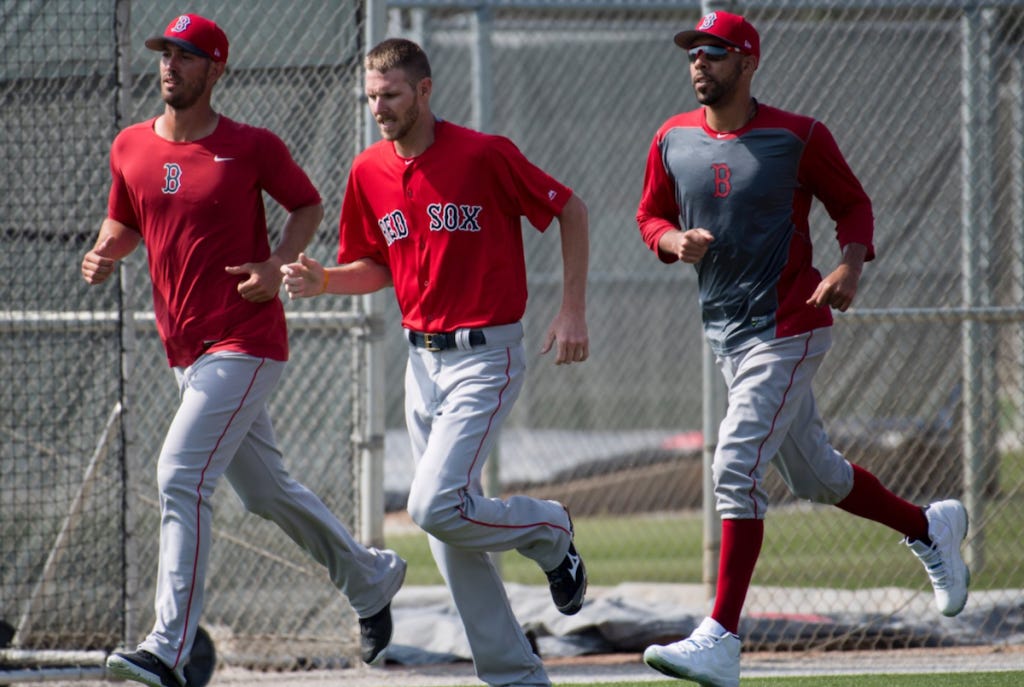 It’s the first Red Sox spring training without David Ortiz since 2002, but that doesn’t mean that there aren’t a ton of storylines for this 2017 team heading into the season. Last year, I went through the entire team’s storylines, and it ended up being longer than the Bible, so I’ll do it piece by piece this year. Without further ado, let’s dive right in to the storylines of the 2017 Red Sox rotation:

Chris Sale — This is undoubtedly the biggest storyline of all, simply the fact that Chris Sale is even here. But then you get over the shock that he’s here, and you start to ask valid questions. Questions such as, will Sale fall victim to the year-one in Boston curse. It’s not even a curse, really. Curses are stupid, and they’re all just made up bullshit. The year-one struggles in Boston are well-noted, and they’re legit as hell. Go down the list — Josh Beckett, Pablo Sandoval, Carl Crawford, David Price, and Rick Porcello just to name a few in recent years. Not everybody has it happen to them, and not everybody actually recovers from it (cough, Edgar Renteria, cough). I’ve seen plenty of people compare Sale to Beckett, given their similar attitudes and intensities on the mound. It’s a fair comparison, and Beckett had some pretty great success in Boston, but not before he sucked in his first year. Will Sale fall short of expectations in his first year in Boston? Also, plenty has been made about his delivery, his body type, and how this combination will cause health problems for him in the future. Will Sale be able to avoid any major injuries?

David Price — There’s a common misconception about David Price’s first season in Boston. It didn’t suck; it was just very disappointing. Here in Boston, if you fall short of expectations, you suck. That’s just how it works on our scale. After signing a record $217 million deal, the bar was set incredibly high. Even if you don’t factor in the money, and just set your expectations based on his past performance, he still fell very much short of where fans’ expectations would’ve been. Price underachieved during the regular season, had stretches where he looked good, but never really dominated. Then, after joking about how he was saving all of his postseason wins for the Red Sox, he got lit up in his lone postseason start against the Indians this past October. Was this a case of the first-year in Boston failures for Price? Can he return to being the Cy Young caliber pitcher that he was in the year before he came to the Red Sox? Will he ever turn his postseason misfortunes around?

Rick Porcello — The reigning Cy Young award winner; this one’s pretty simple. Who is Rick Porcello? I know he’s not the guy that we saw in 2015. He’s probably not the guy we saw in 2016, either. Or maybe he is? I honestly don’t know. The thing about Porcello is that media people (fucking Felger) took the sample size from earlier in his career when he was 20-24 years old, and said this is what he is. When in reality, you could argue that he was still developing as a pitcher as recently as last year, his age-27 season. We’re really only finding out what he is right now, and he’s yet to perform at a consistent enough level for us to get a grasp on the type of pitcher he’ll be heading into his 30’s. Me personally, I think he’s somewhere between who he was in 2014 and 2016. I think, when healthy, he’s more than capable of giving you 200 innings, and an ERA somewhere between 3.20 and 3.50. That’s not quite what he was last year, but that’s still one hell of a season for a starting pitcher, if he can be that. Can Porcello come close to what he was last year, repeat it, or even exceed it?

Eduardo Rodriguez — This one’s gonna be interesting. If you recall, the Orioles coughed up six years of control of Eduardo Rodriguez for about two and a half months of Andrew Miller. Seemed fishy. Coming into last season, Rodriguez was talked about as being a No. 2-type starter. Maybe not to open the year, but he had that kind of ability. One year later, the conversation is shifting towards, do we have another Clay Buchholz on our hands? That’s meant in the sense that we have another young, once highly touted pitching prospect with a ton of ability who is unable to stay healthy, and when he’s healthy, his performance is very much inconsistent thanks in part to issues like pitch tipping. It’s a valid question, especially since Rodriguez has now been in the Red Sox organization for parts of three years and has yet to break out. Instead of breaking out, he kind of just breaks. Last month, Dave Dombrowski said that Steven Wright and Drew Pomeranz are “penciled in fourth and fifth” in Boston’s rotation. Where does that leave Rodriguez? Turning 24 in April, time is still on his side, but it’s going to be another uphill battle for him in 2017, just as it was a year ago. Can he rebound and become the pitcher that he was once hyped up to be?

Steven Wright — People forget that Steven Wright was the only pitcher from the Red Sox rotation to make the All Star team last year. Who knows what Wright’s season might’ve become had John Farrell not idiotically used him as a pinch runner in LA against the Dodgers, resulting in Wright diving back to the bag headfirst and injuring his shoulder, an injury that apparently he’s still recovering from. I don’t know how the fuck that’s possible, but we’re gonna roll with it. He’s out of contract options, which is how he ended up in the rotation last year, and that will also play in his favor again this year. Wright hasn’t thrown off a mound yet this spring, but he’s still on schedule to get a routine amount of appearances in spring training if he progresses normally. All that being said, what can we actually expect from Wright in 2017? The knuckleball in and of itself is completely unpredictable, but you mix in the fact that Wright is a 32-year-old with zero full major league seasons under his belt, and what can you really expect? Nothing, right? Anything impactful that you get from Wright is a bonus, no? We’ll see!

Drew Pomeranz — I don’t know why the Red Sox are committing to the idea of having Drew Pomeranz in the rotation to start the season. Well, I do know why, but the reasoning is stupid. They traded their top pitching prospect for him, so they want to maximize the return on that deal so that they don’t look dumb for trading their top pitching prospect for a relief pitcher. I get it. But he made 13 starts for the Red Sox last season, averaged 5.1 innings per start, and pitched at least 6 innings just five times in those 13 starts. He was basically just a relief pitcher that started the games. Might as well just stick him in the bullpen, and use him in spots that actually make sense. Not only that, but he hasn’t thrown off a mound yet this spring either, and had friggin’ stem cell injections in his elbow last October. That sounds terrific. Are the Red Sox inevitably going to regret this Pomeranz trade? Can Pomeranz actually be a decent starter in the American League? Will he end up back in the bullpen? Will he even be healthy enough to contribute and make a noticeable impact on this year’s team?