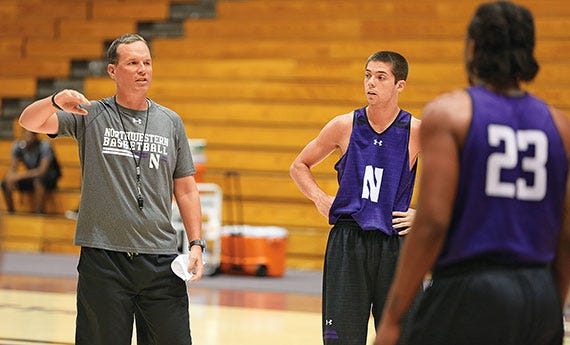 ‘Is this finally the year?’ That’s something every Northwestern fan has said year in and year out. The Wildcats were always the laughingstock of the country when it came to March. Every year they found a way to miss the NCAA Tournament.

Bill Carmody won 20 games a couple times but would struggle in B1G play. They would lose games to Penn State at home. They never finished in the top half of the conference. You have to go all the way back to 1968 to find a year Northwestern finished in the top-5 in the conference. Ironically enough the only other season since then they finished .500 in the B1G was in 2003-04 when they finished the season 14-15 and missed postseason play.

Not this year though. This year this team is different. And it started with a simple hire when Jim Phillips hired Chris Collins, with no head coaching experience following the 2012-13 season. He was an assistant coach in the WNBA for a year, Seton Hall for two years and finally at Duke for 13 years. He was loyal to the school that gave him a chance to play and to Coach K for grooming him to be a head coach.

More importantly it instilled that winning culture. Something he was more than vocal about from the day he was hired. The other thing Collins learned from Coach K? How to be a real motherfucker and I mean that as the ultimate compliment. Almost instantly four players left the team – Kale Abrahamson, Chier Ajou, Aaron Liberman and Mike Turner. Collins was different than Bill Carmody or anyone else in Northwestern. He didn’t care. He wanted to win. He was willing to piss these kids off in order to get the best of them.

Now, there’s also the Johnnie Vassar situation. He was part of the ultimate recruiting class for Collins (listed here in a few), that ultimately left Northwestern and filed a lawsuit. His lawsuit is against the NCAA for the transfer rules, but it did shed light that Collins and staff berated him in front of teammates and that he was transferring because of ‘a campaign of harassment, pressure and deception.’

That brings us to the first recruiting class and ultimately today. That group? Vic Law, Bryant McIntosh, Gavin Skelly, Scottie Lindsey. This group of juniors (or redshirt sophomores) is the reason why Northwestern is ‘gucci’ when it comes to the NCAA Tournament. As long as they don’t completely implode down the stretch they will be there for the first time ever and Chris Collins will continue to look like the heir apparent to the Duke throne. He looks made for it personally.

I want to focus on the three players that make this team what it is. Law, Lindsey and McIntosh. Mostly on Law and McIntosh due to Lindsey being out for some extended time right now with an illness. Law was the important target in that recruiting class. He comes from Chicago and St. Rita’s High school. He was a different type of player than Northwestern was used to. He was athletic, talented and could play for a school better than Northwestern. It was rare to see that happen.

Law is the third leading scorer on this team putting up 13.5 ppg while shooting 43% from three. He missed all of last year with a torn labrum. What he does though is kill you in the spot up game and in transition. This is where his relationship with McIntosh has been important. McIntosh is one of the better penetrate and kick guys in the B1G. Having Law on the wing, allows Collins (a guard by nature) let his offense play to the strength. Here’s a play that shows exactly that in the recent win (biggest win in program history) against Wisconsin. They are the horns set before using Law as a screener to allow McIntosh to get into the paint. From there, well, just watch:

Defensively, this team will kill you. They rank 24th in the country giving up 94 points per 100 possessions while ranking in the 94th percentile in the country just allowing .814 points per possession. Again, the leader of this defense? McIntosh. The kid from Greensburg, Indiana who is an extension of Collins on the floor. Hell, even off the floor he’s a motherfucker. He’ll tell you exactly what he’s thinking and he doesn’t care if it pisses you off. I love that about him or anyone that has that thought process. He was pissed Indiana passed on him, so he lets them know it. He grades out excellent defensively, giving up .726 points per possession on 159 possessions. He’s the second most-attacked player on the roster behind Law. Teams try to throw him in pick and rolls, which isn’t smart. He forces turnovers on 16.7% of those possessions while allowing a score just 32% of the time. McIntosh (and Northwestern) fight through screens incredibly well. More importantly the helpside defense knows where to be as well as evident by this turnover in the Ohio State game:

So now here we are with Northwestern as they head into probably the most important home game in program history. A win against Maryland tonight all but seals the NCAA Tournament. In fact they could start making a push to a No. 6 seed with a win. Perhaps more importantly though the school is buying into the basketball program. They are about to embark in a $110 million renovation that will modernize the arena, offices and practice facility. That gives Collins even more of an ability to recruit kids from Chicago – something that we’ve seen another school in Illinois struggle with recently. There’s also the fact that this team will have another year together as no one is expected to declare early.

People ask me quite a bit about Collins and potentially leaving. I don’t see it happening. This is good practice for Duke. It’s a private school, with strong academics. It’s in a power conference and while the expectations aren’t there the burden of getting to the first NCAA Tournament is there just as he’ll have the burden of replacing Coach K. I’d be willing to bet that he takes over for him. So until that job opens up, be prepared to see Northwestern succeed.

So, yes, Northwestern fans. This is finally the year. The first year of more to come.