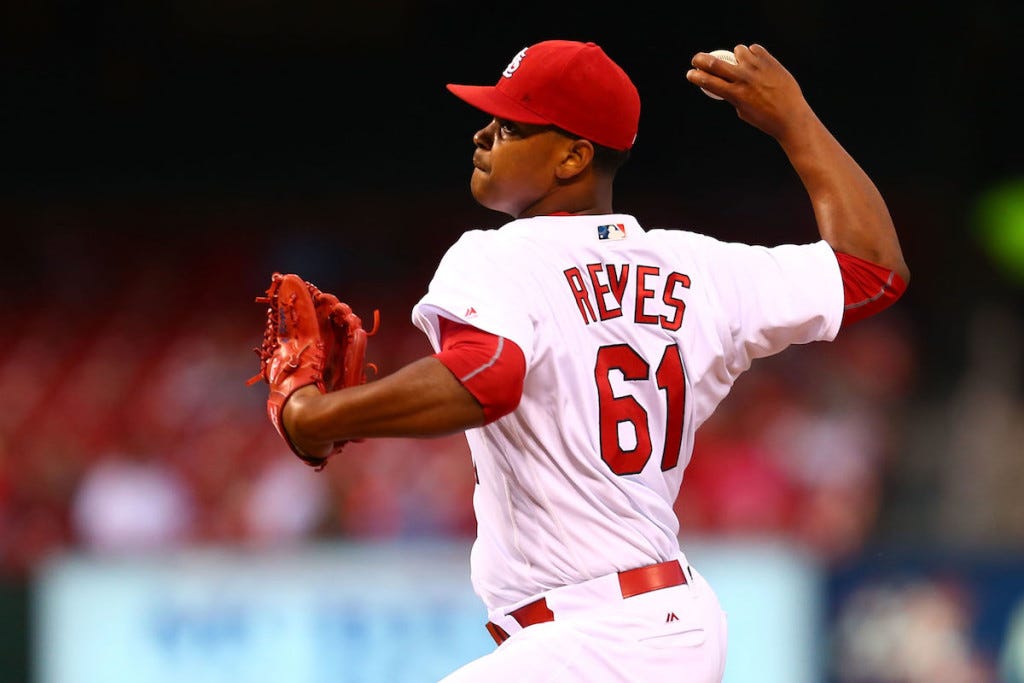 Tough blow for the St. Louis Cardinals here, as they’ll lose their No. 1 prospect, Alex Reyes, for the entire 2017 season, who almost certainly would’ve factored into their major league roster this year.

Whether or not Reyes would’ve been in the rotation or in the bullpen was yet to be determined, but judging by the impact that he made last year, it’s safe to say that he would’ve been a valuable piece to this 2017 Cardinals team. Last year, Reyes appeared in 12 games for St. Louis, five of which were starts, and recorded a 1.57 ERA and 1.22 WHIP with 52 strikeouts in 46 innings. The walks were a bit of an issue (23), but it’s important to remember that last year was only his age-21 season.

That makes this injury all the more frustrating, because, as Jeff Todd points out, the Cardinals not only lose a year of development for the young righty, but they also lose a year of service time, meaning that, despite missing the entire year recovering from Tommy John surgery, 2017 will still count as a year of control used up, making him one year closer to free agency. Sucks, but that’s the way it is.

Prior to the injury, Reyes had a legitimate chance of cracking the Cardinals rotation, but now they’ll have to rely on Michael Wacha, who was battling right shoulder issues towards the end of last season, and had an ERA of 5.09 in 2016 after posting an ERA of 3.21 over his first three major league seasons. Right now, it’s looking like it’ll be Adam Wainwright, Carlos Martinez, Mike Leake, Lance Lynn, and Wacha. But even if Reyes were healthy, that still could’ve been their rotation regardless, given that Reyes’ velocity would make him a force in that Cardinals bullpen.

Reyes only appeared in 12 games at the major league level last year, but he averaged 98.27 MPH with his fastball in August, and 96.88 MPH with his fastball in September, with a max velocity of 101.97. In those 12 appearances last year, Reyes threw 793 pitches, 496 of which were fastballs. Of those 496 fastballs, 212 of them (43%) were 97 MPH or higher, and he hit triple digits 11 times. Unfortunately for Reyes and the Cardinals, the harder you throw, the more at risk you are for an injury like this. Here’s to hoping the recovery goes well so that we’ll see Reyes back on a major league mound some time in 2018.