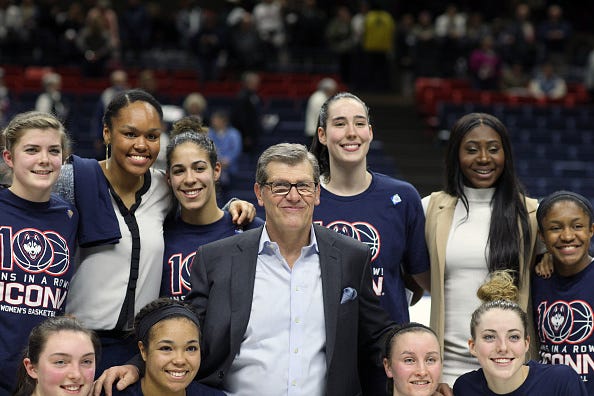 NCAA – It was November 2014 when UConn last lost a game. After Monday night’s big showdown with No. 6 South Carolina, it remained that way.

The Gamecocks hung tough throughout the first half, leading for a healthy chunk of it, but eventually the Huskies did what the Huskies do and overwhelmed the visitors en route to a 66-55 victory. The win was notable for being the 100th consecutive for Geno Auriemma’s squad, extending the all-time record into triple digits.

We here at Barstool Sports [dot] com like to think outside of the box. So while most of the world sucks the clits of the UConn women’s basketball team for winning their 100th straight game, we here at Barstool Sports [dot] com aren’t afraid to ask the tough questions. We’re not afraid to get our hands dirty and we’re certainly not afraid to go there. Which is why I must ask–and at the time of writing this, I believe I’m the only person with the balls to ask this–is UConn ruining women’s college basketball?

I mean, think about it. These girls win basketball games. And not only do they win some of the games, but they seemingly win all of the games. What in the fuck is the point of letting women go to college at all if they’re just going to be constantly losing to Geno Auriemma? What’s the point of giving girls scholarships to go receive a college education that they may not have been able to afford without basketball if they are just going to get their tits kicked in by UConn every night? Women’s college basketball is ruined and maybe it’s time to just call it quits on the whole thing. Either that or maybe women’s college basketball just needs enforcers. One or the other. But either way, is a question worth asking and a debate worth having. Just glad I could bring this discussion to the table.

And real talk… this win streak is GREAT for women’s college basketball. It’s kind of like when Ronda Rousey was still only fighting people who just started training a month before the fight. It was an interesting storyline to see someone/some team just DOMINATE the shit out of her opponent. The moment that some parity comes in to play and all of a sudden that draw isn’t there anymore. So yeah, for entertainment purposes the streak is great. And if you don’t think the streak is great, then maybe you should be pissed off at other schools and other coaches for not doing enough to beat Geno Auriemma and the UConn Lady Huskies. Don’t be mad at them for doing their jobs. That’s about as ass backwards as it gets.