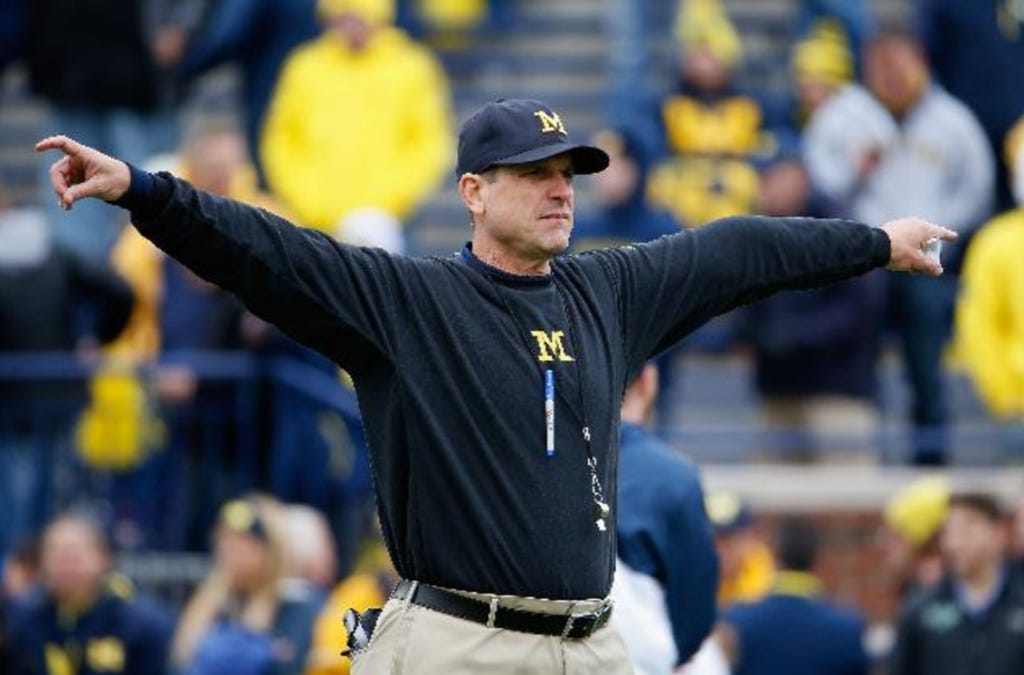 That might not seem like a major move until you see the player that could follow as a result of the hire. Johnson happens to be the father of Michael Johnson Jr., the top dual-threat quarterback in the Class of 2019. The high school school announced the move via Twitter.
The elder Johnson has an extensive coaching background in both the NFL and college ranks. He was the 49ers’ offensive coordinator in 2010, the year before Harbaugh’s arrival there. Johnson also was an assistant at UCLA before taking over at The King’s Academy, where he spent the last three seasons.

So while the focus is on Michigan’s proposed new weight room, Harbaugh is using a subtle recruiting tactic that has worked in the past. Harbaugh hired former Paramus (N.J.) Catholic coach Chris Partridge, which helped reel in 2016 top recruit Rashan Gary. Harbaugh also hired Devin Bush as a defensive analyst in that class, which helped reel in four-star linebacker Devin Bush Jr.

Jim Harbaugh just gonna keep being Jim Harbaugh. He’ll go to any lengths to get his recruits and nothing can stop him. What’s crazy is most of his antics abide by the NCAA Hitler-esque rules in regards to recruiting. To my knowledge the only trouble he got in had to do with those satellite camps he had all over the country, but that’s nothing. Now it seems he’s just hiring recruit’s family members to persuade the recruits to come to the school. He did this with Devin Bush in 2016 when he hired his dad and he’s doing it again here with Michael Johnson Jr. Now you may not have heard of Michael Johnson Jr. yet, but he’s looking like the top quarterback in the 2019 recruiting class. He runs a 4.68 40 and has a fucking cannon for an arm, so this guy is a must have for Harbaugh.

What does Jim do? Hires his dad to the Michigan staff of course. You think that’ll sway the number one recruit’s mind? Dude your dad, who was your high school football coach, is a coach with us you basically have to come here and win us a championship. It’s fucking genius and totally legal.

Snake it till you make it is the phrase right? You can’t beat Jim Harbaugh. It also helps that Michael Johnson used to be the offensive coordinator for the 49ers, but we all know he doesn’t give a shit about his coaching expertise.

P.S. I was told once that Harbaugh was walking through the dorms one day and noticed a player playing Candy Crush. He asked what it was and how to play. For the next four hours Harbaugh sat down with the player and wouldn’t get up until he was better than him at the game. Jim Fucking Harbaugh.