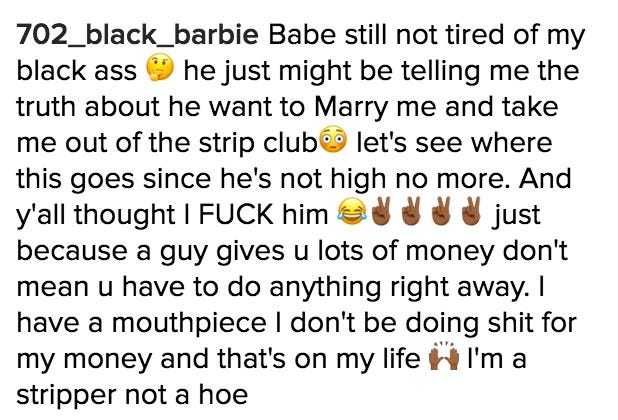 Black Sports Online has the tale of Black Barbie here and says that she claims to be making up to $10,000 a day from mostly older white dudes without ever laying a finger on them. And maybe with some more pics you can see the appeal there for them:

So far be it from me to knock Black Barbie’s hustle here. If these men (or is this just one dude in the ones above? Hard to tell, #noracist against wasteful ugly older white men) want to throw money at her thinking that they can buy their way into her heart after spending tens of thousands of dollars on her at the mall, who am I to tell them no to try? They’re wrong and full of bad ideas but I also haven’t bedded many curvaceous Black Barbies so who am I to question their approach? Even if it doesn’t work for them, it seems to be working for her:

Look down on this guy wasting money, call this girl a hoe, whatever, but if you’re a chick whose job is to use your body for money and you’re driving around in a hot pink BMW that says “Pay Me” on the back, you are simply crushing it. She’s practically a Warren Buffett of strippers from what I can tell. If I’m another girl out there trying to get paid off nothing more than my body and guile, I’m doing whatever she does and following her to the ends of the Earth. Putting the “pro whore” into “a prophet whom you should respect,” that’s what this is.