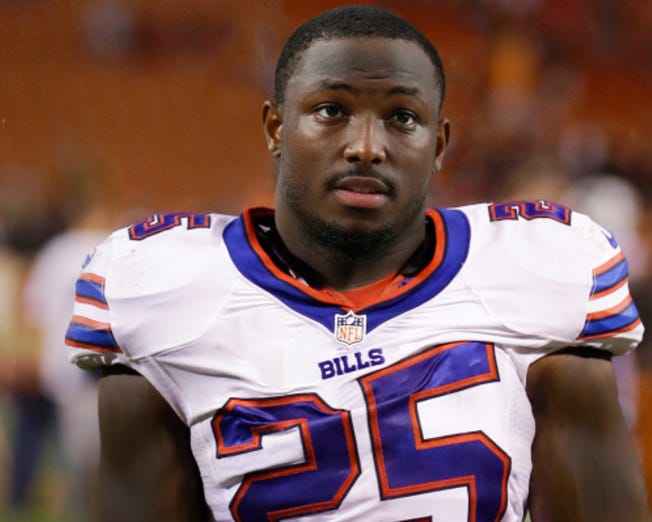 PFF - LeSean McCoy ended the season with 1,267 rushing yards and 13 touchdowns on the ground, while also adding 356 receiving yards and another touchdown. He had without a doubt an excellent season, but fell short of the 101 list by a narrow margin. The single biggest thing that kept McCoy out was his performance as a blocker. This may seem like an insignificant thing for a running back, but in today’s league, backs need to be able to pass block, or their quarterbacks are in trouble. That’s why rookie runners often don’t see the field in passing situations, and it’s why complete backs are still such a valuable commodity — they can be trusted to keep their QBs upright.

Yo, @PFF, Shady has a message for you:

Yeah! That’ll show ‘em. ProFootballFocus is also the suckiest bunch of sucks that ever sucked.

In Shady’s defense, I can see why he thinks he deserves to be on the list, even if does block like a turnstile. Anyone who had the unfortunate pleasure of watching the Bills this season knows their offense ran through McCoy. The PFF list features unsexy players the likes of lineman T.J. Lang and Eagles guard Brandon Brooks (really?) at 86. It’s one of the few rankings out there that doesn’t favor flash over substance. It’s not a debate McCoy is one of the top 15 dangerous guys with the rock in their hands. Still, that doesn’t discount the blatant immaturity from McCoy to attack a bunch of “Nerds” for not including him in a pointless list. And on top of that, if you’re gonna attack at least come out with firepower greater than what you see on a school yard. Or just expose them all to the Herp. Shady’s done worse to better.