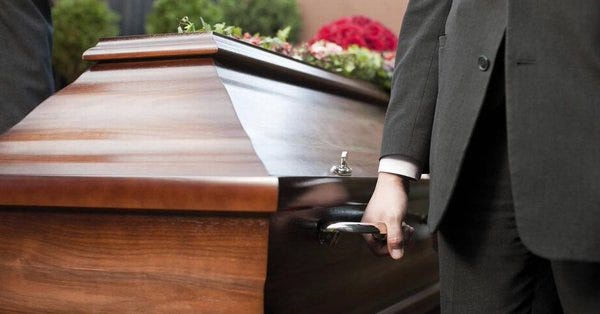 “Leslie Ray ‘Popeye’ Charping was born in Galveston on November 20, 1942 and passed away January 30, 2017, which was 29 years longer than expected and much longer than he deserved.”

“At a young age, Leslie quickly became a model example of bad parenting combined with mental illness and a complete commitment to drinking, drugs, womanizing and being generally offensive. Leslie enlisted to serve in the Navy, but not so much in a brave & patriotic way but more as part of a plea deal to escape sentencing on criminal charges.”

“Leslie’s hobbies included being abusive to his family, expediting trips to heaven for the beloved family pets and fishing, which he was less skilled with than the previously mentioned. Leslie’s life served no other obvious purpose, he did not contribute to society or serve his community and he possessed no redeeming qualities besides quick whited [sic] sarcasm which was amusing during his sober days.”

“With Leslie’s passing he will be missed only for what he never did; being a loving husband, father and good friend.”

Leslie’s passing proves that evil does in fact die and hopefully marks a time of healing and safety for all.”

I’ll be honest I clicked on the link of this obituary story and expected something kinda funny. Poking fun at a dead person. “Ha you’re dead, here’s a couple funny jokes about you.” Classic. But instead I read it and it was all this shit about domestic violence and mental illness. Yikes. My only real hope and concern here is that the daughter wasn’t quiet the entire time this guy was alive. That she didn’t bite her lip and then once the old man croaked, published this mean obituary calling him a giant piece of shit. NEED to let him hear it while he’s still kicking.

And a part of me felt bad for this dude getting shit on posthumously… until she said he killed pets. Until she talked about him “expediting trips to heaven for the beloved family pets.” Fuck that. You can be a piece of shit to humans, that’s fine, but the second you’re mean to the family dog you can go right to hell.

A ruthless obituary and a Schrute send off sounds about right.