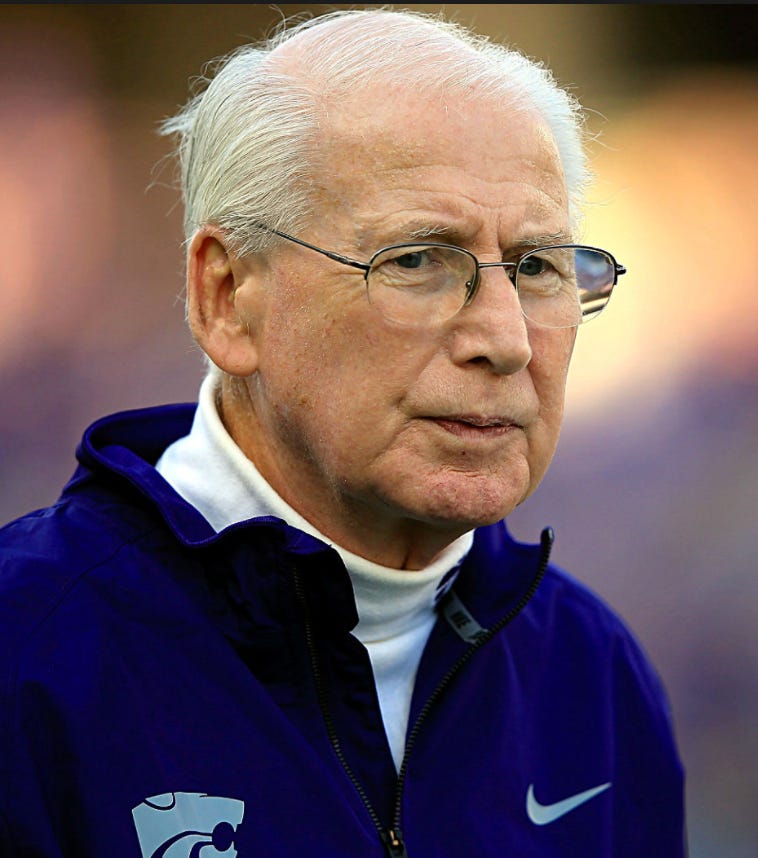 Hall of Fame Kansas State coach Bill Snyder has been diagnosed with throat cancer but is expected to be on the field for the start of the Wildcats’ spring practice next month.

Snyder announced the diagnosis in a lengthy statement Monday, saying that he has been receiving treatment for three weeks and that doctors have “projected a positive outcome.”

“I have been diagnosed with throat cancer and have been receiving outpatient treatment at the KU Medical Center for about three weeks and am getting along very well,” Snyder said in his statement. “The doctors and staffs at both KU Med and M.D. Anderson [in Houston] have been great; working so very well together to finalize the overall treatment plan which is being conducted in Kansas City. Both ‘teams’ have projected a positive outcome and have worked out a schedule that allows me to be in Kansas City for my regular treatments and still be back in the office on a regular basis through the first week of March.”

Horrible, sad news that the legend himself Bill Snyder has been diagnosed with throat cancer. Not the type of thing you want to wake up to, although there is optimism of a positive outcome. Obviously he’s not faking this like someone of recent memory, not naming names, cough* cough* the guy who’s making all these This is Barstool videos. If you don’t like Bill Snyder you don’t have a soul. The man took over K State when they were an absolute laughing stock in college football in the late 80’s. It only took him a few years to turn them into a perennial winner year in and year out. He’s been coaching Kansas State for TWENTY FIVE YEARS. Bob Stoops and Rex Ryan were ASSISTANTS to Bill at some point in their careers. He has the third most wins among active coaches with 202. Sure he won’t be come close to the top of all-time coaches like Saban or Bear Bryant, but don’t kid yourself he’s a legend. The stadium is fucking named Bill Snyder Family Football Stadium for christ sake.

The main reason I’m writing this blog is to question why he’s still coaching through this. The dude is SEVENTY SEVEN years old. You’re going through throat cancer, hang em up Bill! He’s the oldest coach by five years in college football and every year it seems to be a shock he continues to come back to coach. There’s one school of thought that coaching is all he’s ever known to do and without it he’d lose the will to live. Coaching is his life and nothing else matters. And in that sense I get it, but it gets to a point where bro you have cancer and are 77 years old, this is just dumb. Take time to recover, give the reigns to someone else, and go live on a beach for the rest of your life. He has five children and eight grandchildren. Together that makes 13 (Syracuse education math) and those 13 people need to sit Bill down and tell him to retire.

P.S. Searching through coaching ages and going through the oldest guys, Nick Saban is 65 years old? What? I wouldn’t have guessed a day over 55. That was shocking to discover.

Double P.S. Kansas State in 2012 was a must watch team. Collin Klein running the option at quarterback was borderline unstoppable combining for 39 passing and rushing touchdowns. They were 10-0 and #1 in the country before losing to Baylor at the end of the season. Tyler Lockett returning punts and seemingly taking them to the house every time, they were so much fun. Collin Klein was just hired to join the coaching staff of K State just recently and will be taking over for 66 year old Del Miller. Bill Snyder is 77. Please retire dude.