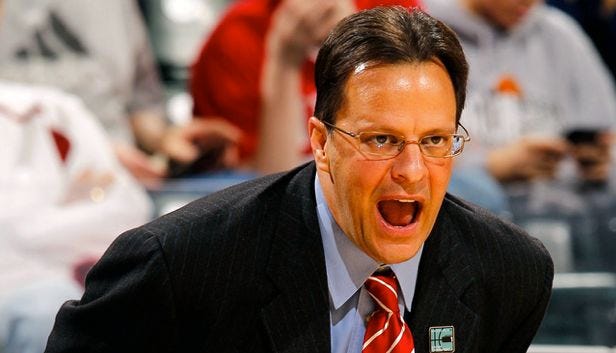 It’s only happened one time in recent memory where a team went from top-3 in the country ranking wise and not make the NCAA Tournament. Indiana is on the verge of doing that this season. After wins over Kansas and North Carolina, the Hoosiers were viewed at as possible national title contenders.

Then OG got hurt. Then Thomas Bryant completely regressed as a player. Then Josh Newkirk continued to play like a backup point guard. Then Indiana turned the ball over. They turned it over some more. Then a little bit more. Seriously, the Hoosiers are terrible at turning the ball over.

Now, they got swept by Michigan – another bubble team. We’ve learned what the committee currently thinks of the B1G, which is it’s not a great conference in their eyes. Wisconsin isn’t a top-16 team and Purdue wasn’t close to it. Those are your two best teams. That spells trouble for Michigan, Michigan State, Northwestern, Indiana and Maryland. They are 5-8 in the conference, with two sub-75 losses on their resume with only Northwestern and Purdue left on the schedule as quality wins.

So with Indiana struggling, fans are instantly saying it’s time to fire Tom Crean. Now, I’m going to speak out of both sides of my mouth when it comes to Crean, but its a little fair to do so with him. It’s a unique situation. He took over one of the blueblood programs when they were a complete shitstorm. He turned the program around a year earlier than most expected. But it’s been one step forward and two steps back. They’ll go win the B1G and the next year miss the NCAA Tournament.

Crean has struck out when it’s come to recruiting. He misses out on keeping guys at home and most big name recruits. However, he was able to turn Oladipo and OG into likely lottery picks. So is it good development? Getting lucky? Or a perfect storm of both?

So with the ‘fire Tom Crean’ crowd. I agree. Indiana has hit the peak it will with Crean as the leader. This is who Indiana is under him. The question is, can you get someone better than him? This year is one of the weird offseasons in terms of coaches. Most of the younger mid-major coaches are a year or two away from being ready for Indiana. Which means there are 3-5 likely names thrown around. I’m not sure why any of them will leave where they are now for Indiana, despite it being a good job. They are as follows:

Chris Mack (Xavier) – This is probably the most common name thrown around and the first call Indiana should make. It’s an interesting scenario because Mack is at his home at Xavier. He grew up in the Cincinnati area, went to Xavier and genuinely loves the school. The fact Xavier is now in a major conference and not the A-10 anymore plays a role here too as does the fact he’s starting to get his best talent to the school. Sure, Indiana can pay about $1M more or so, but is that worth enough for him to leave where he’s from?

Archie Miller (Dayton) – Another common name thrown around here. Archie would make sense to go to Indiana if it wasn’t for two jobs likely to open up. Ohio State and NC State. He has ties to both and both are good jobs. Miller played at NC State and his wife went there. It makes sense to go there. Ohio State – he worked as an assistant coach there. He’s familiar with the area being in Dayton and can easily recruit Ohio. Any other year, this would be a no-brainer, but you have to beat the other two schools in getting Miller there.

Brad Stevens (Celtics) – Listen, this isn’t happening. Sure he can’t beat John Wall this season and there’s that pesky LeBron fella in Cleveland. He’s just not going to leave the Celtics now for Indiana.

Gregg Marshall (Wichita State) – I actually think this is a logical hire on both sides. Personally, I think Marshall would be in line for North Carolina as he’s from the area and would fit North Carolina’s mold. At Wichita State he’s turned that program into a successful mid-major that is similar to Gonzaga. He can butt heads with people at times, but the dude can coach his ass off. Personally, he’d be my pick of who I think Indiana ends up with. The question is do you think he can recruit and coach better than Crean?