DB – Joel Embiid has a torn meniscus in his left knee, according to multiple sources with knowledge of the situation.
The tear was discovered after Embiid underwent an MRI following a 93-92 victory on January 20th over the Portland Trailblazers. Embiid left the game in the third quarter with a left knee contusion after landing awkwardly following a drive to the basket.
There is some thought that the torn meniscus could be a pre-existing condition which an ensuing MRI discovered, rather than caused by the fall on January 20th, although the two injuries being related has not been completely ruled out.
The tear is a low-grade tear and is not expected to require surgical intervention. It is unclear whether the tear is contributing to the soreness and swelling which has kept Embiid out of 11 of the last 12 games, including the last 8 in a row. 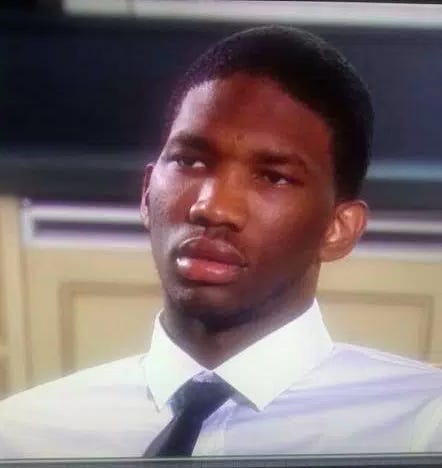 Fuck all of the fucks in the history of fuck. Is it the end of the world? No. Of course not. JoJo will be just fine and dandy when it’s all said and done, but it’s not exactly a good look DIRECTLY after going shirtless and dancing his dick off on stage at the Meek Mill concert. All it does is give the old heads fuel to the fire. “Maybe if he spent less time on the Twitter and more time in rehab this stuff wouldn’t happen. These Millenials have no respect. You know who didn’t dance on stage with a torn up knee? Jesus.” So, way to go Joel. Way to prove them all right.

The sad thing is we probably won’t see Embiid playing NBA minutes for the rest of the year – For good reason. Shut his shit down and get ready for the dynasty.