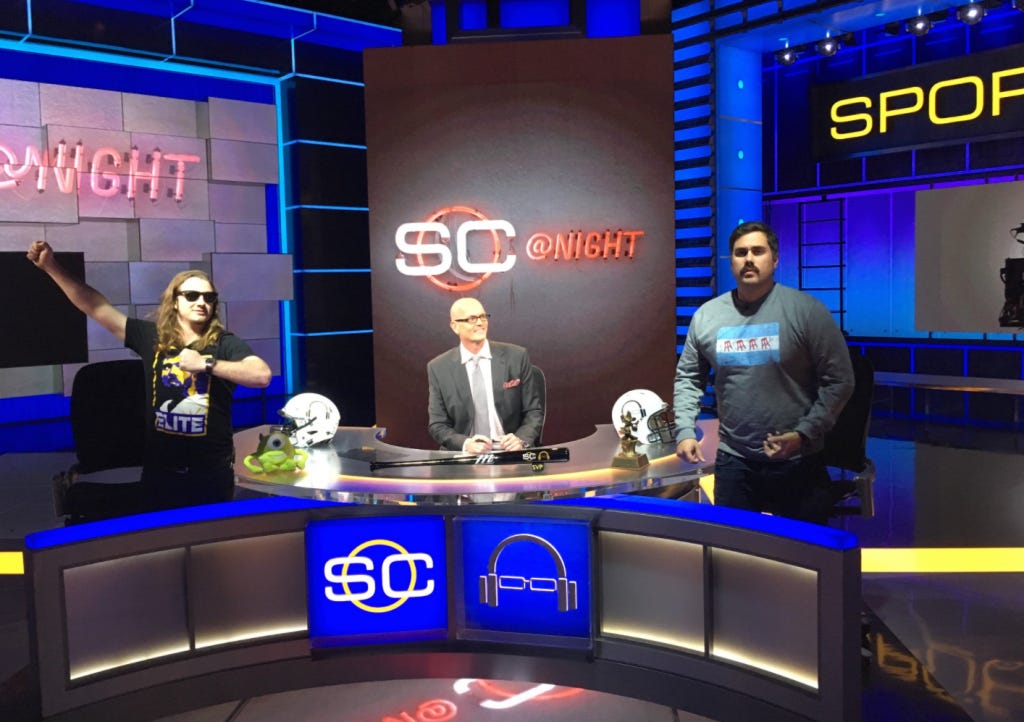 Welcome back to everyone’s favorite feature, the Barstool Office Power Rankings. Took the week off last week for a pretty solid reason – nobody was in the office. I find that that is one of the major keys of ranking people in an office – those people have to actually be there. But with a little something called “The Rundown” on a little network called “Comedy Central” during the week before a little something called “The Superbowl,” the majority of our squad was down in Houston.

And I’d say that whole thing went pretty well, all things considered. I mean if you consider things like a show that beat out Kimmel, Fallon and Colbert late night with virtually zero advertising, hiring an All-Pro player away from the NFL at age 29, getting infinity free publicity by getting banned from media row by Roger Goodell, headlines like WHY BARSTOOL SPORTS IS THE WINNER OF SUPER BOWL WEEK and Own The Moon: Barstool Sports and Why They’re Here to Stay, and so on. All fairly good things. Encouraging things.

Not to mention the best Super Bowl of all time featuring a massive Patriots win that made our Boston guys and fans happy as a cap on all of it. Pretty, pretty good week.

But now everybody’s back and we’re getting back in the groove of normal office life. Had a nice full week – minus a travel day on Monday, and a snow day on Thursday. But 3 out of 5 ain’t bad. So let’s get into it, the main event, the top 5 employees of the week, the people that need a little bit of extra work, and all the highlights from Barstool HQ: 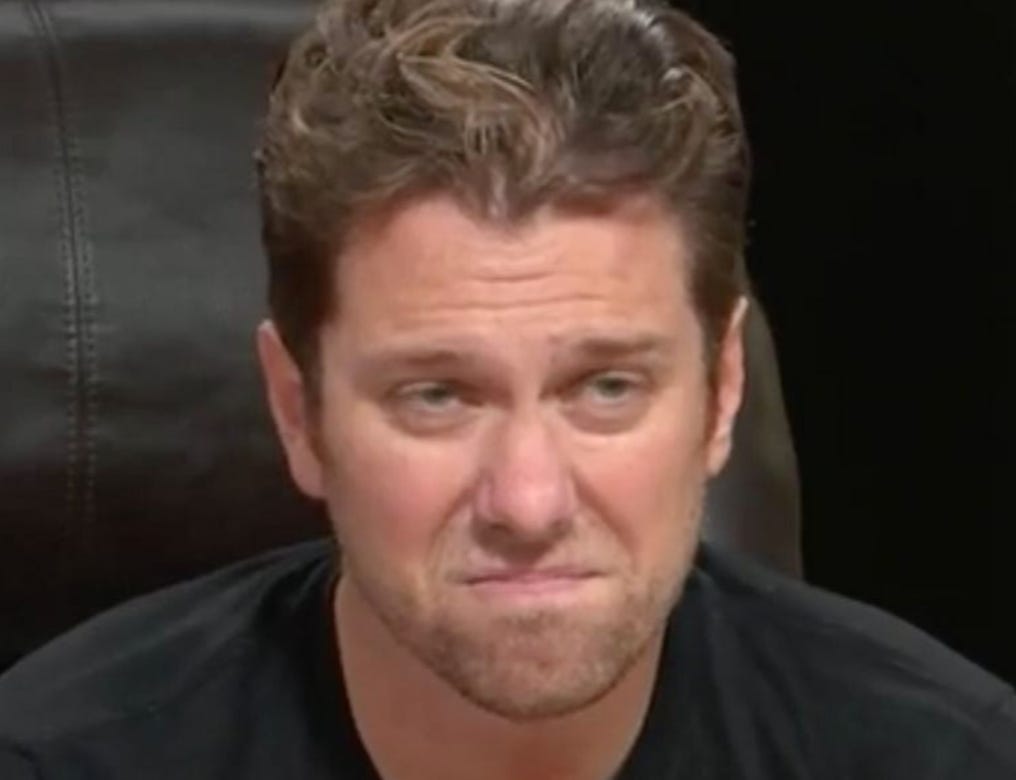 Gets the spot solely for not killing himself this week. For ending the week alive and breathing, he gets the nod. A Herculean effort to not just straight up end his life.

Just watch, a man having his soul snatched out of his body, in tweet form. 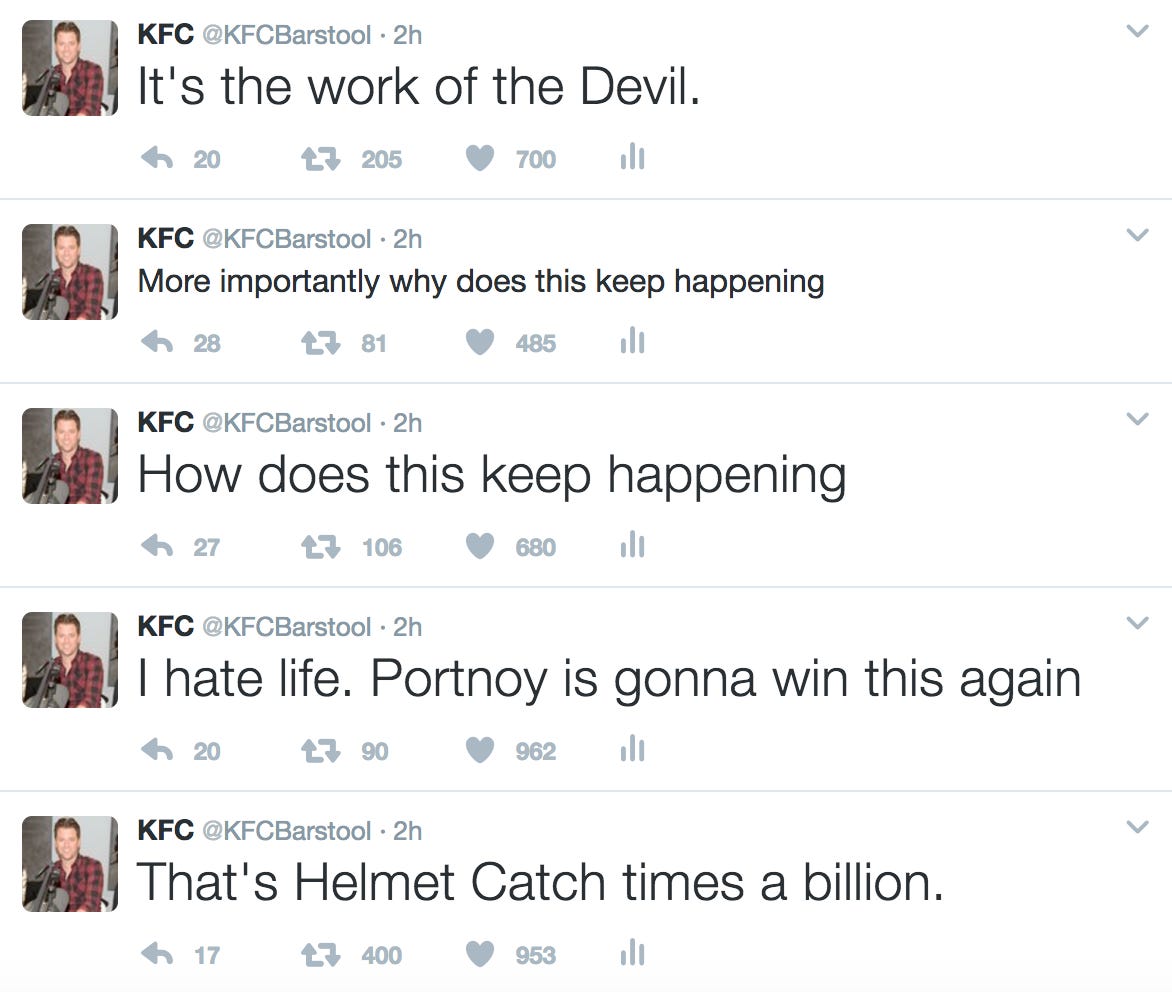 A Shakespearean tragedy if there ever was one. KFC flew close to the Patriots-hating, Portnoy-hating sun and got eaten alive by fate.

And what’s the only, and I mean the ONLY thing that could make it worse?

Is that…could it…is it really… 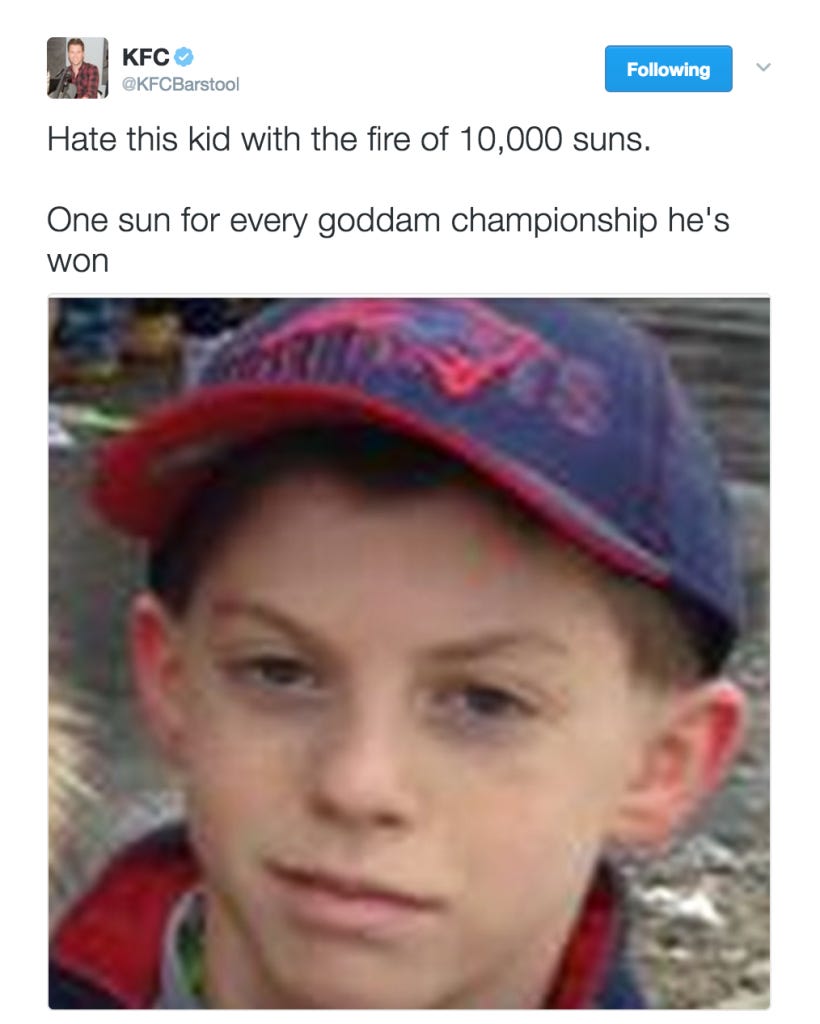 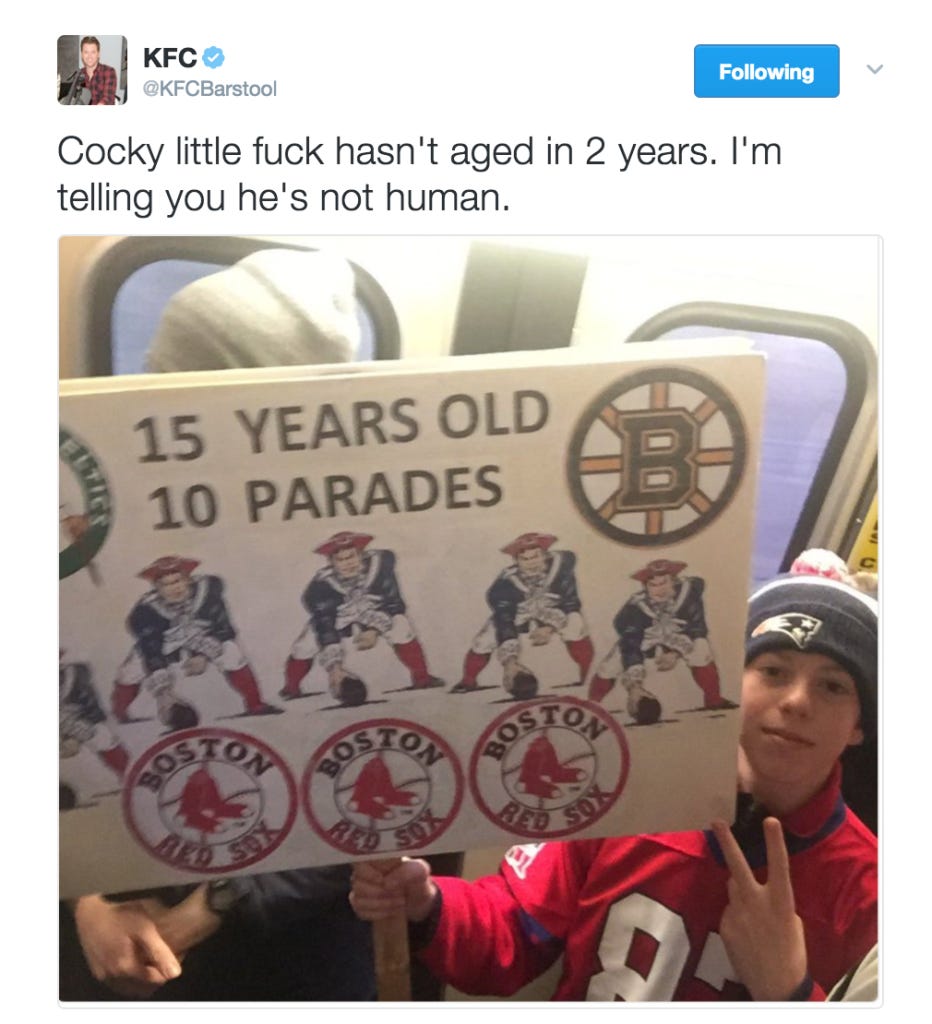 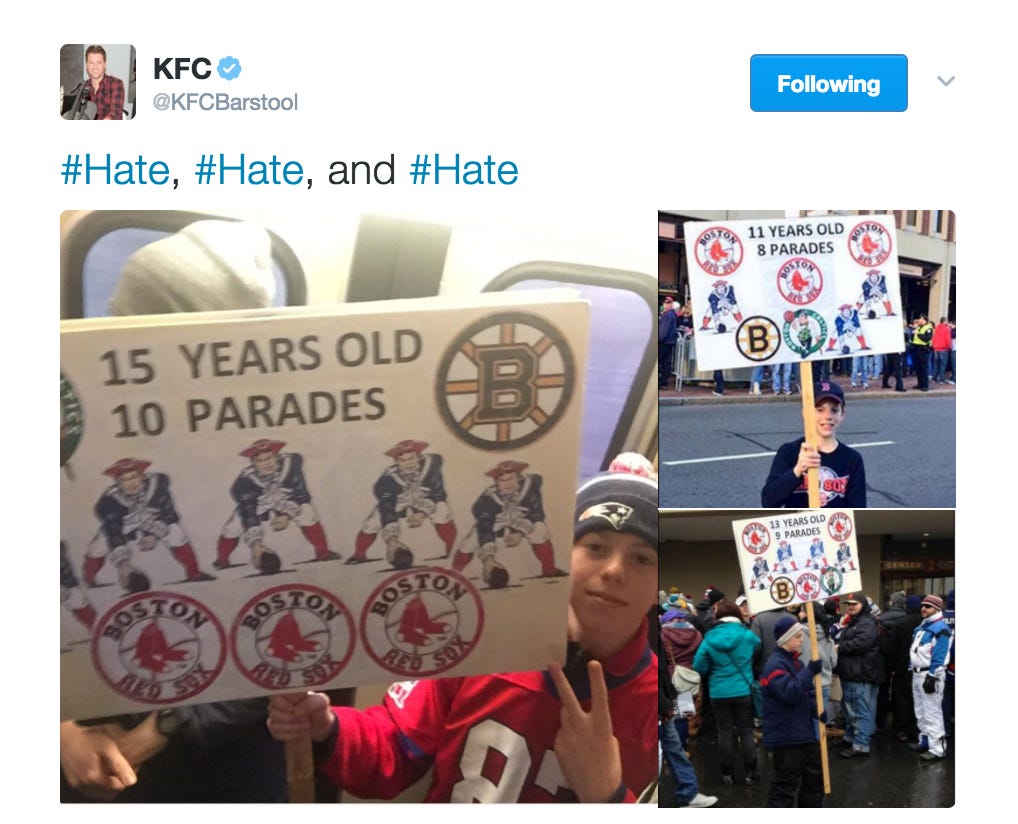 Whatever, at least he got CNN to reference that motherfucker as “Patrick McGillicuddy.” Small victories, take em where you can get em.

Shoutout to the snow for shutting the Barstool office down for the day. Nothing more valuable to an office than a force of nature that prevents you from having to go to it. I mean sure, some nerds and dorks still came in. Not sure what their problem was other than just desperately wanting to be glory me-first guys making everyone else look bad. And sure the NYC subways still work just fine and it’s just kind of a cold annoyance to travel anywhere.

But I showed solidarity with our workers out in the boonies and suburbs who couldn’t get their cars out of their driveway or had their commutes otherwise disrupted by the blizzard. Shout out to me for that too. People forget that bloggers can work anywhere with a computer and internet connection.

Thought we should have a human representative at #4 too so we’ll go with Nate for pulling off what his arch nemesis Smitty said was “the coolest thing he’s done since he’s been at Barstool.”

Don’t know what happened but I load up Twitter one night and the freaking lead singer of OAR is playing the guitar on one our stool while Nate sings duets with him.

Just add it to the list of wild shit that goes down here on a daily basis. 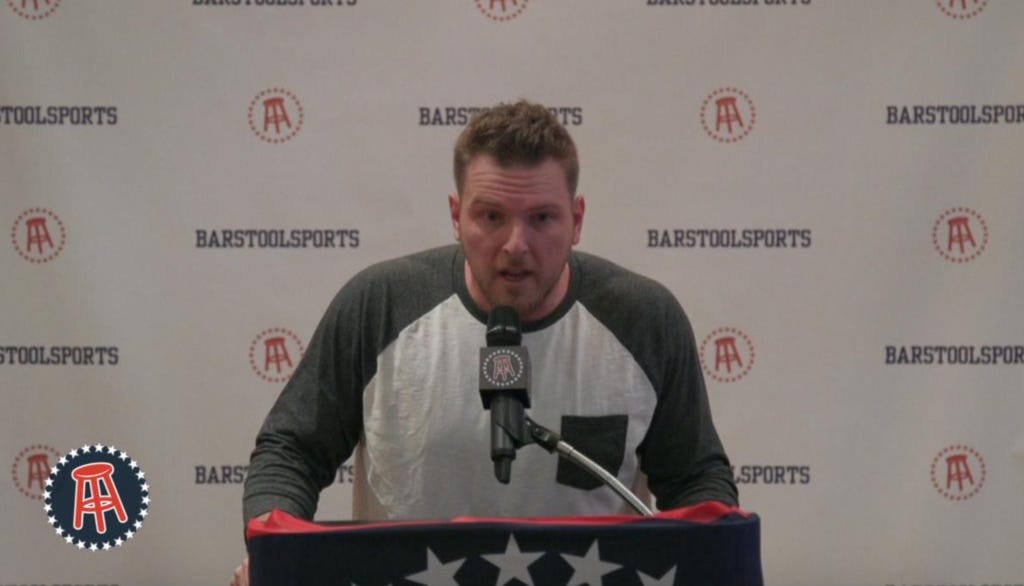 Retires from the NFL as an All Pro at age 29 in a televised press conference announcing his move to Barstool Sports.

Promptly drops the video of the week.

New franchise – #2Stools2Beers. Couldn’t be more pumped to have Pat on board and get many more of these in the near future.

Oh, and burying SB Nation nerds on Twitter in his first week. A rite of passage. 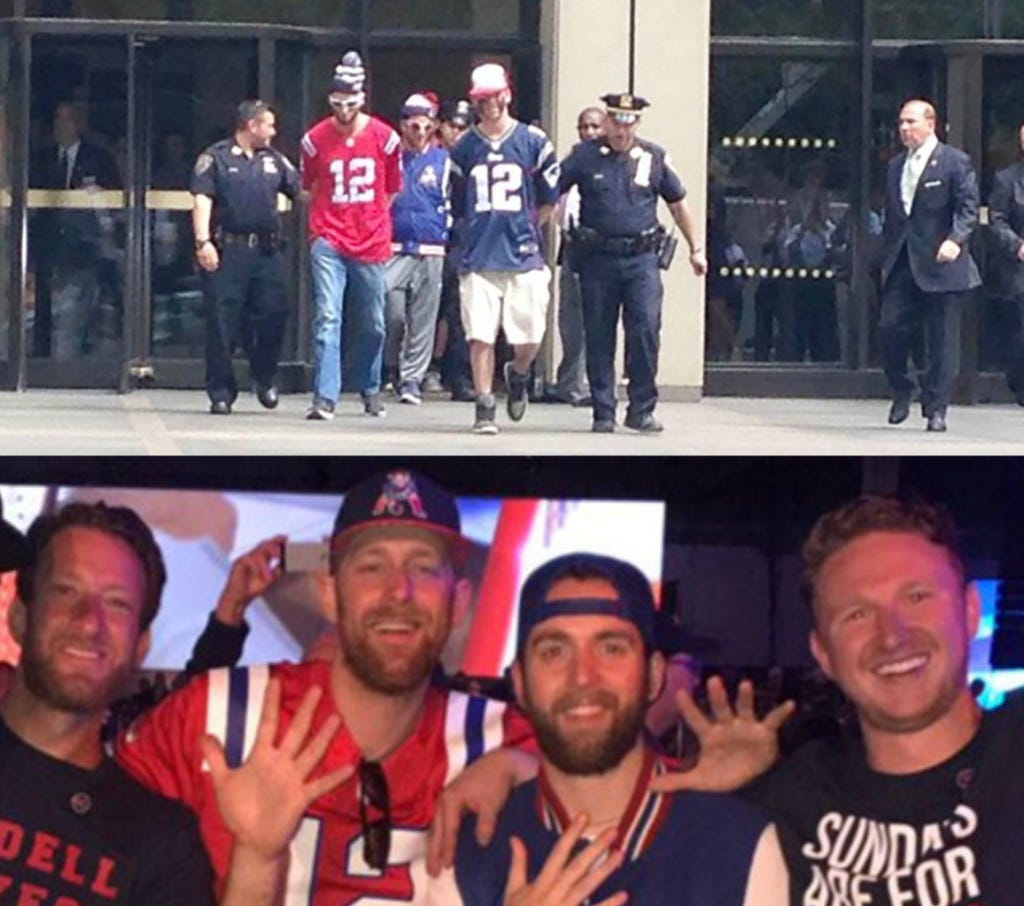 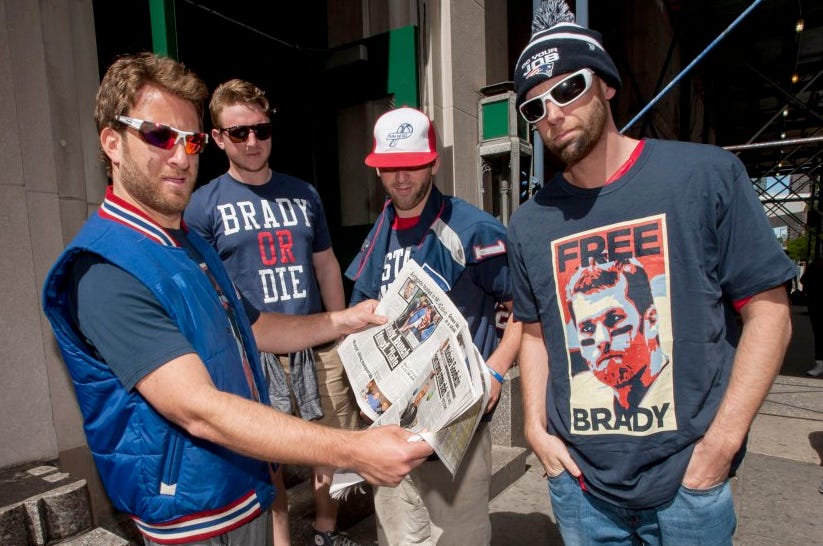 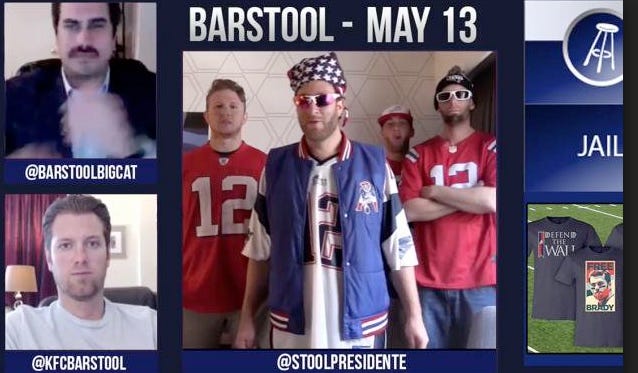 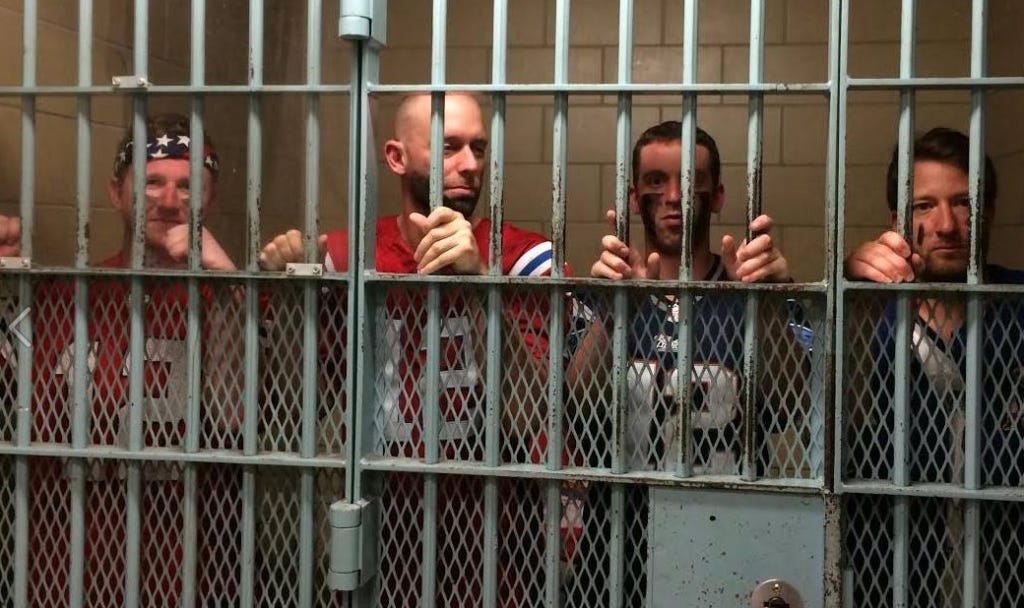 Love them or hate them, you gotta respect them. Going to jail for a football player then getting to watch that football player win the Super Bowl. Like they literally were put into handcuffs, put into a police car, driven to a jail and put behind bars for a night for the guy. Then they got to party in fucking locker room with him. That’s big time.

Also special shout out to our boy Matt Patricia making sure we stuck around in national headlines for a few extra days: 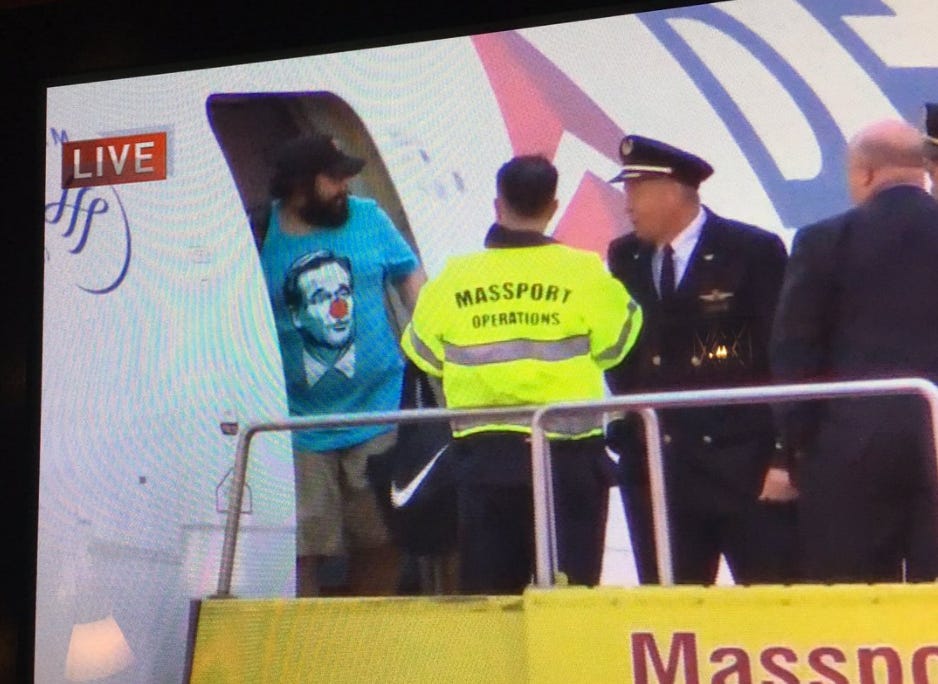 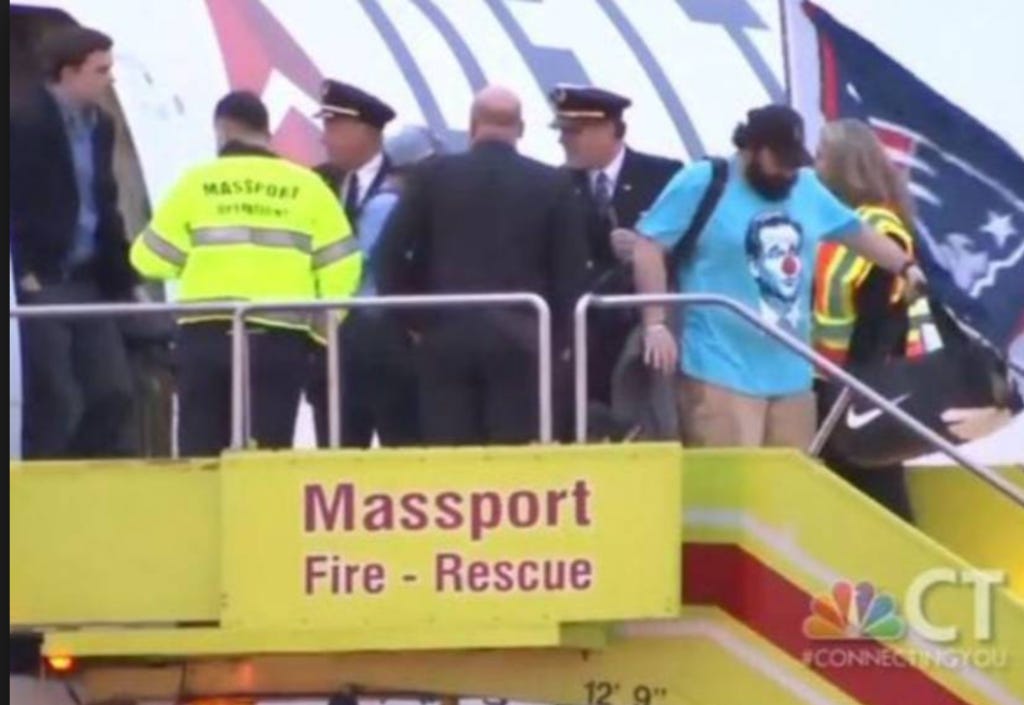 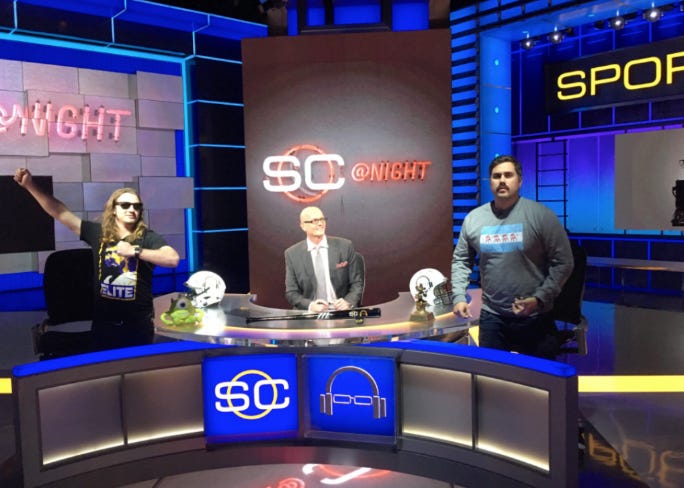 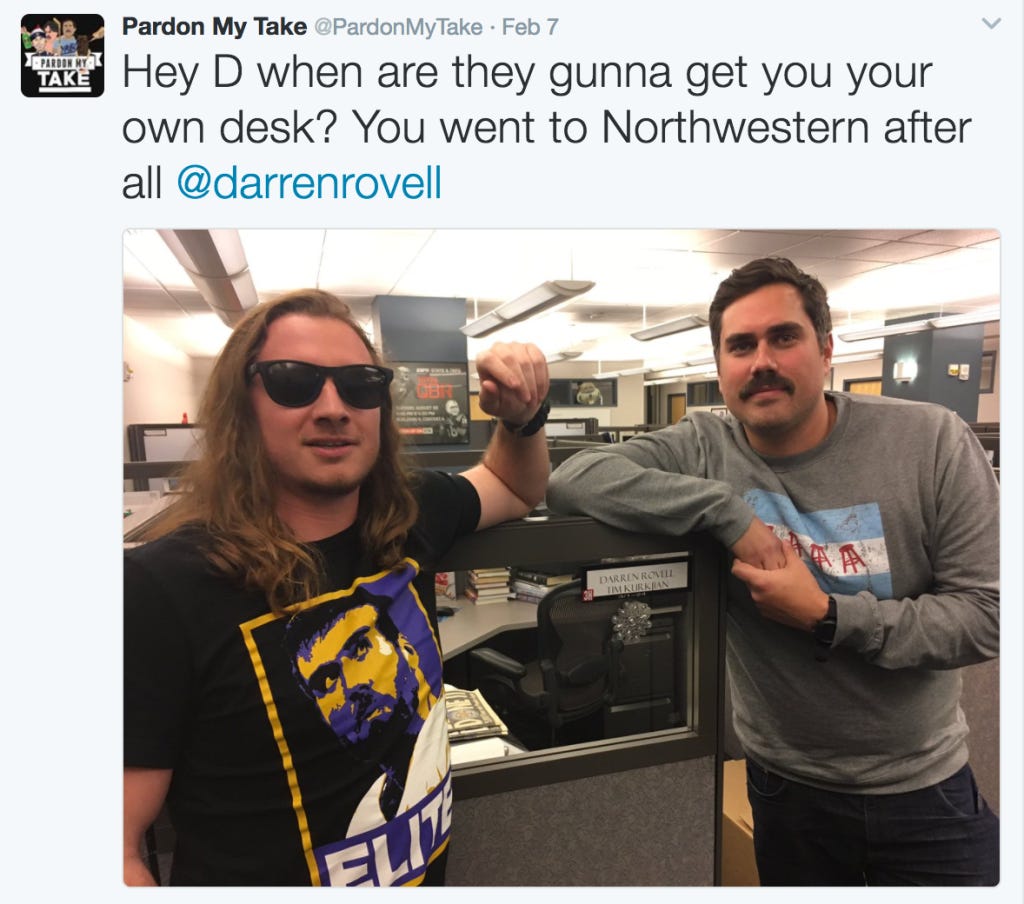 Been a lot of these “if you would have told me X years ago…” lately – Comedy Central, Sirius, the Chernin deal in general. Been a wild year. But if you would have told me 8 years ago that two of our guys would be on the premier ESPN show with a gigantic Barstool logo on the backdrop I would have slapped you in your face for being so unrealistic. But here we are – my friends Big Cat and PFT Commenter sitting on stage with Scott Van Pelt himself. A teaser for the show interrupting your regularly scheduled programming to show the two of them rapid fire dabbing in front of a highlight screen.

Look I love the guy but facts are facts. You can’t take a 13 week hiatus from the office and expect to stay in good standing in the office. I mean that’s like…over 3 months.

And what’s poor Caleb supposed to do without his partner in crime? Just sitting over there with his headphones on moping. Sad!

Gonna be a tough week for you when you lose all your boss’s cloths (sic). A Needs Improvement rankings was pretty much unavoidable the second Brett lost all of Club Dave’s nicest fake-skinny-tie button downs. Gonna have trouble getting into Tao on a Tuesday night without your best shirts. Sucks, but that’s the boss, and I gotta be a company man and give Brett his punishment here in the rankings.

Gave Brett a chance to address this over GChat because he always gets mad at me if I don’t get his side of the story first.

me: I know you like to give your side of everything so would you like to issue a statement for Needs Improvement for losing Dave’s clothes
Sent at 1:28 PM on Friday
Brett: haha “Dave’s clothes were stolen from the stairs in front of my apartment. It is my fault. Full responsibility. I still believe my uber driver stole them but he denies it. No security footage. I’ll go to Nantucket, I’ll go to Italy (ever heard of it), I’ll go to Napa, I’ll go to Hugo Boss (I’m not a Nazi – promise) on my own dime to replace Dave’s club wardrobe.”
Sent at 1:36 PM on Friday
Brett: actually no. just go with “I fucked up. It’s my fault”
thanks 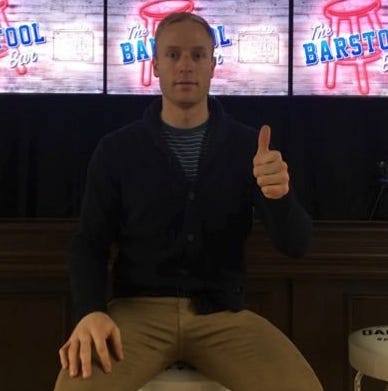 No, not even for faking cancer.  I’m sure everybody saw, but there was a “fire” at the office the other day.  It turned out to be a harmless little boiler incident in the building next door, but before we knew that it was actually kind of scary.   Very strong smell of smoke filling the office when all of a sudden Smitty starts running around saying there’s a fire.  Alarms going off and shit, guys coming over the intercom telling us to stay calm and remain in our workplace.  Everyone runs over to the window to see what’s going on outside and what do we see.

Yup just Francis already standing across the street with his jacket and bag on, all packed, calmly watching us possibly get engulfed by flames.  I guess he got advance warning of the impending emergency and instead of, you know, warning anyone, just casually grabbed all his stuff and bailed the fuck out of here.  Not really a #TheTeam, TheTeam, ThetTeam move imo.

I do respect the way Francis has taken the “death and horrible tragedy” stories from the news and turned them into his very own special franchise.  You don’t see that a lot around the internet.  Guy saves 4 drafts a day and 3 of them are about either a murder, a rape, a dismembered body, or a raped and murdered dismembered body.  It’s next level comedy.

Not sure what they did to this guy down in Texas but he came back real fucking fired up. 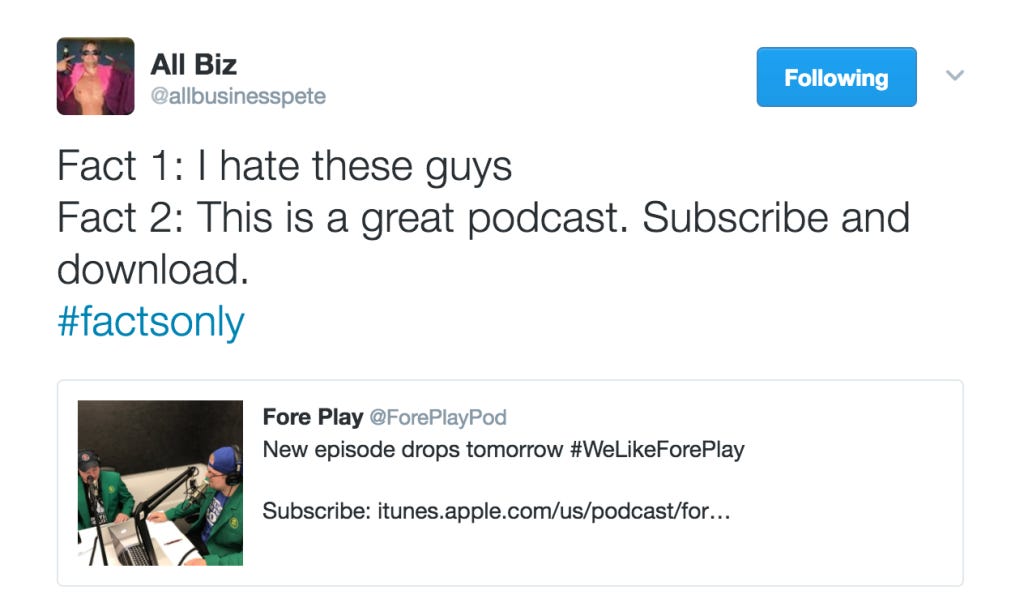 Pete’s one of those guys who is pretty quiet and bottles up all his thoughts and feelings and lets them loose on Twitter – I relate to that.

Here’s the thing, I’m actually not mad about Big Cat eating my Girl Scout cookies. What people don’t realize is I bought 12 boxes. 6 I took home, and 6 I left on my desk for everyone to enjoy. All I asked was that every time somebody came by to grab one they say “Thank You Keith” as loud as they could to properly acknowledge this nice thing that I had done. That’s all. I’m like an anonymous donor, doing things out of the goodness of my heart, but just needing instant public recognition for all of it.

Key word there thought – EVERYONE. They were for everyone to enjoy. Not just Big Cat who casually helped himself to 3.5 boxes of cookies. Yes, I came back and 3 boxes were completely gone, and one Do-Si-Dos was half empty. Unreal.

Guy goes on Sportscenter once and thinks the office is his for the taking.