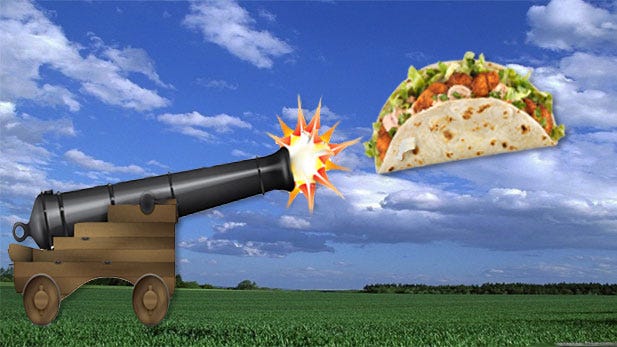 NY Post- A woman in Texas was allegedly so dissatisfied with her taco meal that she reportedly shot her boyfriend during a dispute over the food. According to KTRK TV, investigators say the woman and a male companion were at a taco truck in north Houston early Monday when the incident occurred. According to police, the woman became infuriated after she reportedly asked the taco truck worker to reheat her taco and was told no. Her boyfriend then tried to calm her down but the hungry woman then pulled out a gun and wound up shooting her partner. The man was shot once but investigators have not confirmed whether the woman shot him on purpose or if the gun fired accidentally.

I consider myself a part-time Houstonian after spending 8 days there last week. By day 5 I was walking down the street tipping my cap to my neighbors and the local breakfast spot knew my order when I walked in the door. But my main takeaway from the sabbatical is how much us Houstonians love our tacos. I was ready to go in guns blazing on the lookout for Barbecue at every corner and next thing I know I’m staring down all types of tacos. Breakfast tacos, street tacos, lunch tacos…you name it. It was a taco heaven. Like when Mario would bounce up to coin heaven, Houston is the taco version.

And the thing that was true no matter where you went, cold tacos are explicitly not allowed. You get shot in Philly if you’re given a cold cheesesteak, get murked in Baltimore if you get a bad crab cake, and there is absolutely no place for a cold taco in Houston. When I had a cold taco last Friday night after the Barstool Party, instinct took over and I tried to shoot the person who handed it to me. I didn’t have a gun on me, but I am confident that if I did I would have put a clip in the nearest person, so I feel this lady’s sympathy.