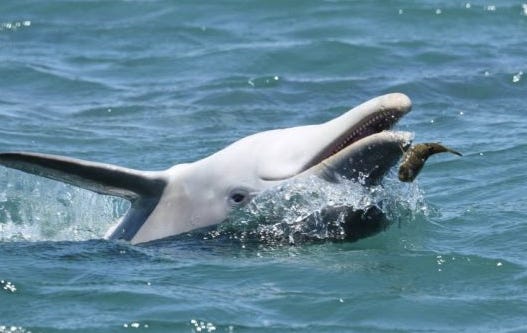 (Source) – In what can only be described as a youngster doing the ‘puff, puff, pass’, West Australian dolphins may be using blowfish – or ‘blowies’ – to get high, scientists have found. Murdoch University researcher Krista Nicholson, who monitors dolphins occupying the Peel-Harvey coastal waters off Mandurah, said there were several records of them interacting with blowfish in estuaries and coastal waters around the world. She said that in Australia, scientists had seen juveniles mouthing blowies in the Leschenault estuary in WA’s South West and a sub-adult dolphin carrying an inflated blowie for a few hours in the Kimberley. Blowies have a lethal toxin called tetrodotoxin, present in their skin, flesh and internal organs. If consumed, this toxin can be deadly to predators, including humans. A BBC documentary, Dolphins – Spy in the Pod, filmed them chewing on a blowie and “passing the puffer fish around”, she said. According to the documentary, small doses of the toxin have a narcotic effect and the program considered it as recreational drug use by dolphins.

But guess what? That’s not true anymore! I trust the shit out of my mammal brethren from here on out! I’ve always said one thing in my life and that’s if you don’t have a vice then I can’t trust you, I’ve just always been under the wrong impression that everyone under the sea was a bunch of goody-two-shoes fish bitches, fiddling around with whatchamacolits, losing their kids, and trying to eat me. Today I learned the dolphins are a bunch of blow addicts who risk death just for a little buzz like the rest of us.